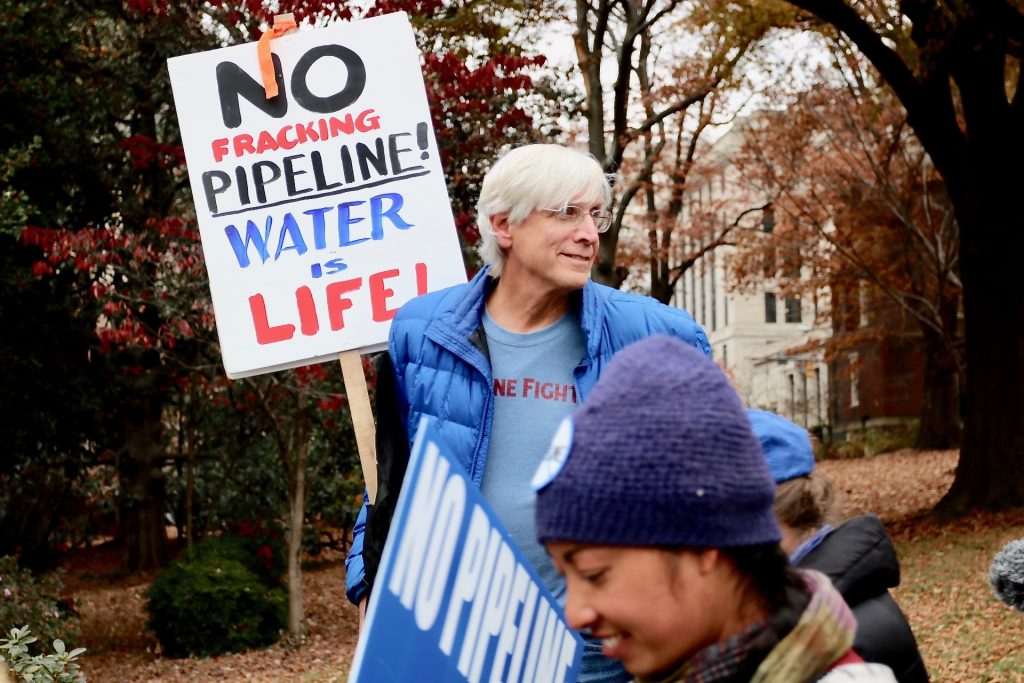 “It puts our water in jeopardy. No business has the right to infringe upon water, air, and things that deal with our land.” – Reverend Paul Wilson, Buckingham County, Virginia

Around 400 people descended on the bell-tower at the Capitol Building to protest the Mountain Valley (MVP) and Atlantic Coast Pipelines (ACP) this afternoon. The pipelines remain one of the most contentious political issues in Virginia due to the seizure of large swaths of private property in the western part of the Commonwealth by enacting eminent domain policies. And as recent as mid-November the Mountain Valley Pipeline, LLC has sued 300 landowners in south-west Virginia to confiscate land to erect their pipeline. Eminent domain is typically only used to take private property for public use by providing ‘just’ compensation. Yet in some narrow situations the code of Virginia indicates that a private property can be, “taken for construction, maintenance, or operation of public facilities by public corporations or by private entities provided that there is a written agreement with a public corporation providing for use of the facility by the public.”

The pipelines, however, have not met this criteria since there is no public benefit coming from their construction. So much so that both pipelines are now facing multiple court challenges from communities and individuals all over south and south-western Virginia as the issue waits for official ruling in December.

This sentiment was on full display by the landowners that traveled to Richmond from all parts of south and south-western Virginia who are in danger of having their properties seized. “So much of this stuff is driven by financial gain,” said Paul Wilson, a pastor from Buckingham County who was the first speaker at the rally. His church is in the direct path of the Atlantic Coast Pipeline and compressor stations that will accompany it, “the cost in human lives, leaks, ruptures, and spills far exceed the cost of all the financial incentives that big businesses claim,” he said.

Indeed, Dominion Resources stands to reap huge financial windfalls for the construction of this six-billion dollar antiquated oil and gas infrastructure that will be used to transfer fracked gas through the Commonwealth to markets outside of Virginia – negating any real long-term economic benefits for local citizens. This is what the oil and gas industry refers to as midstream operations, the transportation of hydro-carbon product through pipelines to their eventual export destination. In the case of landowners who will be victimized by these midstream operations – it comes in the form of easements – the purchasing of land parcels (under threat of eminent domain) which gives the energy company exclusive access to a landowners property whenever it so chooses.

Nonetheless, activists, water protectors, and pipeline fighters, some dressed in blue smocks to identify their struggle, remained defiant in the face of the corporate interests and their political allies. Mary Beth Coffee from Bent Mountain in Giles County embodied this spirit, “April 2016 should have been a cause for celebration, our last mortgage payment, our homestead was finally ours,” she went on to say, “But any sense of celebration was soon followed by heartache when we received an easement offer from MVP.” Her speech garnered cheers for her activism and leers against MVP whose easement offer would essentially drive her family from their home, “This proposed pipeline would completely bisect our property – it would be less than 300 feet from our house and well, obviously this would make our home unlivable.” She announced that MVP offered her only $7,000 for the easement, “the easement offer was a gut punch,” she told the audience.

The political class has been largely silent on the issue, with policymakers on both sides of the aisle being guilty of taking money from Dominion’s lobbyists. According to the Virginia Public Access Project, Governor-Elect Ralph Northam accepted around $72,000 in campaign donations from Dominion during the gubernatorial race. And in July while on the campaign trail he endorsed the ACP- so long as it got approval by the Federal Energy Regulatory Committee (FERC). These federal guidelines, along with state regulatory frameworks set forward by the Department of Environmental Quality (DEQ) have been called into question by environmental groups, however. David Sligh, another speaker and former senior engineer for the DEQ told the crowd, “DEQ has used flawed and incomplete information and analyses and recommends that the water board issue clean water act certifications that violate the law and abandon basic scientific standards that guide their decisions.”

The fight against the pipelines, the energy companies, and their political allies is an uphill battle that will set the tone for environmental policy in the Commonwealth moving forward for a generation. The next couple of weeks will determine this future. In the meantime, there is a new generation of young policymakers that have taken up the mantle of environmental justice and are not beholden to the monies of Virginia’s special interest. Before the march around the Capitol Building, Delegate Sam Rasoul from the 11th District in Roanoke told the energized crowd, “Don’t touch my drinking water…our environment is going to be raped by these two pipelines…what is going to happen to the area I call home?”