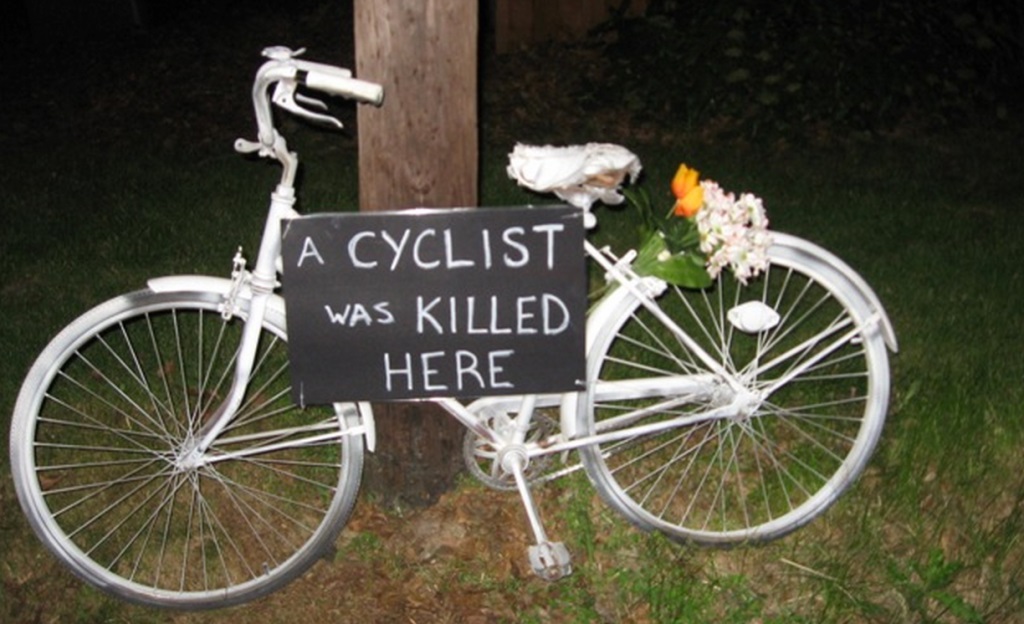 A Ghost Bike Memorial’s Removal, And What It Means For The Community

Years after the death of Lanie Kruszewski, a ghost bike memorial at the site of her death remained
an important tribute for her loved ones. Then a property owner decided to remove it.

Ghost bikes, existing as solemn reminders to drivers of cyclists killed on roads around the city, have been visible on our city’s streets for over a decade. Now a homeowner’s decision to remove a ghost bike memorial located on her property has sparked controversy within the Richmond bike community.

On a brisk morning in November of 2003, 15 bikes – their frames twisted and mangled, their fresh paint glowing an eerie white – appeared on the streets of St. Louis, Missouri. The broken bikes were chained to street lamps and road signs. They marked the intersections where cyclists had been struck by cars.

The man behind the “ghost bikes,” as they came to be known, was Patrick Van Der Tuin, a St. Louis-area cyclist, then 24 years old, who had grown fed up with the frequency of bicycle accidents in the city.

“I could put 100 bikes around this city,” Van Der Tuin told the St. Louis Post-Dispatch in 2003. “There’s no shortage of locations.”

The Ghost Bike Project quickly gained traction, spreading to Pittsburgh in 2004, New York in 2005 and Toronto in 2006. The most recent data shows over 630 ghost bike memorials in 210 locations around the world, from Austria to Ukraine.

Ghost bikes serve two functions: to memorialize the riders killed by vehicles, and to serve as a reminder for drivers to be cautious of cyclists on the road.

Although Virginia is ranked tenth in the nation for bike friendliness, the commonwealth is no stranger to the Ghost Project, with memorial sites in cities including Charlottesville, Fairfax, and Virginia Beach.

The first ghost bike in Richmond, it seems, memorializes Richmond music legend Jonny Z. In March, the city remembered VCU student Corey Frazier with a ghost bike chained at the intersection of Rowland and Main. In 2012, the night Lanie Kruszewski was killed, a ghost bike appeared on River Road in her honor.

There it remained, looming out of the darkness as you round the bend along the winding road, untouched for more than six years. Until earlier this month, when David Pangraze, a corporate sales executive for Nike Golf, removed it.

“The ghost bike apparently went up the day after Lanie died, but I didn’t know about it or see it for awhile,” said Lanie’s mom Patty Kruszewski. “I have very little memory of that week; I was a zombie. The first memory I have about the ghost bike was the memorial ride held on the one-week anniversary.”

The bike was on city property, but Pangraze said in a complaint to the city that he believed the memorial to be a “traffic hazard,” the Richmond Times-Dispatch reported. Pangraze could not be reached for comment for this story.

When Pangraze approached Kruszewski a year ago about replacing the bike with a sign, she began soliciting opinions from community members. Kruszewski met many of those who responded for the first time.

“They learn I am Lanie’s mom, [and] they often say, ‘Oh, I pass your daughter’s bike all the time,’” Kruszewski said. “That’s how they think of it, as Lanie’s bike.”

According to Kruszewski, Pangraze is the only person who ever complained about the bike directly to her – the first she heard of the only other official complaint was after reading the initial Richmond Times-Dispatch story. Kruszewski says she overwhelmingly receives nothing but support for the memorial.

“Even to people who never knew Lanie, it’s an icon, in a way that I think a sign could never be,” she said. “For those of us who knew Lanie, the bike is almost sacred.  It’s not just a memorial to her, but a comfort; a place people can take a moment out of their day and remember Lanie as they pass.” 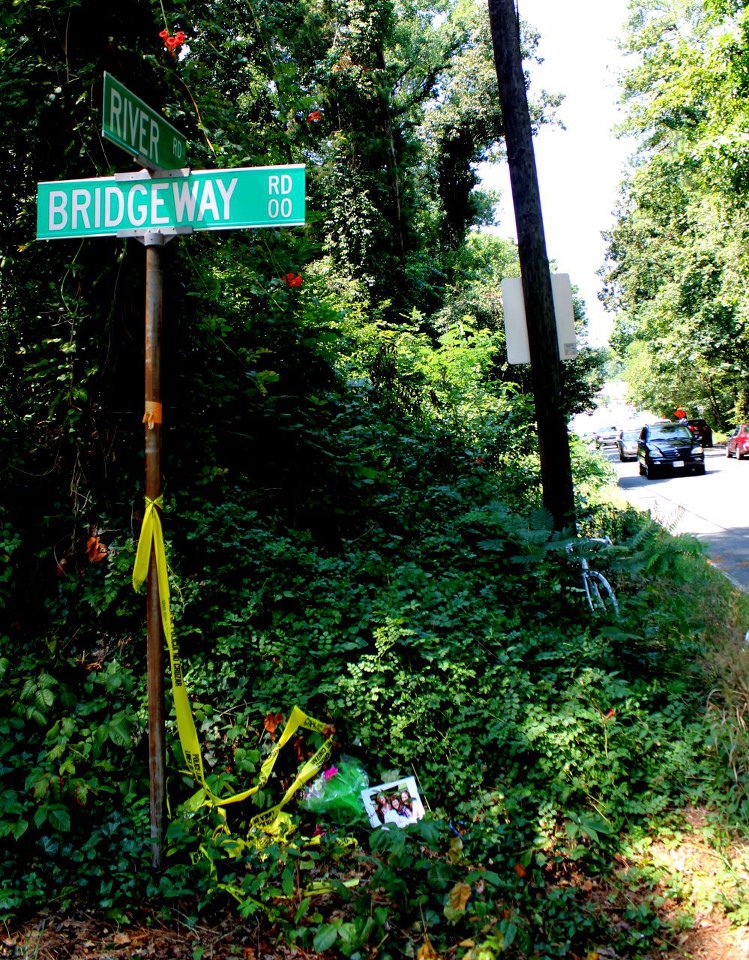 The ghost bike is especially meaningful to Lanie’s family. It’s visited most by her mother and her boyfriend, Daniel.

“I bring a group of friends there every July 29, [the anniversary of her death], to decorate the bike with lights,” Kruszewski said. “Often we are joined by people who were involved in the 2013 trial, or by the police officer who was first on the scene. I think it’s therapeutic for all of us to spend some time there.”

For Patty Kruszewski, Lanie’s bike isn’t just somber reminder of a terrible tragedy or a reminder to distracted drivers to be on the lookout for cyclists – the ghost bike is a little bit magic. A nurse who worked the night shift in 2012 told Kruszewski that for a whole week after Lanie’s death, she saw a fox at the bike.

“That reminded me that a fox once ran very close to Lanie’s tree in Hollywood [Cemetery] once, about 10 feet from me, in broad daylight,” Kruszewski said. “So now I’ve connected the fox to Lanie, and think of it as her spirit animal.”

Those who knew Lanie say she packed more living in 24 years than most people do in a lifetime. She was passionate about health, fitness and cooking. She could talk to anyone.

“I would sometimes drag her to business events or historical tours, or to my office, when she was in high school,” Kruszewski said. “But instead of being bored, she’d end up in animated conversations with people two or three times her age.”

That Lanie was killed by a distracted driver was ironic – her passion for health extended to encouraging others to practice safe driving habits.

“Lanie… didn’t like my habit of talking on the phone while driving – a habit I quit cold turkey after she died,” Kruszewski said. “Whenever she was riding with me and I would reach for a ringing phone, she was quick to snatch it up and tell the caller, ‘Mom’s driving; this is Lanie. What would you like me to tell her?’”

Patty Kruszewski plans to continue fighting for the return of the ghost bike, other memorials and bike friendly legislation.

“I don’t think there can be such a thing as raising too much awareness when it comes to the need for respect for cyclists, or for safe driving,” she said. “But I won’t rest until we have a ghost bike back at the site where Lanie died. It’s where Lanie spent her last moments on this earth, and it needs to be marked with a meaningful tribute – one that is worthy of someone as special as she was.”

“I believe that Lanie’s presence is still felt in so many ways, and that her influence and inspiration have continued to grow since her death. Although there’s no way to know, I also like to think that she might have saved a few lives.” 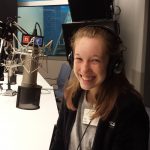