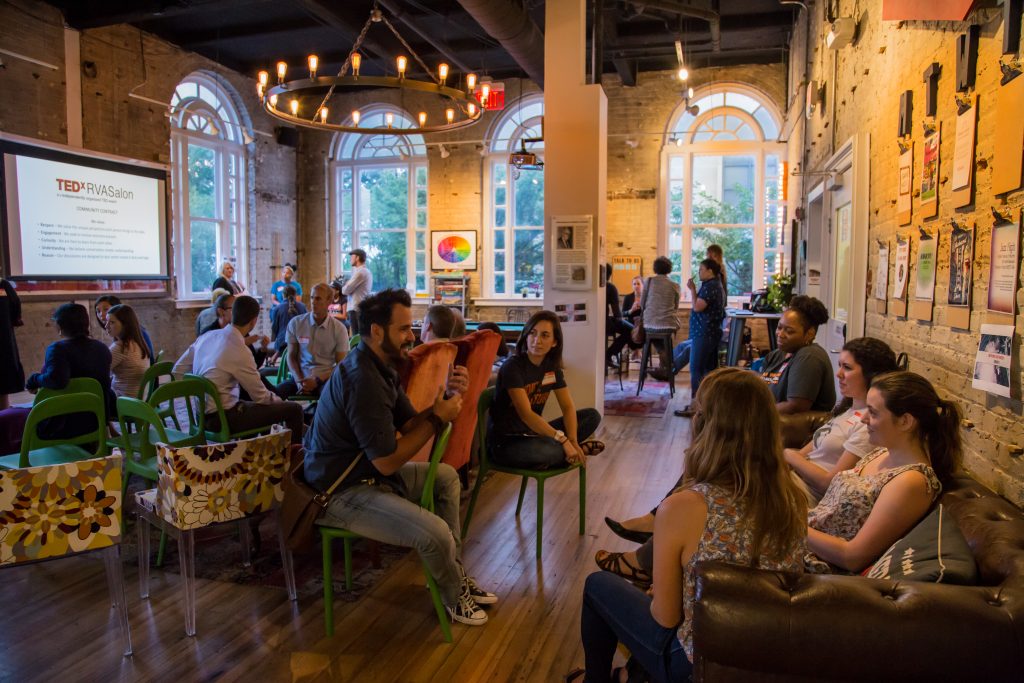 “Happiness, Connection, Adventure, it’s all right where we are.” These were the words of Ginger Kern from her Tedx event in Brookings, SD, which was viewed by the crowd of 40 at the TedxRVA salon held at HI Richmond Hostel. With a welcoming air, pleasant lighting, and decorated exposed-brick walls, one might not realize the venue was previously a women’s detention center.

The 7th TedxRVA salon was held on August 30 with the topic of the benefits of travel. Beyond Our Borders was the formal name of the event, yet the title wasn’t meant to only be taken literally. 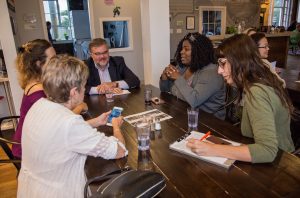 The event kicked off with a viewing of a TedEd video: The Point of Travel, which explored finding meaning through travel. This set the direction for the rest of the night. Attendees were then split into several groups in which group leaders led a discussion and prompted reflection about travel, usually tying it to one of the four Ted Talks viewed during the event.

Traveling doesn’t just involve far away lands and exotic locations; it can be a simple as exploring a person’s own city. “Thinking about experience at home–are there places we don’t even visit at home? Not different countries, but different parts of the city we don’t get. So what are we missing out on?” asked Todd Waldo, producer of TedxRVA and one of the group leaders of the evening. “Maybe I don’t go out to Southside, maybe I don’t go to rural places. What do we miss by not getting a chance meet those people, learn their experiences, and making those connections even at home?”

Richmond is the perfect location for this kind of domestic travel. This city is known for craft breweries, outdoor recreational activities like Belle Isle and Texas Beach, its eternally blooming art scene, and being a central hub to several prime locations. “You can get to D.C. realistically in an hour and a half. You can get to [Virginia] Beach, Hampton, and North Carolina in a reasonable time,” said Corey Love, 31 a Hampton native who has resided in Richmond for the past two years. 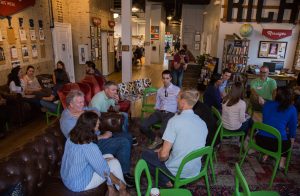 This doesn’t take away from the wonder and awe which can be experienced through exposure to foreign countries, cultures, and people. “Going to Israel was one the most powerful experiences; experiencing the three major religions [Judaism, Christianity and Islam] coexisting in a peaceful way,” said Lucy Joseph, member of the TedxRVA community and curator of the night.

This was reflected by the sentiments of Aziz Abu Sarah, a Palestinian, whose TedTalk focused on his transformation into a tourism entrepreneur after spending time with Jewish students. This also helped him overcome bias stemming from the Israeli/Palestinian conflict that has been active since 1948, along with a shared love of country music. “I decided to dedicate my life to bringing down the walls that separate people,” Sarah said, re-emphasizing the night’s theme of going beyond our borders.

The pragmatic challenges of travelling were also addressed, and the TedTalk given by Luis Varga highlighted how travel is sometimes hampered by money, children, or both. However, he also talked about the charm of traveling with children. Leah Coleman of Dodson Properties LLC, who was also attending the event, said, “ Once I started a family, I wanted to give them an experience of the world and where we can see it going in the next two decades.”

Children are open to suggestion, and their early experiences will shape their worldview later in life. “Yes it is more yes difficult and expensive, but I really think it is a high priority for people to continue to travel with their children to give them an experience,” said Eric Terry, President of the Virginia Restaurant, Lodging & Travel Association (VRLTA), who was also at the event. 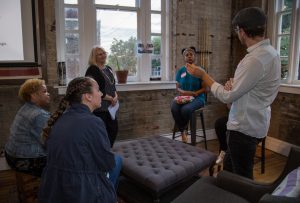 TedxRVA salons always focus on  thought provoking subjects, but the organizers wanted to use address something a bit more topical. “We decided, let’s do something lighter a little bit. The last topic we did on something like this was on food,” said Patricia Bradby, the TedxRVA community lead. This came in the form of samosas, spring rolls, Papri Chaat, and other cuisines that also highlighted the benefits of traveling. Ultimately nothing brings a group of people together like food does.