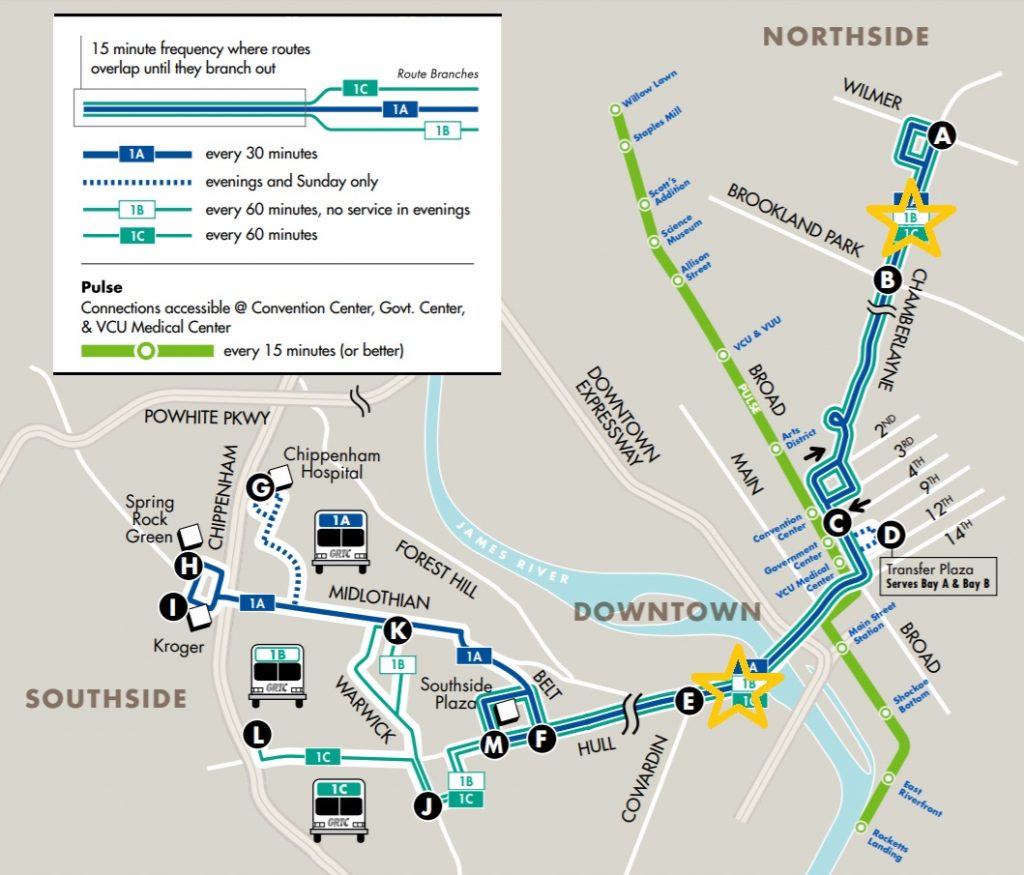 The first installment of a monthly series in which a hometown Richmonder who has spent over a decade abroad explores the many different neighborhoods accessible by GRTC bus lines to find the ways GRTC connects us all.

Walking down Hull Street it doesn’t take much imagination to envision Manchester in its glory days as the seat of Chesterfield County — and later a proudly independent city — that flourished in the Reconstruction era.

Manchester Courthouse and the Mechanics & Merchants Bank remind visitors of the building boom and prosperity of the 1870s and ‘80s, as newly freed blacks abandoned plantations to find work at the city’s bustling docks, to open shops and eateries, and to make something of their newfound freedom.

The Late Gothic Revival style of the First Baptist Church of Manchester (today “South Richmond”) personifies the confidence and hope of the day that inspired our city’s oldest independent black congregation to build such a grandiose church along Manchester’s main boulevard.

The shuttered storefronts and dilapidated homes tell a very different tale today. Beyond Manchester’s remnants of grandeur, one begins to notice a pattern of neglect. It may be tempting to blame individual property owners or generic urban decay; however, such facile logic belies the systemic abandonment of “Dogtown” — the derogatory nickname Richmonders came up with for their Southside sister city.

After the Supreme Court ruled “separate but equal” schools unconstitutional in 1954, wealthy whites began to flee urban Richmond in favor of the mushrooming suburbs of Chesterfield, Henrico, and — to a lesser extent — Hanover. The failure of Massive Resistance only expedited the trend, leaving large swaths of Manchester abandoned.

Since the 1930s the federal Home Owners Loan Corporation deemed Manchester investment grade D due to its “infiltration of a lower grade population” (read: blacks).  This practice of redlining excluded residents from mortgages and other lines of credit available to those who lived in wealthier and whiter neighborhoods.

The Urban Renewal policies of the 1960s struck another blow to Manchester as federal funds financed the removal of “blight” (i.e. dense, black communities) in favor of public housing like Hillside Court. In the decade after the Housing Act of 1949, 425,000 units of housing were demolished in black communities across the country while only 125,000 were built.

Suburbanization meant retail flocked ever further south and west, with the construction of Southside Plaza and Cloverleaf Mall, respectively. Several smart investors recognized the opportunity in Manchester and opened pioneering Southside businesses like Croaker’s Spot and Legend Brewing in the 1980s and ‘90s; however, the revitalization of this charming historic neighborhood didn’t truly take off until the early 2000s.

The establishment of the Manchester Historic District and the rezoning of the area’s former tobacco warehouses to loft apartments triggered a wave of investment. The expansion of Capital One and the addition of amenities like the Floodwall Walk and the T. Tyler Potterfield Memorial Bridge have brought new attention, new residents, and new tensions to Manchester.

The renovated Hull Street Library, Dogtown Dance Theater, and all the sleek new lofts represent the dawning of a new era for this Southside neighborhood. The Manchester food scene may soon become its own genre of Richmond’s culinary boom, thanks to standouts like Camden’s Dogtown Market, Pig & Brew, Ironclad Pizza, Soul-Ice, and the Butterbean Market & Cafe.

Across the street from the Butterbean & Hot Diggity Donuts, the owners of those two establishments are also opening Dogtown Brewing Co. — complete with a scenic, fourth floor rooftop bar that feels like something from Washington, D.C.’s U Street.

Your correspondent began his day with a delectable $3.25 cup of cold brew from Brewer’s, a sum on par with any other quality coffee shop in the city that still feels unattainable to many who live in Manchester. Just across the street from Brewer’s, new housing is going up, filling a block long left empty with new life.

This is the contradiction of modern Manchester.  The area’s sprigs of growth promise a better future and higher quality of life, but many of today’s residents question whether they will be able to afford to stick around and enjoy it in a decade.

After boarding GRTC’s 1A at Commerce Road, your correspondent enjoyed the river views while crossing the Mayo bridge, trundled through Downtown and up Chamberlayne Avenue, and alighted the bus in Ginter Park at Westwood Avenue in under twenty-five minutes.

While visiting Melbourne, Australia in the late 19th century, tobacco magnate Major Lewis E. Ginter was awestruck by the lifestyles of the local elite, as they retreated each evening after work back to their country manors. Upon his return to Richmond, Ginter acquired several hundred acres of farmland in Henrico so he could realize his dream for a suburb “where a gentleman could ride to and from work without the sun’s glare in his face.”

Ginter immediately set about crafting his eponymous neighborhood in a meticulous manner. First he laid out an extended street grid and divided the parcels into single-family lots, so that each new resident could build their home of a size and style of their choosing. Next he gifted Union Theological (today “Presbyterian”) Seminary a large plot of land at the center of the community in order to lure them from Hampden-Sydney in Farmville and serve as the anchor of his development.

Unfortunately, upon the magnate’s death in 1897, only a few cottages had so far been constructed. Ginter Park wouldn’t begin to boom for another decade. Post-1908, construction raced along until a brief slump during World War I, but quickly picked back up during the Roaring Twenties. This prolonged period of building created a rich architectural legacy, with homes ranging from humble cottages to grandiose mansions.

To this day, Ginter Park remains one of the best parts of town to explore a wide variety of styles nestled comfortably together: Spanish Colonial, Arts and Crafts, Bungalow, American Foursquare, Queen Anne, Colonial Revival, Shingle Style, and Tudor Revival.  The elite status a Ginter Park address conferred led Richmonders to dub the neighborhood “the Queen of the Suburbs.”

The rise of the automobile and the desperation of the Great Depression caused residents of Ginter Park initially to welcome Chamberlayne Avenue’s designation as U.S. Route 1 — the great North-South corridor that served as the precursor to I-95. However, the resulting heavy traffic and many large trucks began to deteriorate residents’ quality of life and destroy the fabric of the neighborhood.

By the end of the 1950s, many of the area’s once-luxurious manors and mansions had been converted into tourist homes and nursing homes, or were completely demolished in favor of multi-family apartment complexes. Much of the rezoning which so tragically altered Chamberlayne Avenue’s character excluded the rest of Ginter Park, thus allowing the majority of this verdant suburb to dodge ugly redevelopment.

Although former Governor Doug Wilder and Senator Tim Kaine call Ginter Park home, perhaps the legacy of the area’s other most famous resident, Joseph Bryan, best encapsulates the arc of the neighborhood’s character. The newspaper man behind the Richmond Times bought land off of Laburnum in 1883 and built himself a palatial brick mansion, which the Bryan family later donated to Richmond Memorial Hospital. After serving as the hospital’s east wing for decades, the entire structure was renovated in the late 2000s to become luxury condominiums.

With multiple massive apartment complexes in the pipeline for Brook Road and Chamberlayne Avenue, one can understand the apprehension of Ginter Park’s residents toward further development, even if one may not agree. For many, their neighborhood’s delicate balance between historic homes and condo complexes hangs in the balance.

If Richmond pundits were right that the debate over the Brook Road Bike Lane was really a referendum on the future direction of the area, then the resounding defeat of Councilmembers Gray’s and Hilbert’s ordinance to block the bike lane may signal Northsiders’ increasing demand for the dense, walkable trappings of New Urbanism — the currently en vogue planning movement towards sustainable, mixed-use communities.

Walking along Ginter Park’s many leafy lanes, it’s not hard to imagine all the empty lots and aging apartments being replaced with more tasteful, denser housing in the coming decades. Indeed, if the GRTC Pulse ever expanded to include a North-South route, the lure of a convenient commute from Northside through to Manchester may prove irresistible for developers and locals alike.

After Attorney General Mark Herring's ruling that Virginia colleges and universities can mandate that students and faculty get a COVID... READ MORE

One year ago, students at several Virginia universities were on spring break when they received notice they would not return to campus.... READ MORE

After Attorney General Mark Herring's ruling that Virginia colleges and universities can mandate that students and faculty get a COVID... READ MORE

One year ago, students at several Virginia universities were on spring break when they received notice they would not return to campus.... READ MORE