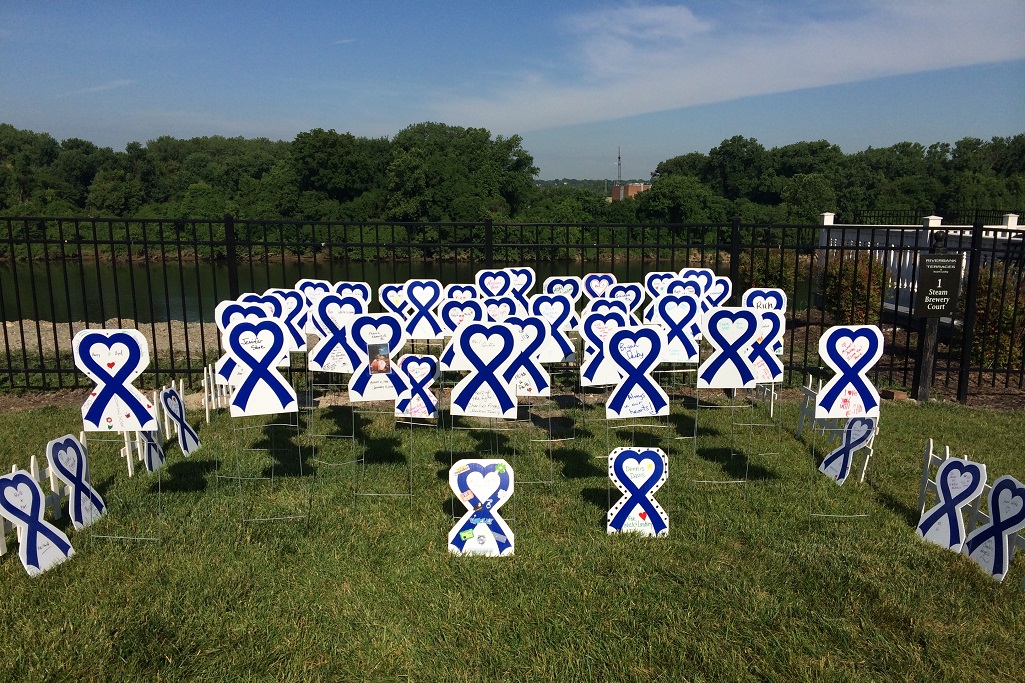 When Rich Conklin passed away in January of 2011 due to colorectal cancer, his wife Mindy Conklin, who was a county mental health therapist, found she needed to take a step back from her work. “During that time I thought, you know what? There is no organization that brings out information on colorectal cancer,” Conklin said.

That’s when she decided to create Hitting Cancer Below the Belt (also known as HCB2), in order to offer events and services bringing awareness and education to cancer prevention — in particular, colon cancer. Conklin now serves as the founder and Executive Director of HCB2. HCB2’s goals are to provide education, offer early detection services to uninsured people in particular, and help support patients and survivors of colorectal cancer.

Unlike many other forms of cancer, there tends to be a great silence surrounding colorectal cancer. Given that it’s one of the most treatable and curable cancers according to the NIH’s National Cancer Institute, the silence needs to end.

“When I hear that cancer rates are declining… that’s great, but not my cancer! Not mine,” says Conklin. “And this disease can be easily beatable, treatable, and preventable, if there wasn’t so much silence.”

“There’s a huge amount of silence that’s wrapped around the disease coming in from all angles,” said Conklin. “There’s silence about the diarrhea, and the blood in the stools, and the constipation, bloating, because nobody wants to talk about that.” However, the scariest silence may be in regard to symptoms. “Sometimes you don’t have symptoms, so there’s silence there,” said Conklin. This silence is what causes the downfall of many, one of them being Officer Neil Griffin.

Neil Griffin was a member of the Henrico police force for 17 ½ years. “It’s important to know being a police officer wasn’t his career,” said Neil’s brother, David Griffin. “It was an integral part of who he was.” Neil Griffin initially became a police officer with the intention to move over to the FBI to pursue forensics. However, when he was assigned to be a School Resource Office (SRO), he quickly learned that he was where he was meant to be.

Neil’s job as an SRO was everything to him, and he took his work above and beyond. “He never complained, he loved his job,” said Tracy, Neil’s sister-in-law. Much of what Neil did as an SRO was not part of the job description, but he loved to do it regardless. If a student didn’t have someone to support them at an athletic game, Neil would be there for them. “Neil set up what I would call play dates with one struggling young man,” Tracy explained. “Two mornings a week, they would show up early to play chess.” It was the small things he did that made a difference in kids’ lives. However while work was everything to Neil, he soon encountered a great obstacle that made daily life a challenge.

Neil was 42 when he was diagnosed with colorectal cancer in January of 2013. “He didn’t meet any of the criteria for a normal screening,” said Tracy. “But once you start piecing stuff together, he had signs and symptoms that, had either he had more awareness, or we as a family had more awareness, we may have been a bit more in tune, that ‘maybe he shouldn’t be popping Tums like they are candy; we should get this checked’.” This is why early detection can be so important. “His medical team said at the end of the day, it was likely his tumor started in his late 20’s,” said Tracy. “When he was diagnosed in 2013, he was stage 4.”

However, while he took his diagnosis seriously and tried several methods of treatment, Neil also took his job as a police officer very seriously, and wanted to miss as little work as possible. “He arranged all of his care so that it was as minimally disruptive to him being an officer as possible,” said Tracy. “He started his chemotherapy on Fridays and wore an infusion pump all weekend so he wouldn’t have to miss work.” He didn’t quit until the winter of 2015, when his body forced him to stop working; “his body gave out before his spirit did, unfortunately,” said Tracy.

Each June, Hitting Cancer Below the Belt Inc.’s Boxer Brief 5K run/walk raises awareness for colorectal cancer, bringing education and support to stop our country’s second-leading cancer killer for both men and women. “We are really zoned in,” said Conklin. “This is truly a time to come together, raise each other, and celebrate that energy, whether they are battling, or whether they are gone. It’s become a defining moment in regards to support.”

Tracy Griffin in particular remembers the race from 2014, when the organization had a memory garden to honor those who have lost their fight, as well as those who were still fighting. It’s a very special time for those who are struggling, or have struggled, to come together as one and support each other, while also creating awareness for an important cause.

“The 5K has really grown, especially over the last couple years,” said Conklin. “[It’s] not just an awareness and educational piece for the community, but truly about providing a place for mourning and an environment for all the family, the loved ones, and those who are challenged with the disease to be loved on.” For Neil and the rest of the Griffin family, this couldn’t be more true.

The race this June will be the 8th race annual event, and the 7th year the Griffins and “Neil’s Squad” will be attending. “We started it with Neil,” said Tracy. “It was part of his declaration of ‘I’m gonna fight this thing,’ which, God love him he did.”

Now, years after Neil’s passing, the Griffins continue to participate in the annual event. “[We do so] to help others understand that there’s something about fighting,” said Tracy. “You have to at least try.” She also hopes their continued participation will send a message to her children as they grow — a reminder to  “be vigilant about their health,” she says. “Making sure they know how important it is to take care of themselves, and advocate and take care of those around them.”

The annual race draws in supporters, mourners, people who are currently fighting colorectal cancer, and survivors. Many race as part of a team; each team focuses around what HCB2 call “heroes” — those who have been diagnosed and are still fighting, those who are in remission, and those who have lost their fight. “Last year they [lost] two heroes, one who passed away Thursday, and one who passed away at about 5am” on the day of the race, said Conklin. All members of both teams still attended the race in order to honor their heroes.

20-30 percent of participants are survivors coming out to walk. While there might be a few dozen out of the hundreds that participate in order to set a fast time, most people are just coming out to support a hero and to help raise spirits.

The Griffins plan to attend for years to come, and every year will be a continuation of “Neil’s Squad.” For many others, each year commemorates the legacies of their own heroes. And for HCB2, the Boxer Brief 5K will continue to provide an opportunity to engage in education, support, and, raising awareness about colorectal cancer.

The next HCB2 support event, Strike Out Cancer, is a bowling tournament to be held at Bowl America Southwest on Wednesday, February 12 from 4 to 6 PM. For more information, including how you can donate, visit HCB2’s website.

Emily is a senior at Randolph-Macon College majoring in English. She is captain of the cheer team and works part time at a daycare. In the future, she's looking forward to traveling outside of Virginia while pursuing a career in writing features.