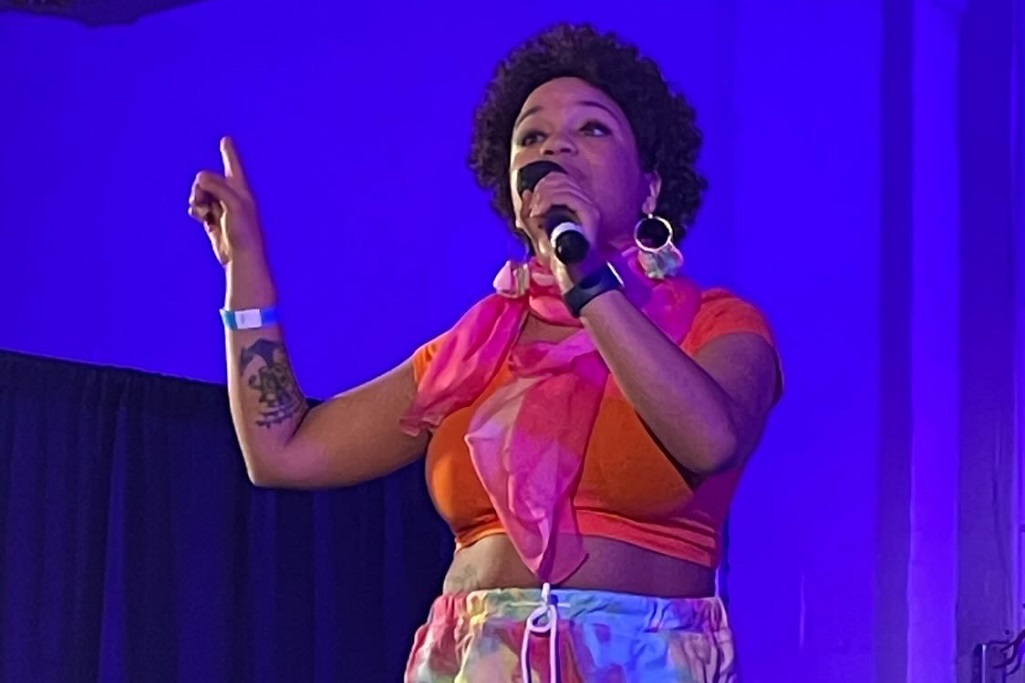 Hello reader! This week I got to talk with one of the hardest-working funny people in Richmond, Rieka Speaks. Standup, sketch, improv, host, show runner, writer, spoken-word poet — she does it all, and is on a mission to bring Black feminine comedy and entertainment to the forefront. She is a regular at a lot of the open mics around town, picking up spots at some of the hottest mics locally, and has become a prominent figure in the local comedy community. She has hosted for national acts at Sandman Comedy Club and show no signs of slowing down.

I’m glad I finally got to do this interview. Rieka Speaks has been putting in a lot of work. The buzzing comedian says she grew up loving All That and a lot of Nickelodeon programs but also couldn’t help but say “FUCK DAN SCHNEIDER!” We talked about her time in LA, her love for sketch comedy, and the differences between standup and improv/sketch comedy. Here’s our conversation:

Gabe: How long have you been doing comedy?

Rieka: I’ve been doing comedy since 2017. I guess it’s a little over five years now. And yeah, I started with comedy in Richmond. Since then, I’ve been doing standup, sketch comedy, improv, and I’m a poet as well. So, sometimes I’ll morph the two and do poetry and comedy every now and then.

Gabe: You did great. I remember them saying you had spent some time out in the west coast, in Los Angeles.

Rieka: Oh yeah. So, I lived in LA from June 2018 to 2021, and I moved back here. I moved to LA for a job, and then that contract ended. So, I came here for another job. In my time, I focused more on sketch comedy, so I was part of two different sketch comedy teams. One was Soul Sista, which I was in there for a couple of months, but I had more of a long run with the Color Collective. Both of the sketch comedy teams focused around having people of color. Basically it’s at the forefront. And with the Color Collective, I wrote sketches and also acted in sketches, and then also did a lot of the social media stuff for them before I moved back over here.

In LA, I was more focused on sketch. I did still do standup, performed a couple of things, and performed in a Black Woman in a Comedy Festival in LA, but since I’ve been back here, I’ve put more focus on standup. But I’ve also started a sketch team, which I’ll talk a little bit more about as the interview goes on.

But LA was fun. Definitely want to go back one day. I don’t know if I would live there again, but it was fun to do a little bit of something different. Like, to do sketch comedy, because I think that’s my true love, sketch comedy.

Gabe: Nice. I did see on your Instagram that you’ve recently started a new sketch comedy group, right?

Rieka: Yes. It’s called Issa Rae’s Daughters. We just created an Instagram. I am the co-founder of it along with my comedic friend, Jasmine (Jazabelle), who also does a lot of work with the Coalition Theatre. More on the improv side. But it’s the sketch comedy team for Black women, run by Black women. And we’re hoping to have our first live show in February of 2023, but hopefully one of our videos/sketches will come out later this year. So, it’s a mix between doing film, video sketches, and also having live performances. But we just really wanted something specifically for Black women, and non-binary Black folks too. But more so, I guess, leaning on Black women.

Gabe: What are the shows you have on a regular basis right now?

Rieka: Yeah. I hosted an open mic at The Writer’s Den. They have an open mic every Friday of the month, but my specific show that I ran was every third Friday. And it’s an open mic/Rieka’s Ruckus Comedy Show, which is a mix of standup comedians and also improv comedy. And the format changed a little bit every now and then, just to work with what the crowd wants. It’s was either at Sunday Service Soul Food or Fountain of Youth. They both basically took the same spot — right beside each other and that every third Friday. The open mic is open to any type of performance. And then the comedy show is after that, which featured some local stand-up comedians. For upcoming events and info, folks can follow them on Instagram @thewritersdenrva.

But, a big update, I will be hosting an open mic at Garden Grove [Brewing] in Carytown called “A Garden of Laughs,” which will be an open [mic] with two feature acts, and bingo with prizes. Folks can follow my page for more updates on this show. I would also like to do a mic [that’s] solely more sketch comedy in the future.

Rieka: I wouldn’t say bigger. I would just say that sometimes it can be hard to have a standup also do improv. Not that they’re not great at it, because they really are. But I think now it’s a perfect opportunity to have people who like improv, and who do improv, to be more seen. Especially people of color who are in the improv scene, which is what I want to get out there. So any opportunities to have them be on board is definitely wanted.

Gabe: What would you say are some of the differences between doing standup and doing improv? Like, advantages and disadvantages.

Rieka: I’ll speak on this briefly. Because I’ve taken one improv class. I’ve hosted a couple of things, and I’ve done improv, but there are people who could probably speak better on this. But what I will say is that I feel like standup is, like… some benefit is: you just lean on yourself. You determine what your set’s going to be. You go up there and you don’t have to rely on a team. And with sketch, and also with improv, it’s more of a team. And it’s like: leaning on people, relying on people, but you can also be a pro. I like the aspect of having a community, having a team of people come together and create really amazing comedy. Whether it’s improv or sketch. And you don’t really necessarily get that with standup.

Standup is more of a solo thing, but there’s still a community. I mean, we go to the open mics, we come together, we talk about stuff, we run through bits together and things like that. So, there’s definitely a community, but it’s not like a team of people coming together to do something. Unless you’re doing a podcast, or something very specific, with standups involved. I would say those are the main differences. I think another thing is that from either side, they’re always going to be like, “This is harder than this.” You never really know how challenging it is until you are on the other side. And as a person who’s done both, I would say they’re both equally as challenging, for completely different reasons.

Be on the lookout for Rieka Speaks on the live comedy circuit and on the interwebs. You can keep up with Rieka on Instagram at @riekaspeaks and find all local comedy shows (including Rieka’s) at @ComedyRVA on Instagram.