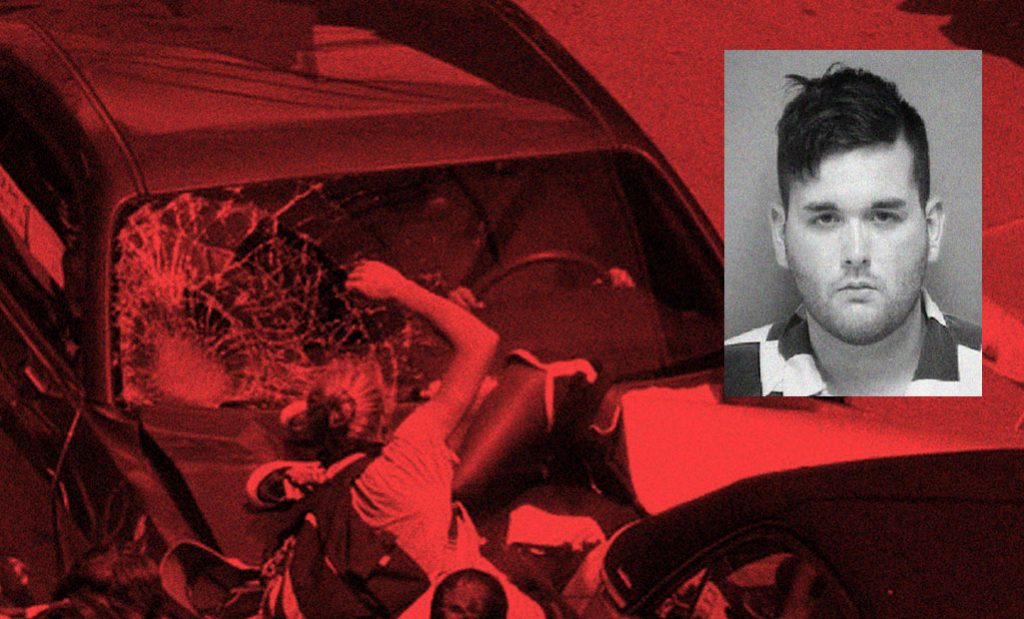 The disturbing photo of bodies flying as a Dodge Challenger hurtles into them, shot from behind, has become one of the defining images of the Charlottesville rally on August 12th. The driver of that car, James Fields, faced second-degree murder charges for the death of Heather Heyer, along with felony charges for assault, wounding, and hit-and-run.

But after Thursday’s short hearing, where new video captured by restaurant security cameras was first played, Fields faces an upgraded charge of first-degree murder. The video shows Fields drive toward the crowd, stop, and reverse, repositioning before speeding into the crowd with greater momentum. Other evidence included footage and audio from the helicopter of Virginia State Police Trooper-Pilot Berke Bates and Lt. Jay Cullen, who both died when their helicopter crashed later in the day.

District Judge Robert Downer ruled that probable cause had been demonstrated for a premeditated attack, leaving Fields facing the possibility of life in prison if found guilty.

RVA Magazine has covered Charlottesville since August 12th. Every story we’ve published on this has received at least one comment asserting that Fields was defending himself and was under assault. It’s a popular conspiracy theory on YouTube and in dark corners of the web, and this new development directly contradicts it.

Prosecutors directly address the notion of self-defense in their questions for Charlottesville Detective Steven Young, who acknowledged that there was no indication that anyone had attacked Fields or his car before the crash.

The self-defense claim wasn’t addressed by his court-appointed attorney, Denise Lunsford. Instead, she asked Young a series of questions about his demeanor and connections, portraying Fields as remorseful and without ties to the white nationalist groups he had marched with.

Although Young said Fields had no known ties to the hate group, he was described by a former teacher, Derek Weimer, as being fascinated by Adolf Hitler and the Nazis. Weimer also said he’d been known to the school administration for “deeply held, radical” views on race. Young said Fields apologized when police stopped him, and cried when he learned someone had died.

The number of victims was also updated at the trial. Authorities now report 36 people injured in the attack, many of them wheelchair-bound from their injuries. A trial date for Fields will be set on Monday at a grand jury hearing.