Protesters, Police, and Frenzy: A day at the KKK rally in Charlottesville - RVA Mag 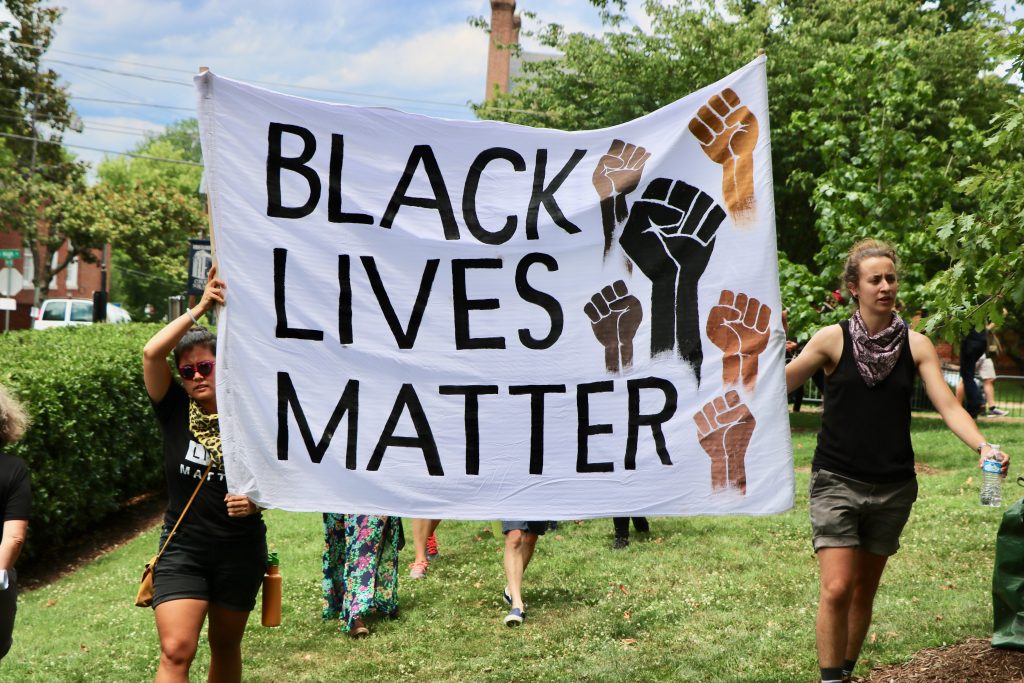 It seemed somewhat absurd–surreal, even–that an area amounting to .0006 of a square mile in a town of just over 45,000 people would cause such dissension and frenzy.

Yet here they were, the citizens of Charlottesville, VA, marching in circles around a 96-year-old statue waiting for the impending arrival of the most infamous white supremacy group in history, one which most believe had died around 1871. But that was nearly 150 years ago, and old habits have a way of peeking out from the gloom of extremist counter-culture.

By 2 p.m., almost 1,000 protesters had flocked to this tiny park with signs, banners, horns, whistles, drums, and a great deal of frustration. Colorful origami cranes hung from the trees and gold glitter had been poured onto the sidewalk surrounding the park, making everything sparkle.

Some protesters were community members who gathered with a list of demands for Mayor Singer, such as “Revoke the permit for the Aug. 12 ‘Unite the Right March’” and “Remove the Lee and Jackson statues, now.” Some were from Black Lives Matter, both the Charlottesville chapter and surrounding areas, while others were from Showing Up for Racial Justice (SURJ), Antifascists of the Seven Hills (ANTIFA), ACLU and the Charlottesville Clergy Collective. 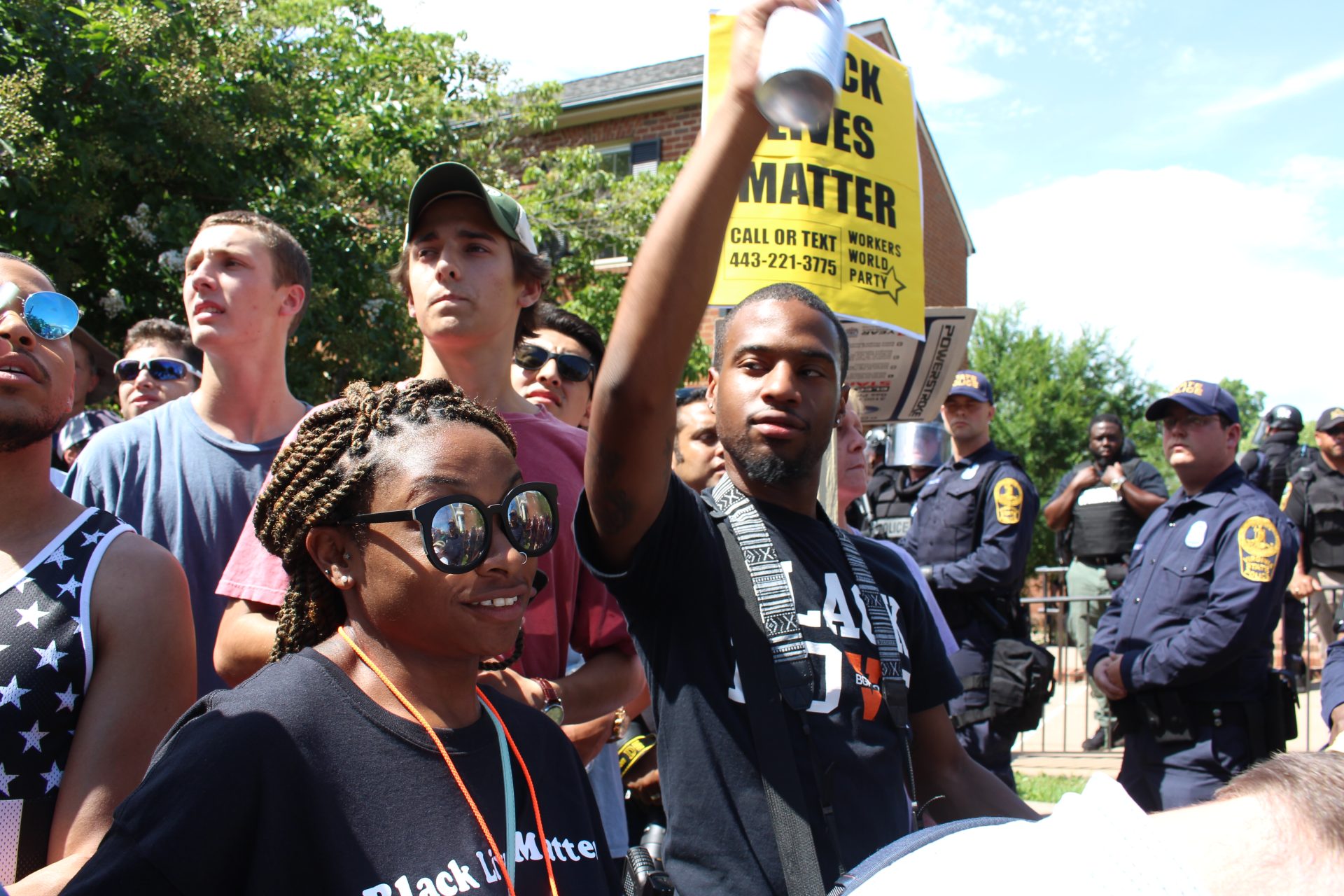 All were there to oppose the presence of The Loyal White Knights of the Ku Klux Klan of North Carolina, who traveled to the modest park in opposition of the removal of the Jackson and Lee monuments. The City of Charlottesville voted to remove these monuments this past April.

But the KKK had yet to arrive.

Others, however, sporting Harley Davidson attire were walking through the crowd and receiving some quick judgement by the protestors, some of which accused them of being KKK members. Rather, they were there to protest the use of citizen tax dollars in order to remove the statue.

“Next they’re going to take down Thomas Jefferson’s statue,” said one of these men, who preferred not to be identified. “It ain’t never gonna stop.”

A large number of police officers stood around the perimeter of the park, but limited their activities to crowd control. Verbal fights were constant, yet the arguments never became physical and police officers were always close by prepared for potential violence.

“[This event] is hard because of the numbers, and we’re using all the resources we have,” Charlottesville Police Sergeant Gibson said. “Hopefully, it all works out and remains peaceful.”

“I feel it’s important to show people are united against racism and hate,” Blackbird said, a member of ANTIFA who chose to use a pseudonym. “These people shouldn’t have a platform. While the Klan as a group is discredited and likely to have low numbers today, August 12th is ‘Unite the Right’ and they need to know we’re not going to take it.”

Many were incredulous that an event like this were to happen in 2017, but were hopeful the protest would remain peaceful while they exercised First Amendment rights.

“You can’t sit by when the Klan comes through your backyard,” said Nina Zinsser, a member of SURJ. “You can be peaceful, but voices can still be heard.”

Nearby, a group of protesters surrounded an older couple wearing Confederate flag caps and t-shirts, upset by their presence. The couple made no indication they were KKK affiliated, but disliked the vote removing the monuments.

“I’m here today to support and defend American history,” Brian Fisher said, a resident of West Virginia. “Was slavery wrong? Absolutely. Was the Confederacy wrong for seceding from the Union? I believe it could have been more thought out by the officials that were in charge in that day in time. But you know what? It’s past history, we can’t change it, but we can support the continuation of American history so it can continue to be taught in our schools to our future children so that they don’t repeat past mistakes.” 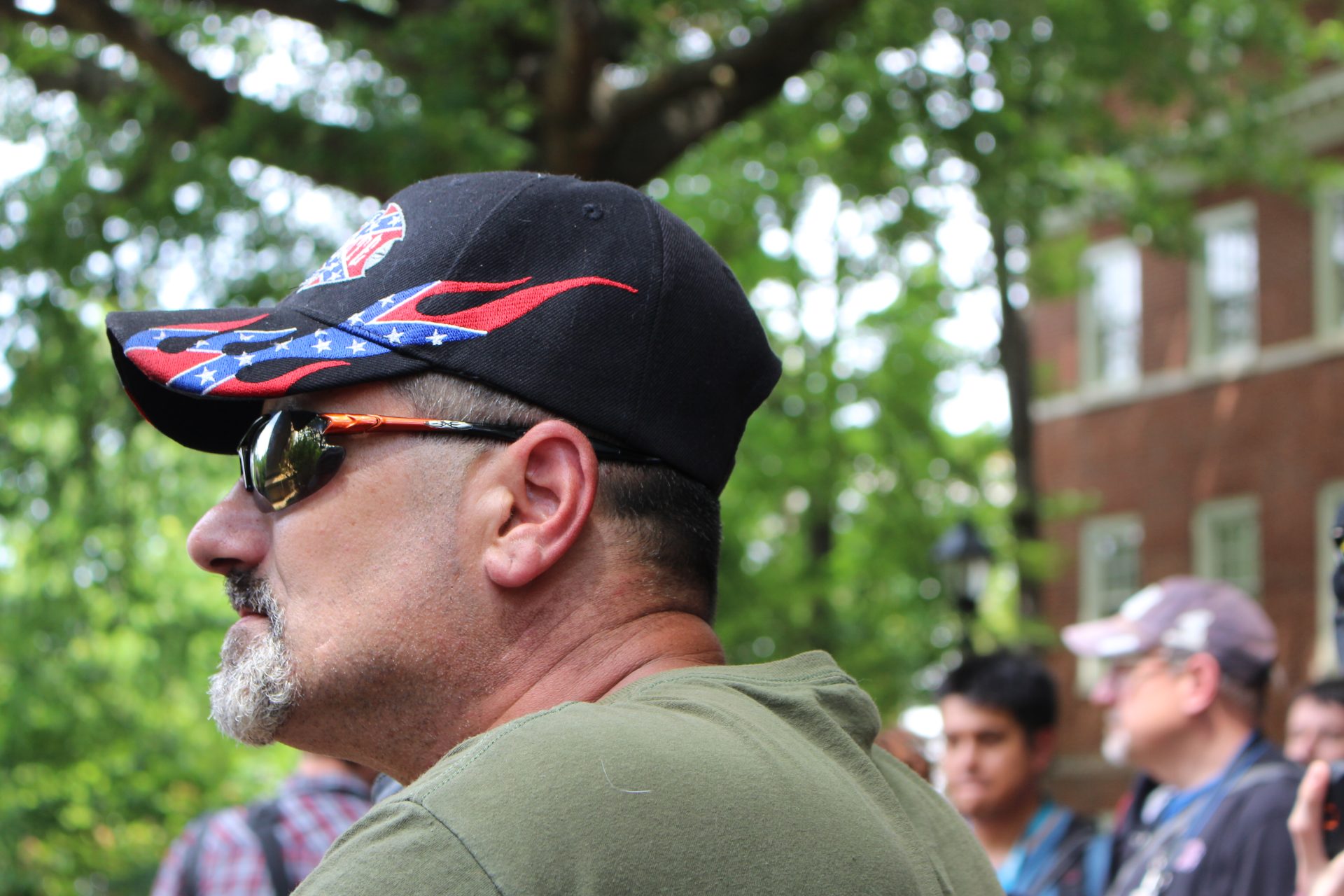 Even throughout his explanation, surrounding protesters heckled the couple while forming a semicircle of banners around them. Fisher remained quiet and calm, the lines in his face running deep.

One of the women who stood near this encounter was staunchly against the presence of the statue, as well as the appearance of the KKK.

“The statue represents the Confederacy, represents a negative history, so by taking it down it represents a change, and thinking about the people who see that statue and reminds them of people who thought they were less than human,” said Shay Sanders, an African American resident from Charlottesville.

The protesters continued to march in circles or have conversations to the sides of the park, but the humidity rose as anticipation increased, and a viscous anxiety seemed to loom above the park.

Suddenly, the crowd rushed to the street in front of Charlottesville Circuit Court, from which KKK members were anticipated to emerge. Although their permit was scheduled for 3 p.m., minutes passed with no sign of the group.

Police, however, were making extravagant preparations. 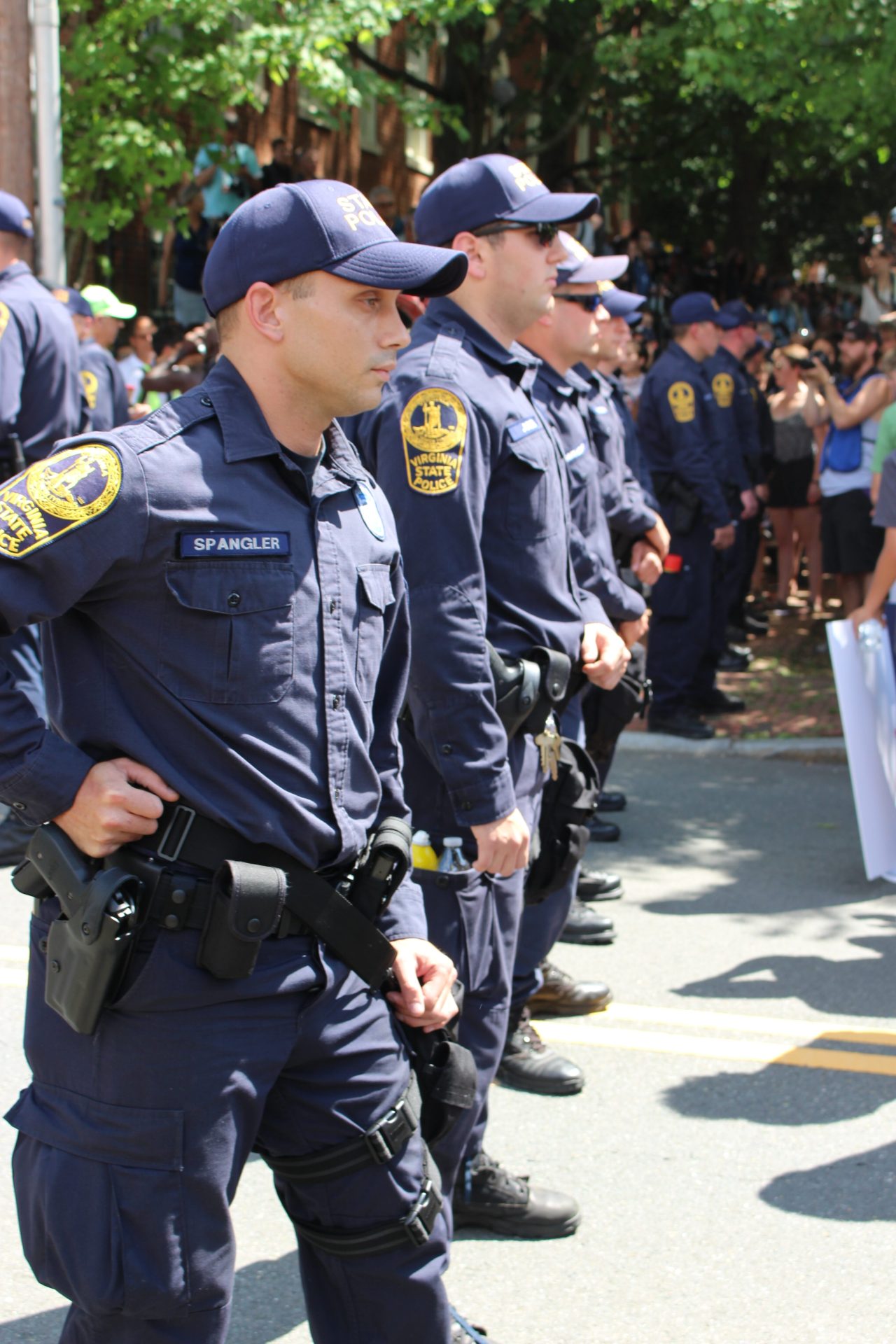 Two rows of Virginia State Police Officers wearing full riot gear, while carrying automatic rifles, made a path that led directly to a blocked-off section of Justice Park. People packed themselves into any space available outside this police pathway, chanting, “When black lives are under attack, what do we do? Stand up, fight back,” and enduring the heavy, oppressive heat of the Charlottesville afternoon.

Finally at 3:40 p.m., the KKK members made their way through the pathway created by the police, with an underwhelming number of members present. The permit, which the group submitted last month, included an estimate of 100 people; However, no more than 50 were present this Saturday.

“It means disorganization,” said David Straughn, a member of the Black Lives Matter Charlottesville chapter, who explained why he believes so few KKK members showed up. “I think it shows fear, that some members did not want to come for fear of being in their costumes and being screamed and yelled at…”

Straughn walked through the crowd shouting chants into a megaphone while KKK members waved their KKK and Confederate flags in front of the Jackson monument. While the KKK shouted phrases like, “White power,” the surrounding crowd created so much noise, the KKK chants were almost completely drowned out. 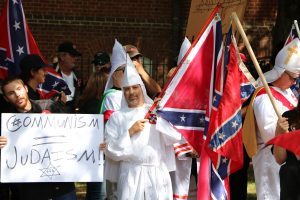 “The Klan being here does not represent the people of Charlottesville,” Straughn said. “All these people here did not want this to happen. That means a lot for people of color who have undergone trauma from experiences like this by the Klan, and who have had parents, who have had grandparents who have Klan-affiliated tragedy.”

At 4 p.m., the end of the KKK’s permit, the crowd began chanting phrases such as, “Time’s up, racists go home,” and “Cops and Klan go hand in hand.” Despite this, the group stayed for just under an hour and were escorted out the same way they processed in.

As evening approached, the protesters moved into the street and gathered outside the Albemarle County Sheriff’s Office. While KKK members tried to exit in their cars, the crowd remained in the street, hindering their ability to leave.

At 4:40 p.m., Deputy Chief Gary Pleasants declared the present assembly of people “unlawful” (VIDEO LINK) and warned “chemical agents” would be used on those who remained.

After protesters linked arms and formed a line on E High Street, police shot three canisters of tear gas into the crowd. The protesters immediately dispersed.

In all, twenty-three protesters were arrested after refusing to move and charged with misdemeanor offenses.

According to The Daily Progress, Jeff Fogel, a Charlottesville attorney who was observing Saturday’s events for the National Lawyers Guild, said riot police should not have remained in the area after the KKK had left, as the continuing presence of heavily armored police provoked the remaining protesters into a confrontation.

By the end of the day, the surrealism of the event had sunk in. A small group of non-local white supremacists had sent the town and state into a frenzy. Only few people remained in the park, some of which were clergy members from the Charlottesville Clergy Collective, offering prayer and open conversation.

When asked why the Clergy Collective decided to come that day, Rev. Dr. Heather Warren simply replied they were there to “spread love.” 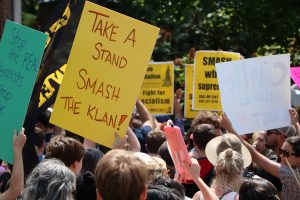 Yet all sides believed their presence in this park was the right one, with absolute passion and certainty. One side greatly outnumbered the other, however–a side that represented a progressive modern ideology, which may finally signal the end of these conical hat-wearing white supremacists–but the presence of free speech was clear.

There were more than just two groups of people in that little Charlottesville park on Saturday, and each of them was able to stand in it and protest whatever they wished.

And that would have made the writers of the First Amendment proud.