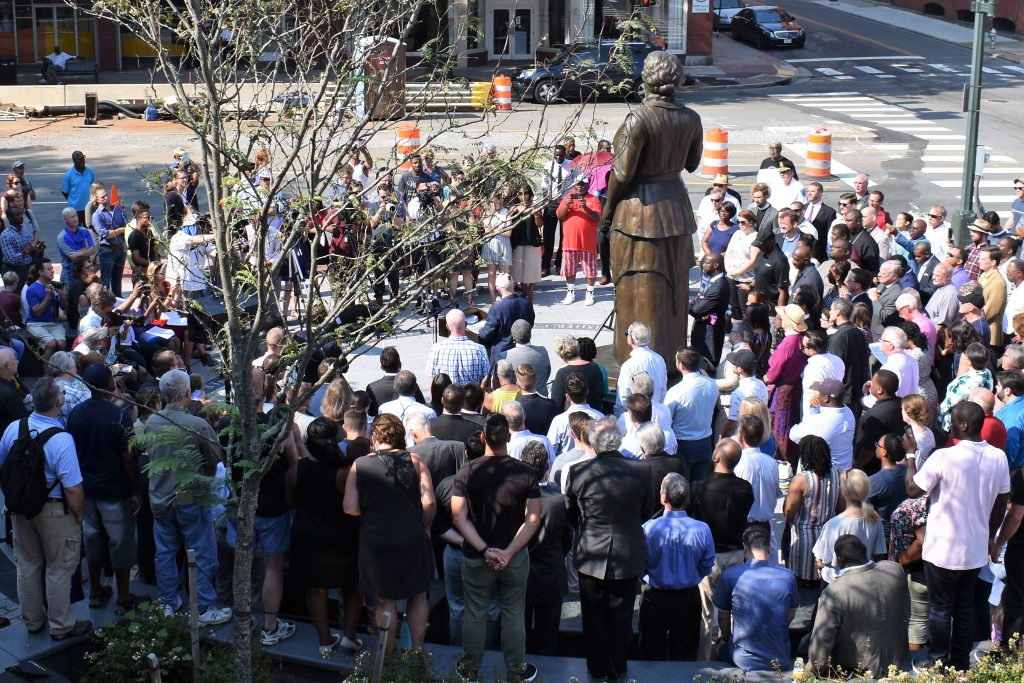 All photos by David Streever

Around 600 Richmond pastors signed a statement rejecting white supremacy this past weekend following the tragic events in Charlottesville at the Unite the Right rally, which left one person dead and 19 wounded. They announced the statement Monday morning at a press conference, gathered by the Maggie L Walker statue on Broad Street.

More than 100 signatories were in attendance. “The pastors gathered here today are committed to preach, teach, and advocate against the sins of racism and white supremacy,” said Minister David Bailey. Referencing Richmond’s former status as the capital of the confederacy, he called for a transformation, quoting local historian Dr. Ben Campbell. “We want to be known as the capital of reconciliation.”

Richmond was a key city in the slave trade, operating the second largest market after New Orleans. The legacy of slavery continued with a history of civil rights abuses, even into the 1970s. The NAACP filed more suits in Virginia, many of them in Richmond, than anywhere else in the US.

Bailey introduced Pastor Corey Widmer from Third Church and one of the signatories, who took up the theme of reconciliation. “This is a powerful statement of unity,” he said. “We want our commonwealth and our nation to know that we as a united church reject the ideology of white supremacy and anti-semitism in all its forms…This is very important for us today, especially those of us who are white, to own what we have failed to do in the past, and to humbly repent for that sin.”

After cheers and applause, Bailey returned to the podium. “Later this week, the organizers of this event will meet to determine concrete steps we can take together to address the legacy of racism in our city,” he said. As the executive director of Arrabon, a ministry that equips churches in anti-racist work, he is in a unique position to deliver on this promise.

After introducing the rest of the organizers, Bailey and Widmer invited the crowd to join hands and pray with them for reconciliation, repentance for past complicity in racism, and the resolve to work together in unity. The group will announce next steps on their website.