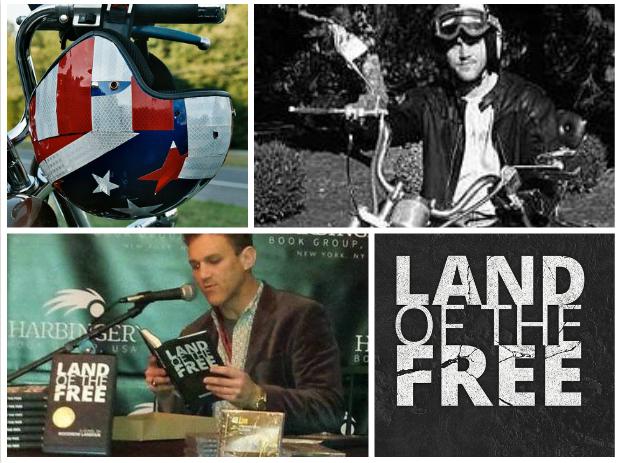 Some books are crafted by writers, and some are written by storytellers. Land Of The Free by Woodrow “Pack” Landfair (born in Richmond, Virginia) is a book written by a story, which is to say any attempt to unravel the various parallel and intertwining plot lines from one another, the factual from the fantastical, or the narrative from the narrator, is utterly futile.

Some books are crafted by writers, and some are written by storytellers. Land Of The Free by Woodrow “Pack” Landfair (born in Richmond, Virginia) is a book written by a story, which is to say any attempt to unravel the various parallel and intertwining plot lines from one another, the factual from the fantastical, or the narrative from the narrator, is utterly futile. This is a story that exists in the ether, where the real intermingles with the imagined; an exploration of a fractured personality in which confusion and clarity fluctuate with flash-flood spontaneity. It’s a novel that poses many questions, and provides few answers.

Land Of The Free is honest about being full of shit, and full of shit about being honest–but beautifully so. It chronicles an exploration of the fairy tales, lies, and outlaw romanticism upon which the American Dream is crafted. The pages vibrate with the engine noise of old motorcycles and freight trains. They spread out, scattered with shrapnel and the fallout of fleeting romances, piling themselves with cocaine, and burning off like the smoke of roadside bonfires. It is a shoddily built stage occupied by an honorable con man, orating in the voice of a hero on fire, selling legendary fabrications with a straight face, spinning fictions through drunken limousines and starving in cheap motels. Here is the story of a man who sold everything, bought a motorcycle, and rode away.

At times disjointed, and given to lyrical repetition, Land Of The Free toys with narrative the way the mind toys with memory, which endows the prose with a gritty grace – a certain gravel-strewn and wind-burnt authenticity. Landfair has written a work of relevance and social introspection with a persistently self-confessional voice, and the congruency of the search for Self and the search for Country paints a vaguely noir sketch of the contemporary American psyche.

As the story winds its way across America, traversing the Mississippi, wandering the flood-wrecked ghettoes of a post-Katrina New Orleans, limping through farmlands and homeless shelters, jail cells and circus tents, it develops an arrhythmic pattern of microscopic focus, capturing brief moments and painting ephemeral portraits before leaping, cinematically, in streams of consciousness, to the next vignette.

This is not a well-rounded portrait of America. This is not a description of the actualization of a dream. It is a dream itself – drifting, lost, discovered, and lost again. It wakes with a start, and drifts off just the same. Constructed in a ramshackle association of moments salient and distorted, the story moves in peculiar frames at weird angles. There is a certain restless discomfort inherent in this assembly of experiences and desperate contemplations, a perturbing uncertainty in the unsteadiness of the narrative.

Much like the subject matter, the book is at times palpably unenjoyable, and perhaps that’s the point. There is no anecdotal exactness, no sequential ribbon to tie neatly a grand narrative around the chaos of calamities and triumphs and wonder that comprise the work. A reader aching for a fictive neatness, who needs his feet to touch the bottom of an undulating current, will not enjoy Land Of The Free. However, those predisposed towards motorcycles and abandoned security, suspicious of authority, comfortable with the open-endedness of existence, and flexible with the notion of truth owe this book a shot.

Landfair will be appearing on the CBS morning show in Richmond on June 9th, and doing an early signing at Barnes and Noble that afternoon. Land Of The Free is set for national release the following day from Harbinger Books.