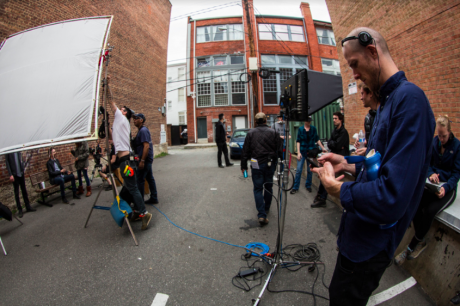 While walking through Petersburg, Virginia in the springtime, it’s not uncommon to see constructed sets or altered buildings. AMC’s “TURN: Washington’s Spies” is wrapping up production of its fourth and final season, but it is just one of many film projects in Virginia’s growing industry.

“TURN” actor Samuel Roukin has also been directing his film, Demus, here in Richmond. He consulted the Virginia Film Office for the project. The science fiction film was co-written by Roukin and he also plays a role in it. 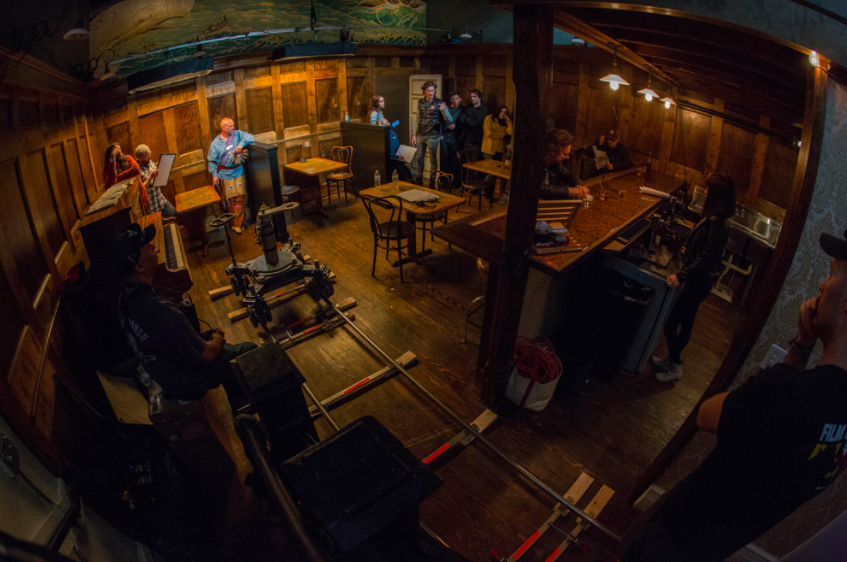 Roukin said the plot stemmed from the social phenomena of how people can walk into a bar and tell a stranger their troubles or darkest thoughts more easily than they can tell the people they love most. Enter the eponymous main character, who has the ability to extract negative energy from people in the gritty post-world war three setting.

“Once the script was written and I knew that I wanted to do it in Richmond, I gave the script to Andy Edmunds to read… then we began location scouting,” Roukin said. “If there’s somewhere worth filming in Richmond, [Edmunds and co} know who to talk to about it.”

Andy Edmunds is the director of the Virginia Film Office, and perhaps the state’s biggest fan.

“It is my pleasure to wake up every day and convince people to come to Virginia to make television shows, movies, commercials and anything that requires a location pallet,” Edmunds said. “We certainly have a great pallet here in Virginia because of the diverse topography and architecture. It really is America in miniature. You can pretty much shoot anything in Virginia.”

The film office helps with a number of special, localized issues, among those is scouting filming locations.

“It’s great when a show comes and especially when they stay for many years,” Edmunds said. “You create these relationships and these friendships that will last far beyond the film production.”

While the overall state of Virginia has diverse landscapes, its capital city, Richmond, has diverse architecture that has helped launch it to the forefront (or background) for some flicks. Demus, which is set in a near future, yet post-apocalyptic world relied on the unique aesthetics that Richmond has to offer.

Roukin gravitated towards the derelict buildings found on Belle Isle and the contrast of a futuristic setting with the old-time charm of Main Street Station.

“[Richmond] is very beautiful, but also there’s a fair amount of dereliction as well, which is really underrated in a city,” Roukin said.

But Turn and Demus are far from the only films which have highlighted the area’s colonial or post-colonial architecture, films like Lincoln and Loving as well as shows like Mercy Street on PBS have all sought the region to fit their period movies.

Though Lincoln was a big budget Spielberg project, Edmunds claims that independent films and series television are the primary targets the office attracts.

“In series television it’s like a content manufacturing operation,” Edmund said. “They come year after year There are a lot of local crew members and talent, and it’s a way to have ongoing jobs.”

According to 2015 data from the office, the production of TURN had a $175 million impact. AMC also aired a tourism advertisement during the show’s broadcast. This co-branding creates a unique chance to further spotlight the Commonwealth beyond it’s on-screen role.

“Part of our arrangement and our incentive package is that they will create a commercial for tourism and include a broadcast of that commercial during the show,” Edmunds explained.

He cites a growing interest for people to visit filming locations, such as the spike in New Zealand tourism related to the Lord of the Rings franchise. He is proud of the Film Office tapping into that stream of tourism here in the state.

It isn’t just the film office that strives to grow the industry in the state though.

Throughout her career, Waters has spent time in more film-dominated cities like Los Angeles and Atlanta. When she moved to Richmond, she recognized the potential and the streets that bustles with creative, industrious possible-employees.

“It was really just seeing a need that we had here, and having a desire to grow Richmond into what I feel it can be,” Waters said.

Since its inception, RIFF has expanded its venue locations and included musical acts as well. The goal is to attract international filmmakers who may be interested in filming in Virginia, but there’s economic impact as well. The festival draws in some tourism, bolstering local businesses, from stores to restaurants and hotels.

Though the festival begins in late February, Waters plans to hold the 2018 festival at a later starting date in order for the warmer weather to open more outdoor venues for the musical acts.

“It’s not just about the film festival and the music festival,” Waters said. “It’s also about our local businesses and the development of that.”

Emmy award-winning documentary and motion picture filmmaker Jesse Vaughn’s film The Last Punch was screened during the 2017 festival. The movie tells the story of Muhammad Ali’s final fight and the Atlanta-based hustler turned boxing promoter who made it happen.

“The Last Punch” Trailer from Mad Box on Vimeo.

Though The Last Punch premiered at RIFF, it was actually filmed in Georgia. However, Vaughn is eager to bring a future project into Virginia.

Another big-time boon for film making across the country is the tax incentives states can make available. And as states like Georgia, which have seen rapid growth of film in connection to larger tax cuts, are unsure how to weight those impacts, leaving the door open for the Commonwealth to get ahead of the fray.

And in the mean time, competition is stiff; New York, California and GA offer up to 30 percent rebate while Virginia only offers 15 to 20 percent.

“We have been able to move the boulder up the hill little by little over the years,” Edmunds explained.

In 2010, legislation was introduced through the Virginia General Assembly that established the Motion Picture Tax Credit, which is a refundable income tax credit for film productions in the state. In recent years, the credit cap off has grown.

Edmunds explained that at one point the Film Office had a $200,000 grant pool to work with, but after high profile projects like Steven Spielberg’s “Lincoln,” and AMC’s “TURN: Washington’s Spies,” the office was able to bump the funds upward. And all of that still pales in comparison to GA’s $200 million a year,

But Edmunds is optimistic, He believes there will be another push to increase funds in the next legislative session. Until then, we’ll see you at the movies.

Top image via via Dennis Williford 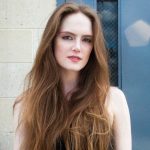