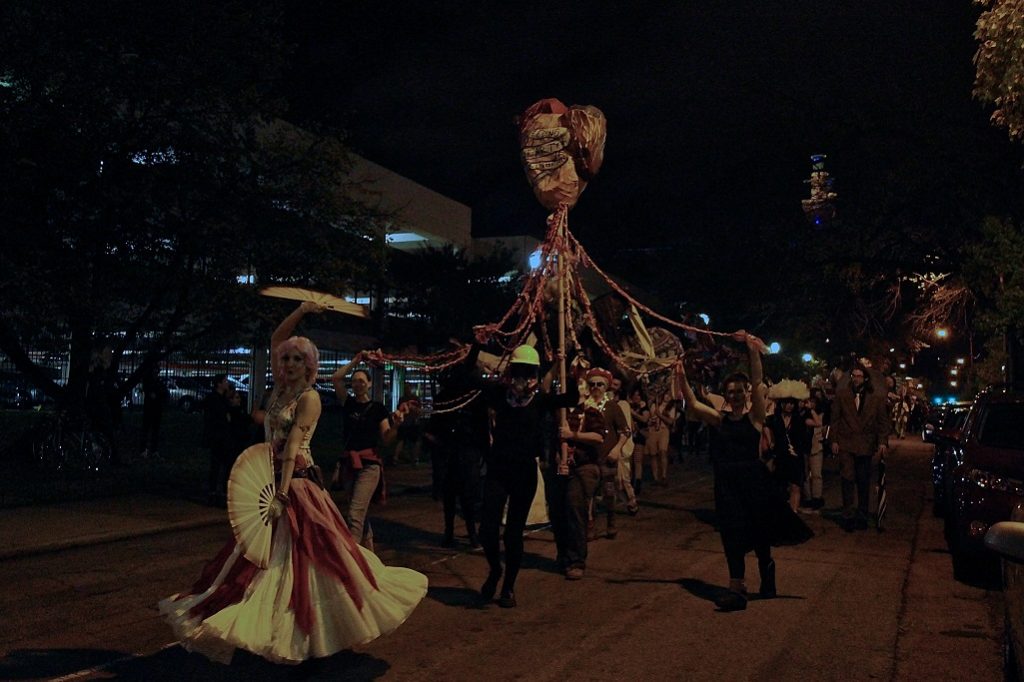 All The Saints Theater Company’s annual Halloween Parade returned to Richmond’s streets for its 14th edition last night — presenting a climate change-inspired “Funeral March For Life As We Had Wished It.”

The Oregon Hill Halloween Parade has risen from the ashes after an announcement last year that the 2018 parade would be the last. All the Saints Theater Company and hundreds of participants gathered in Monroe Park on Thursday night and made their return to South Laurel Street for the 14th annual edition of this Richmond tradition.

The parade is a funeral march with a new theme each year, featuring enormous, macabre puppets made by All the Saints Theater Co. It’s the brainchild of leader and organizer Lily Lamberta, who is the founder, producer, and lead puppeteer at All the Saints. It’s become a ritual for the community in the past 14 years, and the overwhelming response Lamberta received after announcing her plans to put the parade on hold is ultimately what revived it this year.

“We make art because it’s our way to tell the story of our times. We make Art because it’s necessary,” said Lamberta. “The community’s support for the parade is why I changed my mind.”

This Halloween was a “Funeral March For Life As We Had Wished It,” inspired by the climate crisis, the burning Amazon Rainforest, and human rights crises affecting immigrants, indigenous peoples, people of color, and the LGBTQ community. Oya, an Orisha Black Elemental Goddess reference, along with Climate activist Greta Thunberg and a personification of the Amazon Rainforest were just some of the many larger-than-life puppets that towered over the marchers.

Lamberta announced before the 13th annual parade in 2018 that she needed to take a break to focus on her family and her art career, wanting to pursue more installation work. “A group of people began to organize the same day of the announcement to figure out how to support me more this year,” said Lamberta. “We call them the All the Saints Inner Council.”

“Between this immediate response to my truthful unknowing whether it was feasible for me to continue the Halloween Parade after 13 years, and the dire world conditions in the past year, I felt it necessary for me to continue to use my work as a political activist, organizer, puppeteer, and storyteller to do what I do,” said Lamberta. “And what I do is bring the magic of ancient pageant-style puppetry into the streets of Oregon Hill, to celebrate community and fight for a better means for our world and the inhabitants of our world.”

Lamberta no longer has a plan for when the final Halloween Parade will be. She’s now going to play it by ear and decide annually if she’ll be able to make it happen or not. Her words of wisdom for the people of Richmond? “Seize the day and take nothing for granted. See you in the streets.”

Here were some of the scenes from the streets last night: