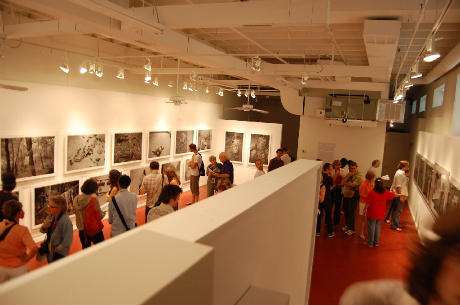 LOOK (away): Priceless Violence and the LOOK3 Festival of the Photograph

We arrive with the rain.  The clouds are lowering themselves onto the mountains that crowd I-64 and shaking fat drops onto the quickly fogging windshield.  By the time we park in downtown Charlottesville, words like monsoon, torrential and hurricane are being tossed around the car in agitated tones.

We arrive with the rain.  The clouds are lowering themselves onto the mountains that crowd I-64 and shaking fat drops onto the quickly fogging windshield.  By the time we park in downtown Charlottesville, words like monsoon, torrential and hurricane are being tossed around the car in agitated tones.  The AC is broken, the windows are white, and we’re making finger drawings in the accumulated moisture.  The LOOK3 Festival of the Photograph is somewhere outside in this mess, under a banner sagging with water and whipping violently in the wind, and nobody is ready to get out of the car.  Well, fuck. Someone take a picture.

The rain slows slightly.  I grab the Field Day of The Past newspaper I had picked up at a Podunk gas station that sold fried chicken and cornbread. I wanted to read about the tractor pull, but don’t have an umbrella.  “Well, this should be fun,” I mutter as I jump out into the storm.

We make our way towards the Paramount Theater for our press passes and to watch a talk with photographer, Gilles Peress.  Everything goes smoothly, and we stride into theater, only half an hour late which would be right on time in Richmond.  We enter the upper tier of a packed auditorium and find what appear to be the last three empty seats in a row.  As we sit down, the famous photographer is taking questions from the audience.  A man concealed by the density with which the theater is populated proudly explains his avid support of the festival over the last three years, and announces that the talk he just watched (and we just missed) was best he’d ever seen.  Fail.

Peress is sitting with a coffee cup in a corner of the stage.  His images of death and decomposition are being projected on the screen behind him and his interviewer, and he is chuckling, joking in a heavy accent.  The photographs are strangely peaceful, a touch of morbid serenity. They are the aftermath of terrible humanity, but images of something that can’t be affected anymore by all the heinous violence and senselessness of this planet.  They impart a tranquil acceptance of inevitability, assuring the mangled bodies that the bad parts are over.  Don’t worry, everything’s ok now, everything’s fine.

He tells a joke about photography as his shot of a pair of boots with leg bones sticking out of them flashes across the screen.

And then it’s over.  The audience gives a standing ovation, Peress smiles, stands and waves.  We stay seated.  I can’t stand in awe of something I didn’t see.  We look over the festival program we were given with the press passes.  Nothing is happening until 9pm, and it’s not yet 5, so we decide to hit up some of the exhibits.

We come out of the Paramount to find that the rain has stopped. Crowds of photographers are snapping pictures of each other, lighting cigarettes and turning their phones back on.

TREES is an exhibit without a gallery, this year featuring the nature photography of Thomas D. Mangelsen suspended from the branches of the trees that are clustered together down the middle of the Charlottesville pedestrian mall.

Mangelsen is damn famous. His photographs are likely what you think of when someone says “National Geographic.”  The bear in a river with a fish jumping into its mouth, that’s his.  His pictures are of speeding gorillas, predatory felines, and animals I can’t name.  They look good presented like this, but I can’t help but wonder what effect on ambiance a public exhibit of urban photography would have had on the upscale shopping and entertainment district of Charlottesville.  Or better yet, Gilles Peress’s portraits of death, hanging over the fenced-in outdoor dining sections that stretch between the trees, bound wrists and rotting flesh as an accompaniment to goat cheese salad.

Across the plaza is the World Press Photo 09 exhibit.  As we walk in, the middle-aged man at the door is gesturing at the walls, talking excitedly.  “Priceless works of art! Every one of them!” I hear him say as I shuffle past his errant arms.

The exhibit is huge, and comes on softly enough with images of the last Olympics and little kids smoking cigarettes in dirty apartments.  I should have stopped there, turned around and left.

The eyes get harder. Riot squads are trampling a mother carrying a naked toddler. Guns are propped in cars with dark windows. Soldiers are throwing bodies into ditches and the oblivion of history. Blood is everywhere, in the eyes of crushing skulls and the wrinkled hands of grieving old women.  Cops are creeping through ransacked living rooms.  A couple is cooking dinner al-fresco in the kitchen of a house that has been utterly destroyed by God or war.  A grown man in Georgia holds the body of his brother as an apartment burns behind him, weeping. Rubble is all around.  Somewhere somebody is winning a race. Here, people are winning awards.

“Now I know why governments kill you bastards.” I say to Ken Howard, the photographer I came with, as he stands between a 12-year-old homosexual prostitute in a thong, and more carnage.
I have to get out.

“Amazing work.” I say to the man at the door as I leave. He tries to tell me a story about a series focusing on a single mother of three children, one of which is not autistic.  “You can just really feel what she’s going through.” He says.  I glance furtively at the photographs…he’s not wrong.  I nod my head and leave.

It feels better to be outside. The dispersing throngs of festival-goers meandering around from gallery to gallery give a sense of exaltation that had been deprived by the World Press Photo exhibit.  And this is where I get mad at Richmond.

Why Charlottesville for an international photography festival, minutes away from nowhere, homogenous, white, sterile and collegiate, when we have not only the nationally high-ranking VCU Art School, but a diverse, increasingly exuberant arts culture, willing and waiting to attain prestige? Is this an issue of luxury? Of C-ville loyalty amongst wealthy philanthropists? Are we ruled out on the basis of our urban landscape?  If so, there is certainly no historical precedent in the arts.

Maybe the World Press Photo show has made me bitter, distrustful as to the nature of potential, purpose of beauty, purpose in general.  I stand outside a while, watching the fog pull it’s scarves from the neck of a mountain, dusk falling like the afternoon rain.

We start to discuss leaving, eager to retreat to the familiar solace of Richmond barrooms on a Saturday night.  But there are two things I need to see before we go.  The first is the Gilles Peress exhibit.

You enter a white warehouse through black felt curtains. A nice woman in a LOOK3 shirt tells you it starts at the back and progresses around the room.  You squeeze between the crowd to read the artist’s statement. The show is called “Natures Mortes”, French for “Still Life”.  The paragraphs explain the photography of death in terms of cannibalism, relating the work to Joseph Conrad, discussing the consumption of The Other.  You read the whole thing.  Everyone does.  The black and white photographs move like the slideshow at the artist talk, your legs carry you from image to image like some awful dream you can’t stop navigating. And for reasons you can’t explain, you don’t want it to end.  They are pictures of holocaust, butchered lives, dead roadside cattle and their horrible dicks.  Young men sleeping in eternity and pools of grayscale, breathless, tranquil, at peace.  There is no violence here, no bullets levitating in the frozen air of film. These are the last scenes of a movie you will never see. This is the story of your people, what you missed while clutching designs of immortality, what has hovered behind you while you joked of your profession before your admirers.  You can feel a camera shaking in your hands. You leave the gallery.

We head towards the Sylvia Plachy exhibit, which we had passed in the rain when we arrived.  I look around, hoping but not expecting to see her in a corner, talking through her Hungarian accent about photographing Tom Waits while he danced through her shutter.  Perhaps I could introduce myself, and pick up where our phone interview had left off on some highway exit in North Carolina.  But she’s not here, and my capacity to inhale more art is at its limits.  I don’t have to bring this up to Ken, who is slipping close to the door, looking tired and a little antsy.

I get dropped off at Curbside to meet up with some friends.  They ask me how the day was and I spend a while staring into my Screwdriver.  “Good.” I finally manage. “It really was amazing.  Priceless works of art.  Every one of them.”