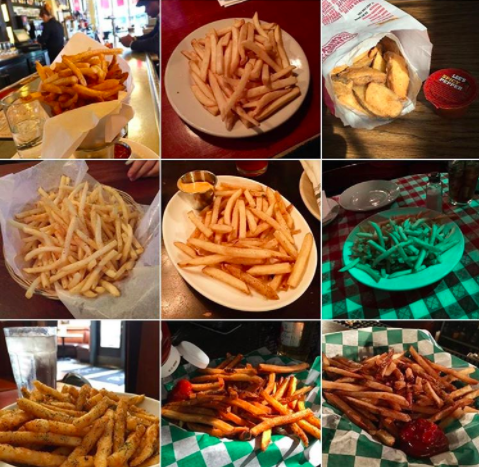 As the fate of the free world hangs in the tiny hands of President Elect Donald Trump, there’s one thing we can still count on in this great country – French Fries.

As the fate of the free world hangs in the tiny hands of President Elect Donald Trump, there’s one thing we can still count on in this great country – French Fries.

And one local man, we’ll call him Ben as he asked to remain anonymous to help add to the mystic, is aiming to create a kind of visual archive of the tasty fried spuds from Richmond’s fine (or less-than-fine) dining restaurants.

And from that brilliant, simple idea, frenchfriesofrichmond was born.

Ben moved to RVA to be a baker back in 2013 – things kind of got away from him and before long he spent a year and a half traveling through India and Nepal. While the spiritual journey may or may not be directly connected to his love of fries, he did make the life choice to become vegan on October 1st of this year.

That food-decision left few options for the fan of plated meals; few options except of course french fries.

“I’ve been inspired by any number of other simple things,” he said about the project. “I noticed I just started eating a lot of french fries for no other reason then they’re great and they’e vegan. And so I was going around eating all these french fries, and some pictures [on the account] I already had to send to friends for random reasons, and so I said ‘Oh, I should just start an instagram page.”

Now, with only a little more than a month under its belt, the account has 12 pictures of fries from such locations as Lee’s Fried Chicken, Tarrant’s Cafe and (my personal favorite fry spot) Pearly’s.

A photo posted by French Fries of Richmond, VA (@frenchfriesofrichmond) on Nov 1, 2016 at 1:12pm PDT

“Pictures tell a lot,” he said, after agreeing to my praise of Pearly’s. “French fries are like pizza where they’re all good, except the great ones are great. One out of 10 are worth special mention, and the rest or just french fries but they’re still really good.”

While the account is still small, we here at RVAMag thing the project is great – lord knows we have a competitive enough food scene here that maybe picking at a specific and causal item like fries will help inspire those with lesser products to step up their game.

Ben agreed – but he’s just in it for the limited food options and the lols.

“The dream is someone would accidentally find the site 10 years from now and see hundreds and hundreds of french fries pictures,” he said laughing at the idea.

But that sounds (and tastes) good to us. Keep up with Ben over at frenchfriesofrichmond.