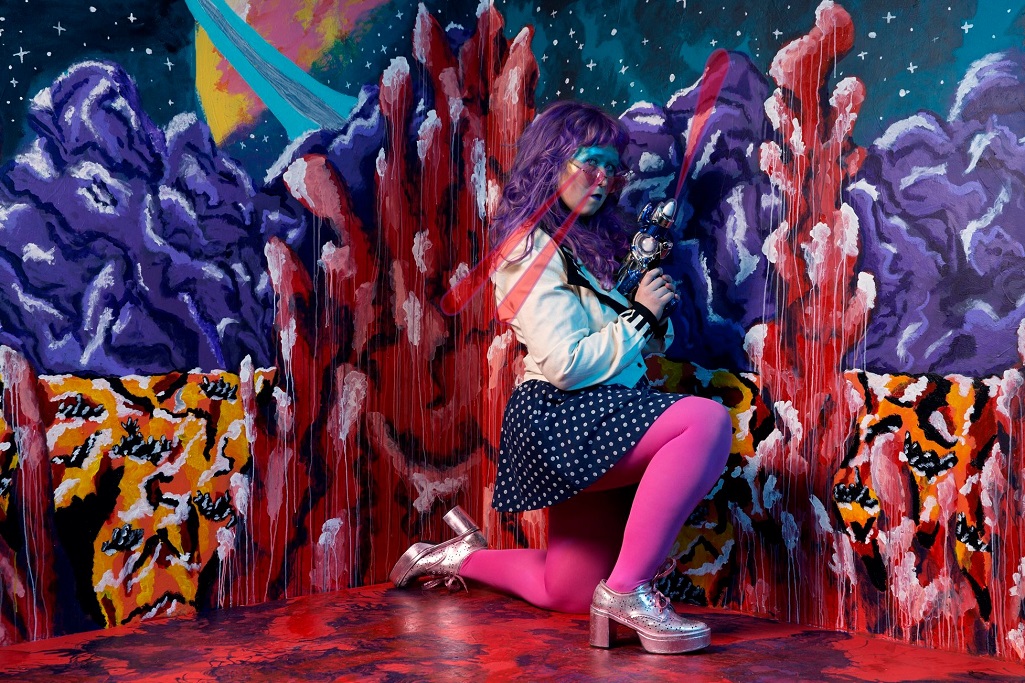 Photographer Maggie Ellmore’s arresting color schemes and fantastical imagery are both otherworldly in effect and deeply rooted in her local community.

Maggie Ellmore’s photos are some of the most colorful and impressive pieces of art I have ever seen. She draws inspiration from cinema, art history, and music to create beautiful sets and whimsical photographs that transport you to another world.

Her website describes her work as something that “makes you feel as if you’ve transcended into a new reality in between the familiar and the unconventional,” and I couldn’t have said it better myself.

After starting photography in middle school and maintaining it through high school, Ellmore decided she wanted to do it for a living and go to school for commercial photography. “The past few years, I have been going to school at Appalachian State University,” she said. “Last summer, I did an independent study for five weeks, where I did about 10 or 11 shoots working with a set that I modified.”

Ellmore hand-paints her own sets and does almost everything herself, to make sure the shoot is as cohesive as possible. She also uses common objects and similar items to accessorize the shoot. “From styling to wardrobe, makeup, the sets, the photography, the editing, I do it all,” she said. “I felt that it was important to do that in order to solidify a unique look.”

The sets can take a while to paint, but Ellmore said she can usually turn around a photo in a week or two. “Sometimes I can sit on an idea and wait to work on it for months or years in order to get the timing right,” she said. “But from idea to final photo, it’s usually a few weeks.”

Her unique aesthetic draws on inspiration from photographers David LaChappelle and Miles Aldridge, as well as David Bowie. “I think that music pushes the narrative,” Ellmore said. “They all inspired me to convey what I want in a way that hasn’t been done before.”

Ellmore’s shoots really do make you feel as if you have entered another, more colorful, world. Her 2018 “Eyeris” shoot was a final project in one of her classes, and was shot in Roanoke, Virginia.

“I reached out and went around to local businesses to shoot,” she said. “I also have friends who have houses that haven’t been touched since the 70s.” The clothes in that shoot were mostly thrifted, and Ellmore modified them to include the eye elements, she said.

As a local artist, Ellmore finds her work to be rewarding. “I work in such a unique niche that I have been lucky enough to work with some amazing people and businesses who want to actually work with me and trust my creativity,” she said.

She also tries to collaborate with other local artists because she “feels there is value in learning from other mediums,” and applies it to her work as much as she can.

Even quarantine can’t stop her from working and photographing. “Right now, I am working on a self-portrait series,” she said. “I have a six-foot by six-foot set in my garage, and I have been working on detailed production and slowing things down a little bit.”

All photos by Maggie Ellmore

After spending over a year in the virtual world, RVA Fashion Week was eager to return to IRL for their Fall 2021 event, and they did so in... READ MORE

Two things that shouldn't be in the same picture - giant jets ripping across the skies and beautiful gils soaking up the sun in their... READ MORE