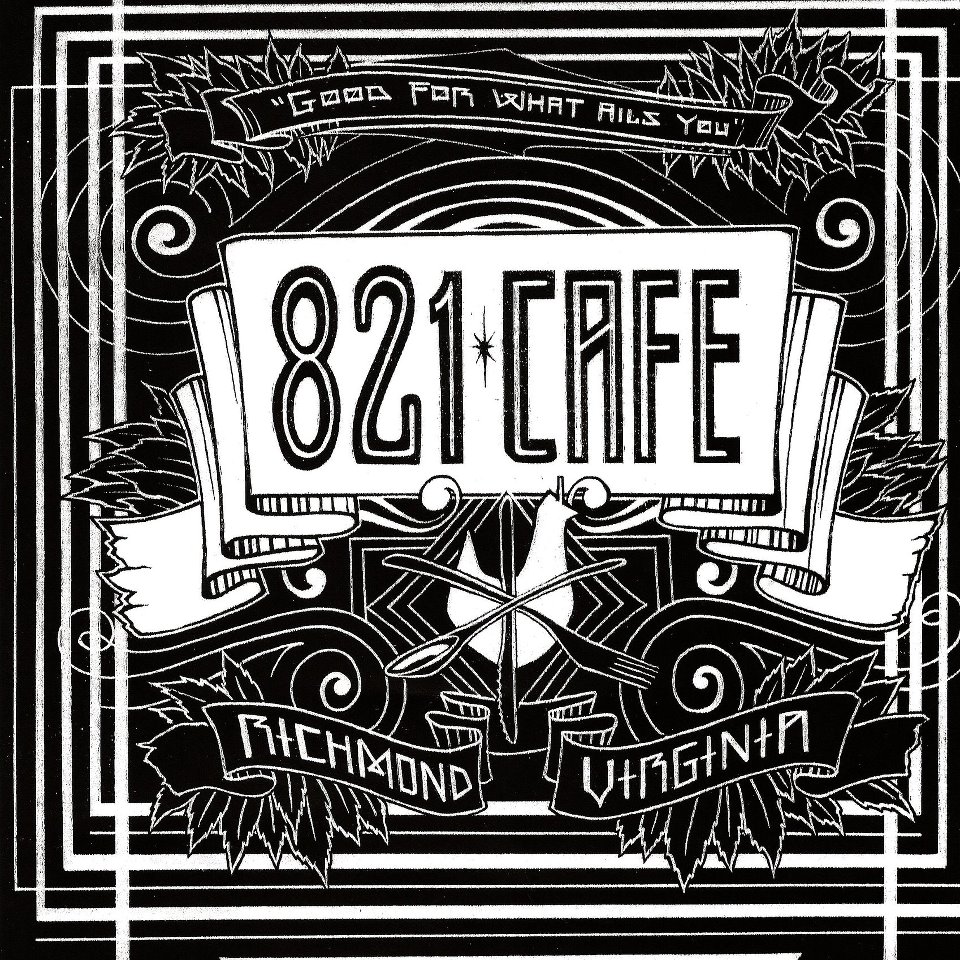 Richmond’s beloved 821 Café is turning 10! The diner, along with several other neighboring shops, will celebrate by throwing a party this week, complete with their usual menu and a customized beer.

Richmond’s beloved 821 Café is turning 10! The diner, along with several other neighboring shops, will celebrate by throwing a party this week, complete with their usual menu and a customized beer.

Originally located on 821 W. Cary St. (hence their name), this vegetarian and vegan friendly American diner, now a couple doors down at 825 W. Cary, is rated a whopping four stars on Yelp and 91 percent on Urbanspoon, and I can personally attest that their breakfast is absolutely fabulous (their breakfast sandwiches… yum).

Andrew Clarke, a co-owner of the restaurant, said he’s not only excited for the restaurant, but for the entire neighborhood as well. “Besides making it 10 years, we’re really excited because it’s also Salvation Tattoo’s ten year anniversary and our two businesses have always been like family. We’re all really close so it’s gonna be cool to celebrate together. Ours is in May and theirs is in August,” said Clarke, adding that they’ve “gone from that block being nothing to having a Sweet Frog and four restaurants on it.”

Clarke and his partner are the third owners of the restaurant, and have owned it longer than the other groups. Clarke mentioned that the move from 821 to 825 W. Cary was the biggest transition. “When we got the restaurant it was kind of doing its own thing, but I don’t know if you remember the old place. It was kind of dark and small, and the building was real jacked up,” he said. “[Moving] wasn’t on our radar at all, but the building came available, and it took about two years just to get in there because it’s been empty since the 70s. But it was just cool, because it gave us an opportunity to make 821 into what we wanted it to be, and still keep some aspects the same; the things people liked in ’95 when it opened.”

At their 10th anniversary party, the restaurant, in collaboration with Salvation Tattoo and Strangeways Brewing, will serve a one-of-a-kind, barrel aged triple IPA, conditioned on mangos, limes, tangerines, and mandarin oranges. This beer won’t officially be out until the summer and doesn’t even have a name yet, so grab this opportunity to be a true beer hipster; kegs and casks will start pouring in the early afternoon.

“The idea for the party and the beer collaboration came from us and the guys from the tattoo shop hanging out most nights of the week. There’s just a really good family vibe going on with us, and we’ve been neighbors for so long,” said Clarke. This beer will be vegan friendly, and will be an option among other regulars in the place including Bells and Breckenridge. Something I was particularly excited to hear was that they will be serving something called Dinosmores, a stout with marshmallows, graham crackers, and vanilla beans.

Some of these beers will come with special pairings by the kitchen manager, Kate, who plans on doing small breakfast pairings to go with the beers. She does breakfast for dinner on Tuesdays anyway, but Clarke says that this time there will be “some different foods off the menu.”

Overall, 821 just wants to thank everyone and have fun.

“We just wanna do something for all the people who have made this work for ten years for us… We don’t want it to be about us making money. We want it to be about getting people [at 821] and having fun and saying thank you,” said Clarke, adding that they “get all kinds of people, [which is what] makes 821 so good. We get people who went to the Landmark, we get students, we get people who live in Oregon Hill, young families; we get it all.”

As for the restaurant, Clarke is happy with where it is now, but is working towards a few changes and looking into starting another restaurant. “Right now we are working on getting some outdoor dining, and we are scouring the city and talking to some other people about a second place. It probably wouldn’t be an 821, but that’s something that’s really high on our list right now,” he said.

821 Café will be having their 10 Year Anniversary Party on Tuesday April 22. 821 Café is located on the corner of Cary and Cherry Streets, on 825 W. Cary St.