After years of work and much anticipation, the Virginia Capital Trail makes its official debut this weekend - RVA Mag

An idea that formed decades ago, and a project that has been under construction for the last 10 years, the Virginia Capital Trail will finally be open to runners, cyclists, walkers and the like in its

An idea that formed decades ago, and a project that has been under construction for the last 10 years, the Virginia Capital Trail will finally be open to runners, cyclists, walkers and the like in its entirety this weekend.

The over 52 mile trail that connects Richmond to Williamsburg along Route 5, or New Market Road, is a 8-10 feet wide, paved, relatively flat trail that was built as a sustainable means of transportation for people to get around as an alternative to riding on the roads, and to connect all of the counties in between.

During a two hour bus ride along the route this week to check out the trail, RVA Mag had a chance to see all the work that has been put into it over the years and check out four stops along the way to get a glimpse of what the different parts of the trail look like ahead of tonight’s ribbon cutting ceremony. 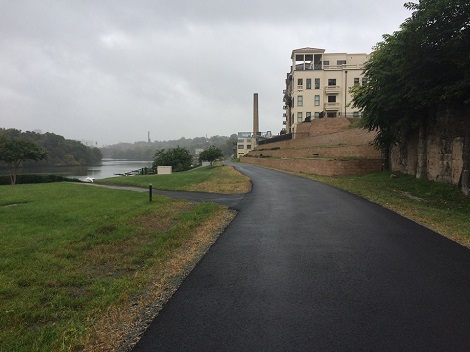 The trail starts out just past Great Shiplock Park on Dock Street along the James River and continues through Richmond into Henrico and then Charles City County before crossing the Chickahominy River into James City County and ends in Jamestown.

The Virginia Capital Trail Foundation, a non-partisan advocacy organization, spearheaded getting the trail funded and up and running along with VDOT who has been working for years on the construction and build out of the trail. Beth Weisbrod, Executive Director of the Virginia Capital Trail Foundation, led the tour and explained all the benefits it will have for the community.

“One of the biggest transformational powers of a separated trail like this is the fact that its available to everyone of all ages and abilities and its free and because of that it will encourage people to get out and use it as opposed to an arrow in a street where only the brave will ride their bike, this is a sidewalk,” she said. “I think it will also help carry the momentum we have in the bike culture because it’s safe and no one has to worry about getting hit by a car.” 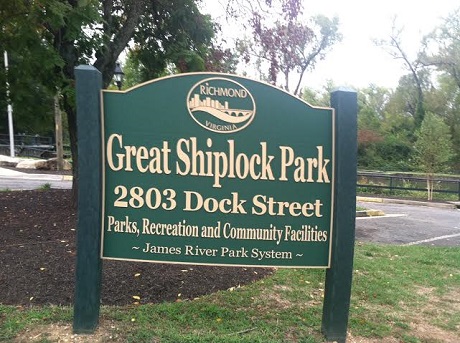 Harold Dyson, Project Manager for VDOT, said the trail cost Harold said around $74 million. Most of the funding came from federal set-asides, but private and state funding also contributed.

Weisbrod said the first half mile of the trail is a combination of private and city funds which amounts to $500,000.

Dyson said hundreds of people from contractors to designers worked on the trail and the last few months VDOT had all hands on deck months to have it paved in time for the UCI World Championships this past weekend. 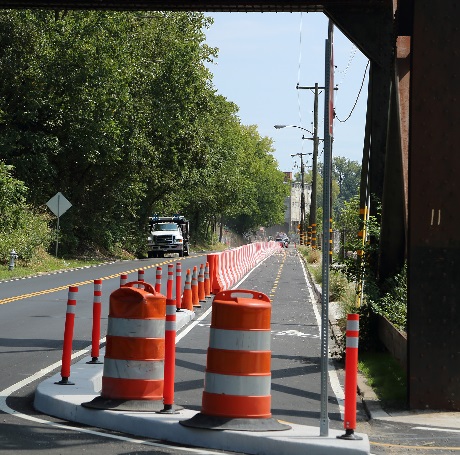 Officials broke ground on the project in 2005 in Jamestown. Progress from there was slow, but crept on bit by bit. The trail opened in sections first connecting Charles City Courthouse to Jamestown in 2006.

In Great Shiplock Park, officials have built a ramp for bikers to cross over to get to Chapel Island. A bike fixing station was even donated by Hardywood that sits right along the trail in the park. 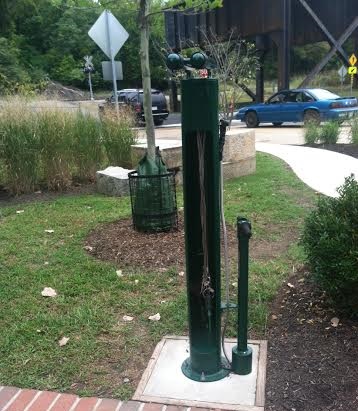 A second stop along the tour was made at Rocketts Landing where Rocketts resident Sean Cusask expressed his excitement over the trail’s completion. 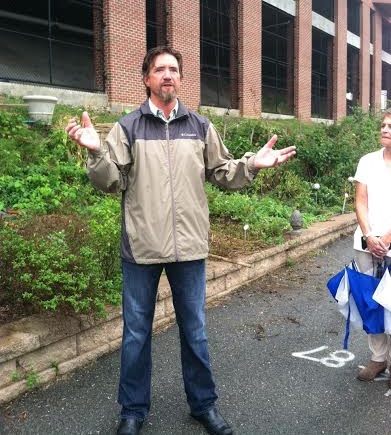 Cusask mentioned he sees a resident in his building riding his Segway along the trail to work every day and discussed draw he’s already seen from the trail just by looking out his window.

“We’ve got four bike racks just in this building alone there in every building and there all full and people are we are just dying, waiting for this trail to open up,” Cusask said. “There are runners, walkers, skaters, cyclists, you name it.” 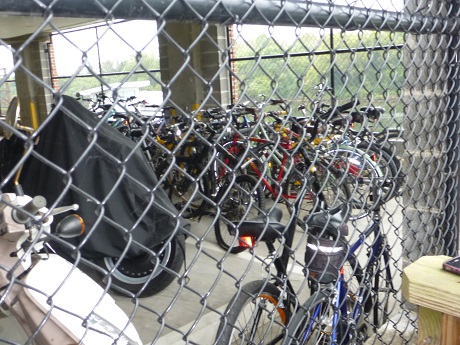 Cusask even mentioned he got video of the Dutch team from the UCI World Championships using the trail this past weekend and a lot of local bike shops were sponsoring rides on the trail throughout the week.

Weisbrod said the foundation conducted some studies of other trails in other areas that are similar to the Virginia Capital Trail to get an idea of what its potential economic and tourism impact could be.

She gave Silver Comet, a 61-mile non-motorized trail in Atlanta Georgia, as an example. The trail draws 1.9 million users annually. She didn’t want to set anthing in stone, but she was optimistic that 1 million people could be expected to be drawn to the trail. 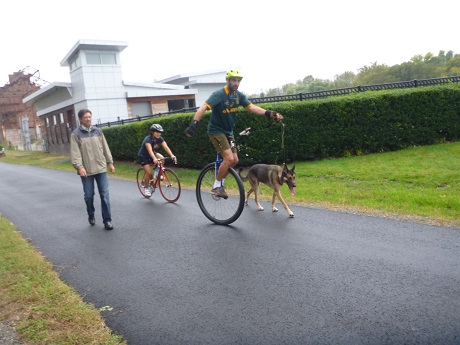 Charlie Donato, chairman of the Virginia Capital Trail Foundation Board of Directors, added to Weisbrod’s comments mentionioning that the community would see “businesses and restaurants pop up along the trail” and there would be a 25 percent increase in property value.

Actually, businesses that are already on the trail are reaping the benefits from riders and walkers.

Ronnie’s BBQ moved from their longtime Shockoe Bottom location to the corner of Varina and New Market Road and owner Ronnie Logan and his son Darrell said since then, their business has been thriving.

“For us it’s been great,” said Darrell Logan. “Every day we notice more people.”
His father Ronnie actually used to cook there with his father 30 years ago. The whole family is from the Varina area and Ronnie Logan said it’s nice to see the so many people come out to use the trail. 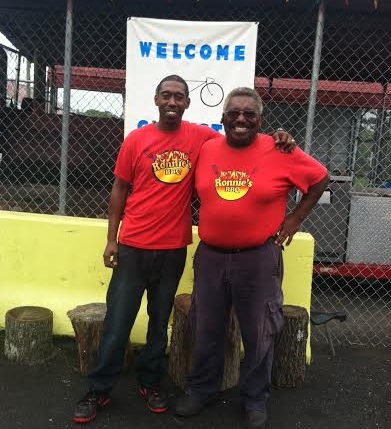 “I probably seen hundreds and hundreds of cyclists go through here and not only cyclists, but people just walking, people from the neighborhoods,” said Logan.
He added the bike trail is going to help save a lot of lives by keeping people off the roads.

The business even has a sign hanging up next door to their restaurant on a fence that says “Welcome Cyclists” with a bicycle hanging on the fence with tree stumps to sit on while you eat lunch. 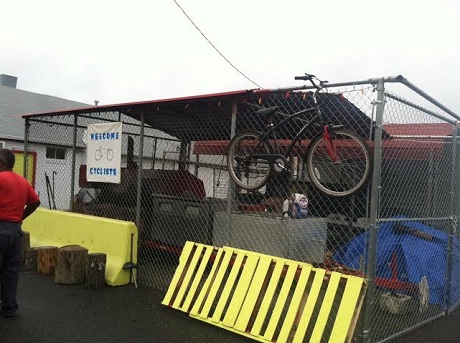 Weisbrod said traveling along the Virginia Capital Trail, the scenic route will look very different as you travel from Richmond out to the other counties.

“You have the urban section in downtown Richmond, you get a little suburban coming through Varina, if you keep going you’ll feel something very different when you get into Charles City County- farmland, plantations and then as you get into James City County it’s very suburban,” she said. 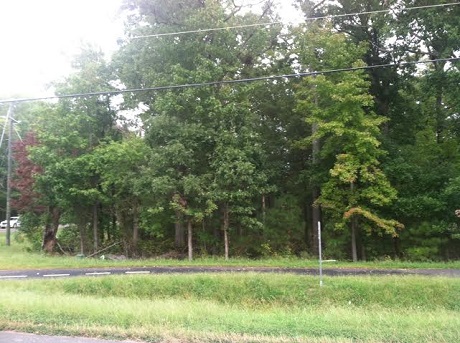 Henrico recently completed the trail at the new Four Mile Creek Park, and finished up a connection to Dorey Park, a project that’s been in the pipeline for some time.

Al Azzarone, Capital Parks Planning Manager for Henrico said VDOT came to them with the idea to go into their park and connect Dorey Park to get back to Route 5.

“We have a stretch of two and half a miles now connecting these two parks that parallels I-295, goes under 295 loops through southern end of Dorey Park and goes back out on Route 5,” he said. 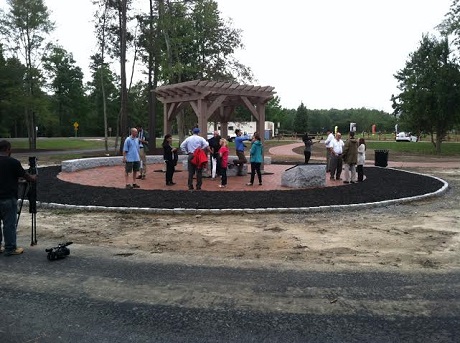 Dawn Miller, Supervisor of Recreation & Parks for Henrico said the benefits from the trail will be tri-fold for the county.

Miller also touted that tourism would get a boost with the 24 Civil War sites that reside in the East End of the county. Along the entire Virginia Capital Trail there are a number of historic James River plantations including Shirley, Berkley, Westover and a few others.

Todd Eure, Henrico Transportation Division Director went on to discuss what the county has in store for the future of the trail.

“Going forward, the county’s focus is going to be getting better access to the trail through the existing neighborhoods in the East End,” he said. “We’re already getting calls…whether it be a short trail we’re looking for opportunities to give people access that live in the area.”

The official grand opening of the Virginia Capital Trail is this Saturday October 3. There will be ceremonies in Richmond at Great Shiplock Park at 2803 Dock St. from 9 to 11 am and other ceremonies in Henrico, Charles City and James City counties.