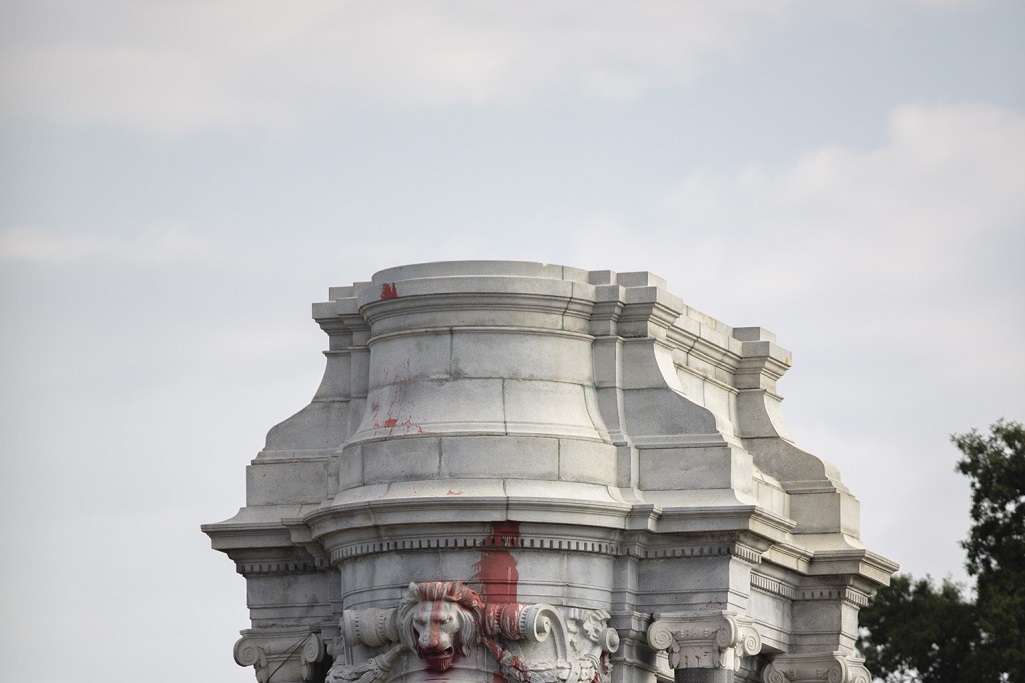 This morning, over 130 years after it was installed, the Commonwealth of Virginia finally removed the statue of Confederate general Robert E. Lee from Monument Avenue. RVA Mag’s John Donegan and Branden Wilson were on hand to see history being made.

Robert E. Lee, former commander of the Confederacy, awoke atop his bronze horse today to clamoring construction workers, whomping gasoline generators, and a lifting hook dangling over his head.

Since its placement in 1890, the statue of Lee has overlooked the city from the center of Richmond’s famed Monument Avenue traffic circle. Just before 9 am this morning, though, the statue was lowered onto a flatbed truck, after a construction worker who strapped harnesses around Lee and his horse cheered on the crowd from atop his cherry picker, and led the countdown: “Three, two, one!” The operation to remove the statue lasted maybe 50 minutes.

“I think it’s long overdue,” said Charles Otey, 67, a hospital worker at Virginia Medical Center. “What I’m so proud of is the young black kids and young white kids who came together to make this happen.”

The removal of the Lee statue marked the end of an era of Confederate monuments in a city that is arguably infamous for them. Monument Avenue, the wide boulevard that housed the most notable of the controversial statues, was long a proud feature of the city, and an international tourist site. Defenders of the monument today continue to celebrate the statue, and attest that Lee was not just a native Virginian but a Civil War hero. The majority, though, see it as a monument glorifying slavery.

The emotions surrounding the removal today were the culmination of innumerable protests to remove the statues, driven by thousands of Americans who were ready to see them gone.

“From what I’ve seen, kids nowadays just want to smoke weed, make love and get money,” Otey said as the surrounding crowd cheered. “But I think the world has changed. It’s more diverse. So we don’t want or need something that celebrates slavery and oppression. Our kids have made this happen, because of George Floyd. I love this, man. I mean, just listen to this.”

Those in the crowd — hundreds clustered in pockets around a multi-block perimeter — let out jubilant shouts and occasional chants. After the statue was placed on the flatbed, the crew then began sawing it in half, along the general’s waistline, to ease the transportation process.

The removal of Lee’s statue, one of the largest and most recognizable Confederate statues in the country, was expected to draw a large crowd. And though the removal didn’t begin until 8 am, some viewers showed up as early as 3:00 this morning.

D.C. resident Tim Smith arrived at the avenue around 3:20 am. Throughout the course of the day, he penciled in a collage depicting scenes from Richmond’s history, from its burning by fleeing Confederate troops to iconic images from last year’s protests. He’s been chronicling events like this since 2017. He’s unsure what he’ll do with the latest piece once he’s finished.

At 8:09 a.m., police opened a single gate into the viewing area. People politely rushed through the gate, some jogging with camera equipment or signs. Others sat back and photographed the rush. Richmond resident Chris Damon, who co-founded the local nonprofit Good Day RVA, filmed the event on a Super 8mm Camera.

“I’ve been filming the protests since the pandemic era on my Super 8, and I feel like today is ‘Monumentally Important,’” Damon joked. “This is probably one of the most photographed spaces in the state, if not the country.”

Damon said he’s filmed three cartridges — about 10 minutes of footage — since he began attending local protests in May 2020.

“I was trying to bounce between being conscious of who I am as a white man, in filming, but also feel it’s necessary to capture something as well… vignettes of our city and our people,” Damon said. “It’s also beautiful to see how this space has been reclaimed.”

Onlookers gathered behind the perimeter fence line to watch the removal. Many came to see the work of the past year through, and bid farewell to a statue that long stood as a symbol of racial injustice. Within the core of the crowd, speakers shared their reflections on the day.

“When this statue was erected in the earlier part of the last century, right after Birth of a Nation, it instilled fear and asserted white supremacy — the supremacy of the white man — in every aspect of white culture,” said Muhammad, a Church Hill resident. “Today we’re still suffering from mass incarceration and segregation by redlining in our schools and neighborhoods.”

The two-ton statue was transported to the Virginia’s Goochland Women’s Correctional Center for temporary storage, until officials decide what to do with it, according to Dena Potter, a spokesperson for the state’s Department of General Services. Potter added that Governor Ralph Northam’s office would seek public input on the statue’s future.

Northam ordered for the statue to be removed in June 2020, after the killing of black Americans such as George Floyd and Richmond resident Marcus-David Peters by police, which triggered nationwide protests over police brutality and racism.

“Virginia’s largest monument to the Confederate insurrection will come down this week,” Northam said in a statement Monday. “This is an important step in showing who we are and what we value as a commonwealth.”

The removal of the statue was impeded for over a year by lawsuits filed by a group of residents with property along Monument Ave, along with William Gregory, a descendant of signatories to a deed that promised the state’s protection.

“On behalf of all the Black men who have suffered in Richmond, I’d like to thank Governor Northam for having the balls to bring this thing down,” Muhammad said. “He stayed the course.”

The Supreme Court of Virginia ruled last week to deny protections sought in the two lawsuits challenging the statue’s removal. The count was unanimous.

“Democracy is inherently dynamic,” Justice S. Bernard Goodwyn opined in the ruling​​. “Values change and public policy changes, too. The Government of the Commonwealth is entitled to select the views that it supports and the values that it wants to express.”

“Every vestige of white supremacy has to be removed,” Muhammad said. “We can enter a new renaissance in Virginia, a new mainstream where Richmond is a real, consistent democracy.”

Over 160 Confederate symbols — more than a dozen in Richmond alone — were renamed or removed from public spaces in 2020, according to the Southern Poverty Law Center. The Lee statue was the first of five Confederate monuments erected on the avenue.

Against Lee’s wishes, the statue was erected in his honor, towards a legacy he wished abandoned: southern white citizenry which perceived themselves as paragons who simply fought for heritage, against an overwhelming northern force. Despite exhaustive “Lost Cause”-based efforts to revise its record, history has made clear that the cause of the Confederacy was dependent on slavery and subjugation.

“Richmond is no longer the capital of the confederacy,” Richmond Mayor Levar Stoney said in a statement Monday. “We are a diverse, open, and welcoming city, and our symbols need to reflect this reality.”

While many celebrated the day, others were quick to point out that systemic issues continue throughout the city. Many reckoned with the notion that the statue’s removal was nothing more than superficial change to satiate the masses.

“I think it doesn’t mean much unless there’s a radical change to the structure of Richmond,” said one Monument Avenue resident, who preferred anonymity. “They should improve social services and the lives of marginalized folks who live around here. [Lee] is a symbol of white supremacy, [the statue] shouldn’t exist. But also look at all the people trying to protect it right now — [like the] cops who, on a daily basis, oppress the folks protesting to get this taken down.”

“We’ll see how this goes, but it feels to me like a play to make sure that folks are sated,” she added. “It’s a step, but if they don’t turn [the monument] into a community space, it doesn’t mean much.”

Whether out of pride, shame, or metallurgy, Lee’s statue continued staring straight ahead, even as he was strapped to a flatbed and split down the middle.

Crews will return Thursday to remove plaques from the monument base and replace a time capsule containing Confederate memorabilia.

State officials said they will leave the 40-foot granite pedestal in place for now, adding that the city of Richmond and the Virginia Department of Fine Arts will work to “reimagine Monument Avenue,” according to a statement released earlier today by Governor Northam’s office. Last December, Northam earmarked $11 million for redesigning the avenue, with the Virginia Museum of Fine Arts at the creative helm.

“For too long, Richmond’s Monument Avenue told an incomplete and inaccurate story of the city and Virginia’s past,” said Alex Nyerges, Director and CEO of the Virginia Museum of Fine Arts. “The funding to transform Monument Avenue will allow us to re-envision an inspirational, forward thinking, inclusive, and healing place for everyone who lives in and visits our city and state.”

As for the pedestal itself, some racial justice advocates don’t want it removed, seeing the graffiti-covered base as a symbol of the protest movement that emerged in the city, and proof that the public can instigate some change. A group of VCU students joked that they should erect a statue of Young Jeezy or, more seriously, Harriet Tubman. One woman mentioned the late Alex Trebek. Most offered names of Virginia natives.

“They should build another monument, but make it one that is all inclusive and tells a story about everything and represents everybody,” Otey said. “It ain’t just about Black and white. I mean, look at Afghanistan and Mexico. Get a picture of everybody pointing up to the sky. Either way, all I want is peace and happiness.”