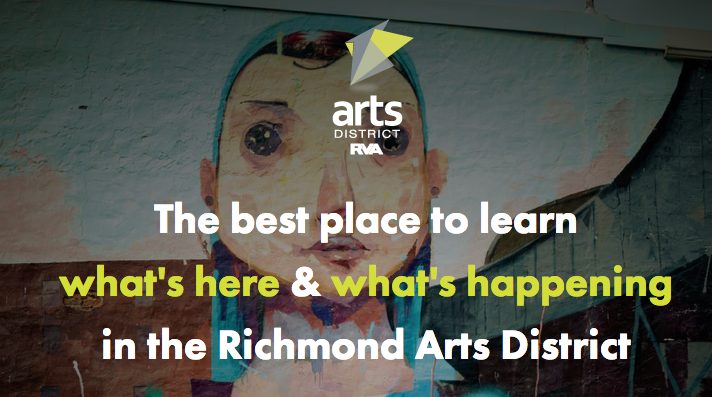 The Richmond Arts and Cultural District, which encompasses the area east of Belvidere St. continuing to just past 9th St., is known for its eclectic shops, art galleries, and eateries in Downtown Richmond. It is a hub for artisans and foodies and shoppers alike, and serves as the home to First Fridays. And in the near future, the District will have its own personal website.

The Richmond Arts and Cultural District, which encompasses the area east of Belvidere St. continuing to just past 9th St., is known for its eclectic shops, art galleries, and eateries in Downtown Richmond. It is a hub for artisans and foodies and shoppers alike, and serves as the home to First Fridays. And in the near future, the District will have its own personal website.

Meghan Barbato, the Director of First Fridays, said the site has been in the works since she became director two years ago. “When I came on they were just having some of the initial discussions about it,” Barbato said. “[T]he confluence of money and timing and ability have all converged so that we’re able to get the website up and running.”

Although there is already a website for First Fridays, Barbato said the general public sees little difference between First Fridays and the Arts District, so the intent of the new site is not to divide them, but show how they work in conjunction with one another. “Rather than try to keep them as two distinct things… it makes way more sense to have a unified surface,” said Barbato.

The main purpose of the website is to keep people up to date on events happening at businesses in the Arts District throughout the year. While locals are generally aware of the District and what it offers in terms of goods and services, people visiting from out of town don’t have access to that information or may not be as well informed.

Even though the District has “the most concentrated number of hotels in the city,” Barbato said that concierges were unaware of what was going on in the downtown area and couldn’t provide visitors with information about the District.

“Their guests maybe only knew what they were coming to town for, but couldn’t find out anything else,” she said. “The concierges were shipping people from downtown Richmond to Carytown or Shockoe Bottom or Short Pump.”

The site has not launched yet, but Barbato encourages businesses to register at the site as soon as possible, so they can have everything ready to roll when it makes its debut.

The registration process is a relatively fast and easy one, and businesses will be able to use the website to promote their events, among other things.

“After the site is launched there will be a button that says Add a Listing, and they can add either their own physical place to visit,” Barbato said. “Or they can also add an event that will populate our events calendar.”

But the website will be more than just a calendar for businesses to promote their events. Those who are looking for things to do in a specific area of the Arts District will find all that is happening near them, allowing visitors to narrow down their choices and attend things that interest them.

“If you wanna know what’s going on this weekend, you can go to the Arts District website,” Barbato said. “It’s going to be a very visual representation of what’s happening, and you can see everything that’s going on.”

While she has not set a launch date, Barbato hopes for the website to be out before December–but she’s not making any promise. “I don’t want to jinx myself,” she said.

Regardless of when it releases, the new Arts District website will serve as a missing link between not only the Arts District itself and First Fridays, but also visitors from out of town and those who live in the suburbs who weren’t previously aware of all the District has to offer.

It hopes to raise awareness by drawing in more business and promoting the arts. “There is a lot happening in the arts district and this downtown area of Richmond,” Barbato said. “We need to make everyone aware of what is happening in Richmond. That’s what the website is designed to do.”

Head on over to the website here to register your local business!