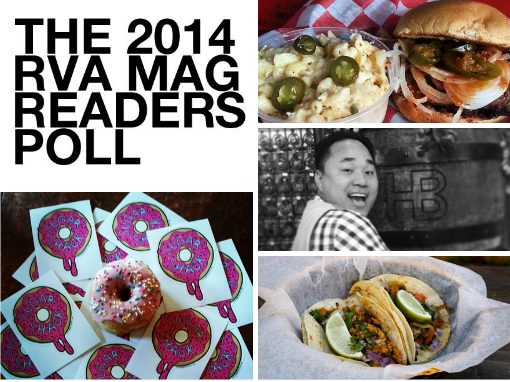 It’s been nearly two years since we last polled our readership about their favorite people, places, and things in our wonderful city. In recent months, we’ve seen growth and changes taking place around town that transform the cultural landscape in a lot of ways.

It’s been nearly two years since we last polled our readership about their favorite people, places, and things in our wonderful city. In recent months, we’ve seen growth and changes taking place around town that transform the cultural landscape in a lot of ways.

It started to seem like our last poll was getting a bit out of date — and of course, we were also wondering about a whole bunch of things we forgot to ask last time. Therefore, we came up with a whole new list of questions, which ended up being much longer than the last one was.

We didn’t want to overwhelm you, so this is just the first half; the rest will come around later, so keep an eye out.

Until then, learn about the best places to get tacos, pizza, and brews in our fair city — as determined by you!

Mekong gets most of the press it gets for beer, but it shouldn’t be a surprise to anyone that this Vietnamese restaurant’s menu is built on the strength of its pho. Next time you’re up there drinking a limited edition craft brew out of a glass boot, get yourself a bowl. You’ll be glad you did.

Nate Gutierrez’s tacos have been some of the most sought-after delicacies in Richmond since back when he was operating out of a food truck. Now that he has a permanent home base in Carytown, Nate’s proven that his tacos are the best in town–and our readership knows it.

How about a whole Sultana for dinner? Also, look at John…always so aggressive.

The Black Sheep is fighting the “war of northern ingestion” over in the Carver District with its battleship class of delicious subs. The USS Roanoke, featuring turkey and provolone topped with prosciutto, arugula, and other amazing condiments, is the star of this show–but unless you’re bringing reinforcements, we recommend sticking with the half-size. The full-size USS Roanoke is an enemy you will not defeat solo.

Look at these awesome stickers from @paperfreckles… available now!

When they opened in summer 2013, Sugar Shack took RVA by storm–and RVA has returned the favor,
as a constant flow of customers have kept this place busy ever since. Apparently there are plenty of RVA Magazine readers among that number–and who can blame them? Next time you need a sweet treat, look no further!

Belmont Pizzeria is a little slice of New York-style heaven right here in the Museum District. Their flawless pies are pizza the way it should be done. Zoning hassles have forced them to close earlier lately, so call your council representative and let them know–late-night pizza from Belmont is an essential ingredient of RVA nightlife and must be preserved!

Mmmm! Beef brisket sandwich with onions and jalapenos with a side of jalapeno mac and cheese. It's a great night to sit out on our patio! #BBQ #beefbrisket #richmond #churchhill #sandwich #macncheese #jalapeno #alamobbq #texasstyle #smoked #bbqsauce #alamorva #bestbbq #eatrva

This down to earth BBQ joint in Church Hill doesn’t put on airs, but it sure does deliver where high-quality food is concerned. From sandwiches and tacos to the classic rack of ribs, Alamo has exactly what you’re looking for, and it’s guaranteed to be delicious.

Located in the heart of the Arts District, Comfort offers Southern hospitality with a high-class twist. Reinterpretations of traditional classics prepared from scratch with local ingredients make this meat-and-three style restaurant beloved of foodies in RVA and beyond!

Favorite Place To Get Vegan Food in RVA: Ipanema

Ipanema’s been a Grace St institution for over 15 years, serving vegetarian, vegan, and gluten-free food to generations of VCU students–and young artists and musicians those students eventually turn into. If it’s vegan food you’re looking for, you can’t beat the selection or the quality that Ipanema has to offer.

In celebration of our 3rd Anniversary this Saturday, the cocktail masterminds at @HeritageRVA, @RooseveltRVA and @SaisonRVA have crafted some exceptional gourmet syrups to blend with our bright, tart Berliner Weiss. Thank you Matthias, Jay and T!

Hardywood have captured the hearts and minds of RVA’s craft brew community with their Belgian Abbey-style Blonde Ale, which was inspired by the ale-brewing Trappist monks of western Europe. From Belgian ascetics to RVA hedonists, Hardywood covers all bases with this Blonde Ale.

Favorite Place to Get Craft Beer in RVA: Mekong

When Mekong is the question, beer is definitely the answer, and all of RVA knows it. It’s no surprise to see CraftBeer.com’s Best Beer Bar In America scoring the approval of its hometown, but it’s always good to acknowledge the masters at work. So raise your glass to Mekong, and stop by for a brew soon!

Favorite Place to get Whiskey in RVA: McCormack’s Whiskey Grill

Known to its regulars as “the Whiskey,” McCormack’s Whiskey Grill’s position at the top of this poll category is eminently appropriate. Mac McCormack brings an unparalleled passion for high-quality liquor to the river city, and gives new meaning to the phrase “top shelf”–the really fancy stuff is so high up, Mac has to climb a ladder to retrieve it for you! But it’s always worth the trip.

Favorite Place To Get Tequila in RVA: Don’t Look Back

With an extensive tequila menu featuring over two dozen selections, Don’t Look Back wants to make sure you know that tequila can be smooth and delicious–sipped, rather than slammed back like fratboys on spring break in Cabo. On your next visit, learn the finer pleasures of this particular variety of liquor–and enjoy some great tacos while you’re at it.