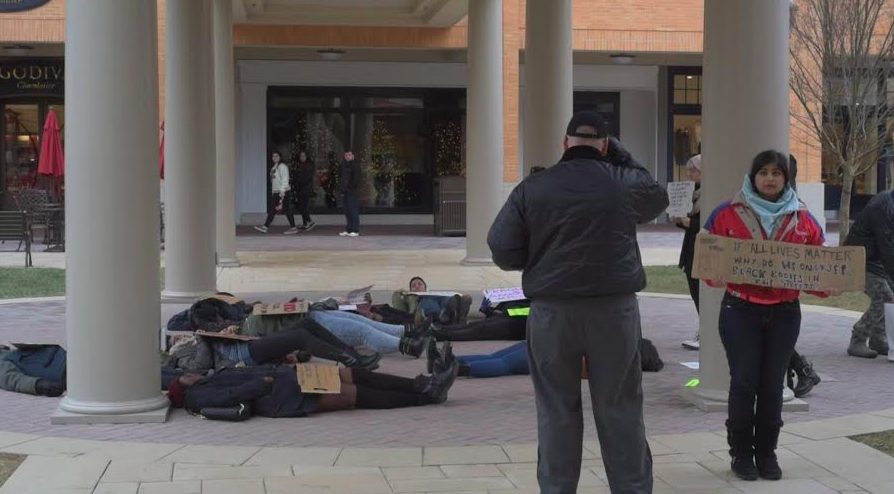 #BLACKLIVESMATTER took their concerns to the capital of Richmond’s wealthy West End yesterday, in a small but powerful display.

#BLACKLIVESMATTER took their concerns to the capital of Richmond’s wealthy West End yesterday, in a small but powerful display.

There were about 20 people who participated in the protest according to
Ashleigh Shackelford, an organizer for Black Action Now, the group which organized the protest yesterday and other recent protests around RVA.

Shackelford said they had been planning to go to Short Pump mall for a few weeks.

“It was kind of an undercover plan.” said Shackelford. “We definitely didn’t want to publicize it because we didn’t want to be in a position where we got in trouble.”

Despite expecting pushback, participants decided to continue with their plan.

“Short Pump is such a coveted area, especially by white people with a lot of economic power,” said Shackelford. “Being in that area and bringing the #BlackLivesMatter movement there would be a complete threat to everything we’re protesting against.”

The group of protesters met up at the mall and immediately began to march and chant “Black lives matter” as well as stage their die-in at the center of the mall where it would be able to be seen by the most people.

“It was imperative that we do this at Short Pump,” said Shackelford. “Bringing the movement there was really impactful because it was going to disrupt white supremacy, but also disrupt white people in their comfort zone.”

The movement achieved their goal, and brought attention to their cause while simultaneously disrupting the typical flow of the mall, upsetting those who worked there, according to Shackelford.

According to Shackelford there weren’t any people outside of their group showing support for their protest. “It was mainly white people standing and gawking.”

Highlighting the problem, Shackelford recalled a woman’s reaction. “There was one moment where a white mother was walking by with her child and protected him from us while we were marching.”

The participants spent around an hour preparing and then actually marching. The die-in lasted less time than they had planned–roughly four and a half minutes–due to threats of the police being called.

The police never came and the protestors never approached anyone in a threatening manner. The protesters chanted, made their point and left.

Most protesters there were queer black or trans individuals, and so reference was also made to Sage Smith, a black trans woman went missing two years ago. “We wanted to make sure that while we were there we made mention of Sage Smith because her case hasn’t even been heard around the world” said Shackelford. “We wanted to also make sure that we were also bringing light to the fact that black trans lives matter as well.”

At the end of their march the protesters left feeling they’d had an impact.

“Even if the white people walked away feeling really angry, imagine what it feels like to actually be a black person and be angry every day that you have to worry about dying, being dehumanized. being oppressed” said Shackelford.

This was just the latest in a series of #BlackLivesMatter protests around the Richmond area. Just two days ago a mixture of VCU students staged a die-in on Broad St and in Monroe Park, and a few days before that protestors also halted the first City Council meeting of the year.

Short Pump’s management was contacted for comment on this story, but had not responded by press time.