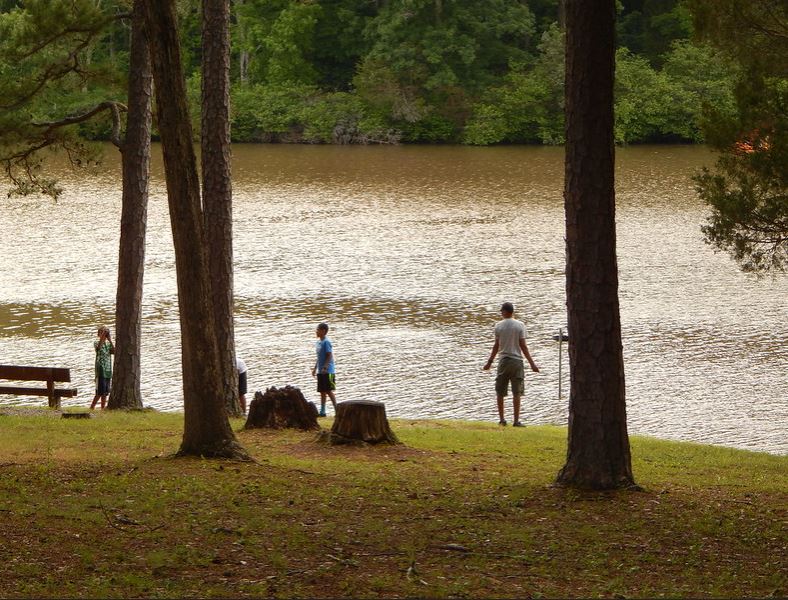 The half-mile road leading to a park in Prince Edward County was packed with cars parked on one side and a park ranger directing traffic on the other side. This was a normal 1950s summer day at what was then the only state park for African Americans in Virginia.

Prince Edward State Park for Negroes, as it was then called, could draw up to a thousand African American visitors per day that could rent bathing suits and cabins overnight.

“It was a place for people to recreate and be — they didn’t have that opportunity in other places,” recounted Veronica Flick, Twin Lakes State Park manager.

Prince Edward State Park was adjacent to Goodwin Lake Recreational Area, where only whites patrons were allowed. The two areas merged and were renamed Twin Lakes State Park in 1986, according to the park’s website.

Twin Lakes is one of 12 new sites added this fall to the Virginia’s Crossroads Civil Rights in Education Heritage Trail spanning Central and Southern Virginia. The trail was established in 2004 and focuses on the struggle African Americans, Native Americans, and women faced to receive an education in the commonwealth.

The parks were built by the Civilian Conservation Corps, a program established by Congress to help men find work during the Great Depression. Twin Lakes was added to the trail because of the education the CCC provided to African Americans who helped build the park in the 1930s. The builders were taught framing and roofing skills, Flick said.

“In ‘those days,’ education was the most important, and it was denied,” said Magi Van Eps, tourism coordinator for Prince Edward County. “If you were not a white male, you didn’t have access to an education.”

The impact of being on the trail brings more attention to Twin Lakes and its history, Flick said.

“For us to be a part of this trail, it not only brings more awareness to what the history of this park is, and its importance to so many people,” Flick said.

The trail also has added stops at Greensville County Training School in Emporia and Buckingham Training School in Dillwyn, according to Van Eps. The sites were Rosenwald schools, established by former Sears President Julius Rosenwald and Booker T. Washington to help Southern, African American children and teenagers receive an education.

The expansion of the trail 16 years after its establishment was a result of additional funding. The trail was originally envisioned to have more than 60 sites, Van Eps said. Instead, the trail was only able to add 41 sites using a grant from the Virginia Department of Transportation.

“There were all these other sites that were still very important, but they were overlooked at that time just because there wasn’t enough funding to fund them all,” Van Eps said.

The L.E. Coleman African-American Museum in Halifax and the Beneficial Benevolent Society of the Loving Sisters and Brothers of Hampden Sydney in Prince Edward County were also added to the trail during the expansion. Bobby Conner, who helped found James Solomon Russell-Saint Paul’s College Museum and Archives, another site on the trail that displays the history of the historically Black college that closed in 2013, said the additions couldn’t have happened at a better time.

“The expansion of it has come at a perfect time with everything that’s gone on this past spring,” Conner said, referring to the protests that took place in Virginia and around the country after George Floyd’s death in police custody in Minnesota.

“Anybody that goes along this trail will learn incredible amounts of history on what the struggle was from right after the Civil War all the way up until recently,” Conner said.