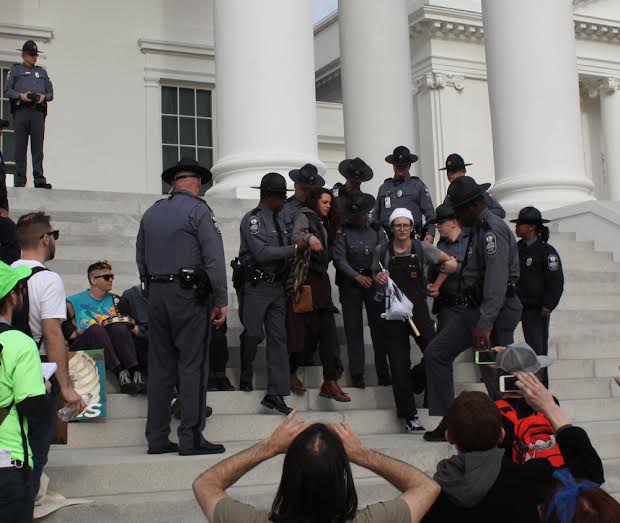 RICHMOND – Eight people were arrested for trespassing on the Capitol steps Saturday, following a rowdy march of environmental activists against Dominion Power’s plans to release treated water from coa

RICHMOND – Eight people were arrested for trespassing on the Capitol steps Saturday, following a rowdy march of environmental activists against Dominion Power’s plans to release treated water from coal ash ponds into the James River.

The event – “Dump Dominion, a march for our rivers” – was sponsored by the group No ACP. That abbreviation stands for the Atlantic Coast Pipeline, which Dominion plans to build across western Virginia to carry natural gas. Many environmentalists oppose the pipeline as well as the company’s plans for disposing of coal ash. 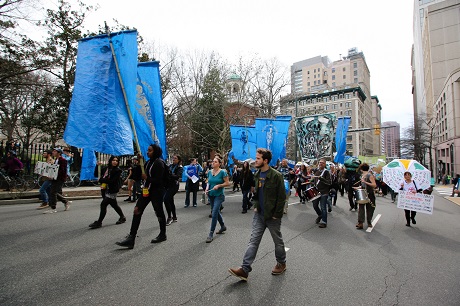 Hundreds of environmental activists and other citizens rallied at noon at the Bell Tower in the Capitol Square, protesting what they see as Dominion’s environmentally destructive practices. The environmentalists want the Virginia Department of Environmental Quality to rescind state permits that Dominion has received to release treated water from the coal ash ponds into waterways.

According to the organization’s pamphlet, “spreading toxic coal ash throughout our communities and poisoning our water is not a solution. The DEQ must repeal these discharge permits immediately and rewrite them to ensure that Dominion complies with their own promises to treat the wastewater to drinking quality standards.” 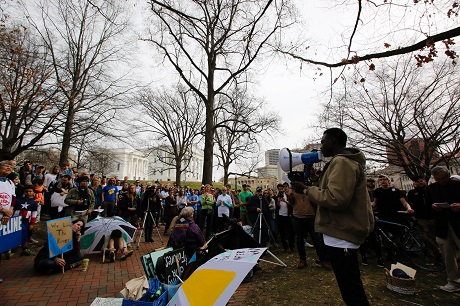 After hearing from guest speakers, the protesters were lined up at the entrance to Capitol Square on Ninth Street by the event’s organizers. The group included trained legal observers, media liaisons and liaisons to communicate specifically with police officers.

Participants in the march wrapped around the block and to the entrance to the visitor center under the state Capitol building. Many of the protesters were dressed in costumes or wore anti-coal-ash logos on their shirts.

They carried signs painted with such messages as “Poisoning waters will poison you” and “Dominion, we see you power here, but what about your conscience?” In the crowd were large-scale puppets, dogs with protest signs around their necks, and men beating drums. 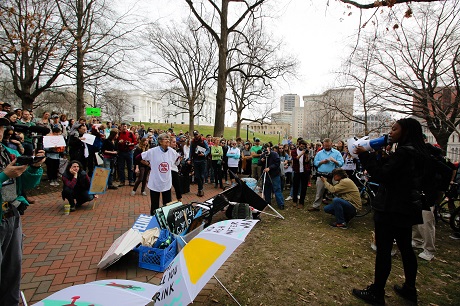 There were about 700 to 800 protesters in all, and they spanned the entire block. They included young children on the shoulders of their parents and other youth helping to hold signs.

After marching past both the headquarters of the Virginia Department of Environmental Quality and Dominion Power, the protesters returned to Capitol Square. They branched off into two groups at the fork in the sidewalk leading to the steps of the Capitol.

Encouraged by the crowd, more than 110 protesters ascended and stood on the Capitol steps, with their banners and signs. They continued to shout until the time for the march permit ran out at 3 p.m.

Evan Hoffman, a Richmond native, shared his reason for staying on the stairs until the permit time expired.

“I am on the stairs because I care deeply about the river. It has nourished us in many different ways, and we’re just being irresponsible with our future. It’s mind-blowing,” Hoffman said. “I’m here to offer my support and show that there are many people who want alternatives for the environment. With enough people power, we can hopefully make it right.” 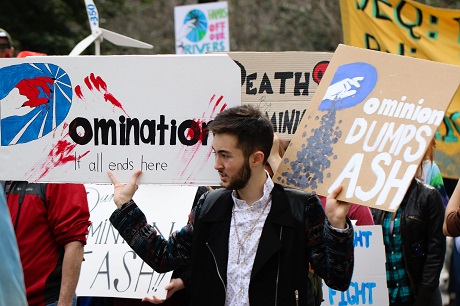 By 3:30, more than 40 police officers assembled on the Capitol steps or around the Capitol building, ready to take action against the handful of protesters who remained. The police gave the demonstrators a five-minute warning.

The demonstrators on the Capitol steps linked arms and waited until the warning was up. Police officers un-linked the protesters one by one and removed them from the steps. They were led around the side of the Capitol, where all of them signed a summons to appear before a local court for trespassing.

In all, eight people were arrested, including this reporter, who was on the Capitol steps interviewing demonstrators. 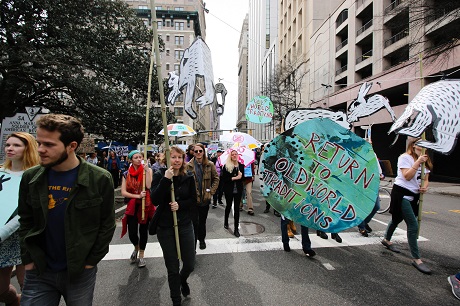 Before the arrests, during the march through downtown Richmond, speakers from several organizations talked about a variety of topics. Camille Spencer, of the Virginian Student Environmental Coalition, used a bullhorn to discuss the connection between climate change and colonialism.

“The constellations of oppression in our society depend on the ethics of domination and neglect passed down through the generations from land-owning whites of the 15th century to today’s corporation owners and politicians whose power grows from social inequality and environmental degradation,” Williams said.

“Today, we stand in that tradition. We are holding corporations and governments accountable for the segregation of communities and of environment. We will shine light on the accumulated cause and the embedded destruction of greed and capitalism, the inhalation of coal dust and the drinking of lead water is on their tab.”

Drew Gallagher, field organizer for the Chesapeake Climate Action Network, shared his thoughts on Dominion before the march began.

Representatives for Dominion said that there has been misinformation about the coal ash issue.
“No coal ash will be released into Virginia’s waterways. In fact, our plan is designed to safeguard against that,” said Janell Hancock, senior communications specialist and media relations for Dominion Virginia Power.

“The Virginia State Water Control Board in January approved strict permits regulating the discharge of water from the Possum Point and Bremo ponds. The de-watering of these impoundments is a key part of the closure process. The water will be thoroughly processed in treatment facilities to make sure it meets or surpasses all permit requirements and protects human health and the environment.”

Hancock added: “We are committed to keeping the public informed about this important project, including regularly posting information about the plan on our website at https://www.dom.com/coalash. The project will be transparent – the public will have access to the results of the water quality tests and can see for themselves that the water meets the permit requirements and will protect human health and the environment.”

David Botkins, director of media relations and communications for Dominion Virginia Power, said environmentalists have distorted the company’s actions to alarm the public and raise money.

“Our employees love and cherish the rivers and environment as much as they do. The difference is we aren’t going to spread misinformation and distort the truth as part of a larger fundraising campaign. We’ll continue to do the right thing of keeping the lights on and securing Virginia’s energy future,” Botkins said.

“While we respectfully appreciate the right to peaceful protest, there is a lot of misinformation out there being perpetuated about our closure of coal ash pond.”

Botkins said that the federal government has required Dominion to close the coal ash ponds and that “we are going about it in a very safe and environmentally responsible way.”

“Oftentimes, the organizations such as the ones that are protesting at the Capitol today get people riled up and unnecessarily worried and concerned, creating anxiety and panic – by spreading misinformation all in an effort to raise funds and generate media attention for their organization or nonprofit.”