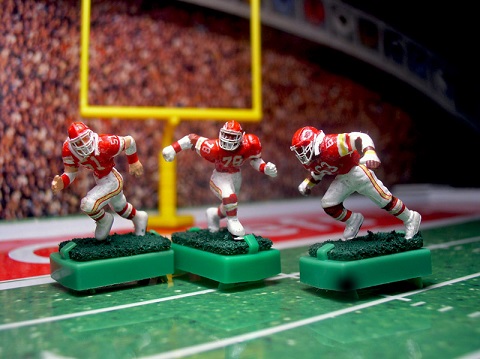 “I think of electric football as an underground art movement, it reminds me of when I got into punk rock and underground music in the early 80s,” said Chris Bopst.

“I think of electric football as an underground art movement, it reminds me of when I got into punk rock and underground music in the early 80s,” said Chris Bopst. “Back in the day, if you ran into someone that knew who Minor Threat, Black Flag, Public Enemy or Trouble Funk was, you immediately thought of that person as a friend. The same applies to electric football; it’s like you are being let in on a secret only known by a select few.”

Bopst is well known in Richmond for his podcasts on RVA News that feature music and audio clips complimenting a weekly theme, managing the music at Balliceaux, and his short-lived membership in the hardcore punk band Gwar as bass player, BalSac. But aside from The Bopst Show and his music, Bopst is an avid electric football fanatic, curating The Electric Football Game Art Show at Richmond’s Ada Gallery on West Broad Street offered July 31-September 15th.

The show will feature archival items and custom electric football figures, teams, game fields and art by players, artists and enthusiasts from across the United States. The show will also feature photographs by Lamb of God vocalist and photographer Randy Blythe, specialty Gwar-inspired teams by Slave Pit artists Bob Gorman and Matt Maguire.

Created by Norman Sas, owner of Brooklyn, New York-based Tudor Metal Products and Tudor Games, and introduced to the American marketplace in 1947, electric football became an immediate hit with over 40 million versions sold. Tutor, originally a military contractor during World War II, began to shift their interests from tanks and war equipment to metal musical instruments and other toys, giving Sas the original idea of the game.

“I was probably seven or eight when I got my first set,” said Bopst. “Electric football was the only toy you could get in the 70s related to football, so it was special. My friends and I played it all the time for a couple of years. Once I got to junior high and started getting interested in girls and music, the game went under the bed and I stopped playing. I still have the game and teams I had as a kid.”

As his game remained in storage for so many years, Bopst’s rediscovered his excitement for the game when discovering the extent of the fanbase and how fast electric football is making a comeback.

“Tudor Games, the original company that made the most popular version of electric football, has released a whole new line of products over the last year,” he said. “The company has regained the NFL license, lost decades ago, and its new product lines make out-of-the-box play much easier.”

“I didn’t play the game for decades, “he added. “It wasn’t until I got a computer and discovered how guys were playing it that I start playing it again. I never stop being amazed how this collection of people (they refer to themselves as “coaches”) affiliated with the Miniature Football Coaches Association have innovated every aspect of the game.”

As one of the only football-related boardgames in the 20th century, electric football fans had high expectations of the game, expecting the board pieces to play like their real-life counterparts. With many imperfections, including unstable and uncontrollable game pieces, the setup of electric football became a disappointment.

“Because of the inherently arbitrary nature of the game, electric football was a huge disappointment to 99 percent of the kids that played it,” said Bopst.

But with a new century, new technology and fan innovation began taking over.

“The guys in the Miniature Football Coaches Association have figured out how to play the game beyond anything I could have thought possible,” said Bopst. “Every aspect of the game from the players, the bases (the plastic mounts on which the figures are placed to enable movement) to the boards has been revolutionized…these guys have transformed what was the most disappointing board game of the 20th century into the closest you can get to playing football without physically playing it.”

Although electric football requires a level of commitment greater than the average person’s, the visibility, fanbase and consumer’s ability to purchase the game at retail outlets is the greatest it has been since the 1970s.

The Electric Football Game Art Show will be held at Ada Gallery at 228. W. Broad St. from
July 31-September 15.