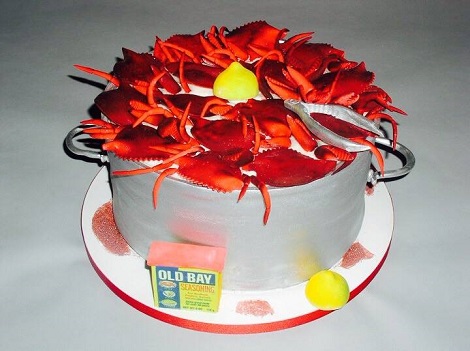 From a replica of the Fifa Women’s World Cup, to crabs in a bucket, to elaborate wedding cakes, Cakes By Graham helps tell a story through his cakes

Graham Haddock is quite tall with an easy grin. He has a friendly air about him and is the owner of the local favorite Cakes By Graham.

Graham Haddock is quite tall with an easy grin. He has a friendly air about him and is the owner of the local favorite Cakes By Graham.

Haddock and his team have produced lovely and intriguingly unique cakes for Richmonders over the last 20 years.

His devotion to excellence of service and product is probably what keeps him around as a local staple for those who are looking for an compelling way to tell a story through food.

“I like the standard at which we work to be as high as possible,” he said. “Where we can present a well-executed product we feel good about that exceeds the customer’s expectations.”

Haddock said most of his orders come from returning clients.

My own mom often ordered childhood birthday cakes for my siblings and I from Graham. They were usually seaside-themed for our joint love of the ocean.

He says the best endorsement is when people love his cakes enough to return for later occasions.

“I have a couple of people who I’ve done their wedding cakes, and then they had children and I’m doing their children’s birthday cakes now,” he said. “That’s the nicest compliment.”

Three production employees and an office manager comprise the Cakes By Graham team.

“I interview everybody myself,” he said. “I have very high expectations of my employees, as they will tell you,” he said with a laugh.

Upon finishing high school in his English home town, Haddock decided to join the military as a chef for the British Army.

After working for 16 years across Europe in the British Army, Haddock participated in an exchange program with Fort Lee in Prince George, and he said he never really left.

Haddock joined a running club while at Fort Lee, giving him a network of civilian friends and a way to explore central Virginia on foot, which is how he ended up in Richmond.

The British Army was downsizing and he was looking to come out, so he arranged early retirement and stayed in the area.

He says he loves the climate and the people of Virginia. Haddock never wanted to open a restaurant, nor be a caterer, so he ended up working at a couple bakeries around town.

“After a couple years working for other people, I thought there was a need to do something that was a little bit more than was currently being done,” he said. “So I opened my own business.”

Haddock started Richmond’s only custom cakery in 1994, subleasing out of a bridal store. Later, he worked a two building operation before finally moving all aspects of his business into one space in the Museum District.

He says he still uses the extensive business plan he wrote 21 years ago. It took him about six months to write and is still key to how his business runs.

He says his team has different challenges every week. Those challenges can be anything from creating the Fifa Women’s World Cup out of sugar to narrowing down the varied ideas of a client into one central theme.

But not everyone comes in with a Pinterest board worth of ideas. “Some people have no idea what they want and don’t know where to start. So we have to introduce them to the process,” he said.

“Then we try to have them be as involved as we can, so we’re decorating a cake that they’re going to like.”

Haddock said he loves the variety of what they get to do. “Each cake is very different. We try and find the story. Is there a story you’re trying to tell? Is there an emotional connection we can relate to?”

His attention to both artistic detail and his clients’ stories make his cakes and unparalleled part of the pastry industry.

Flip through his photo galleries or check out his flavor options (everything from your standards like chocolate to adventerous ideas like his honey liqueur flavored cake with apricot filling) on his website.