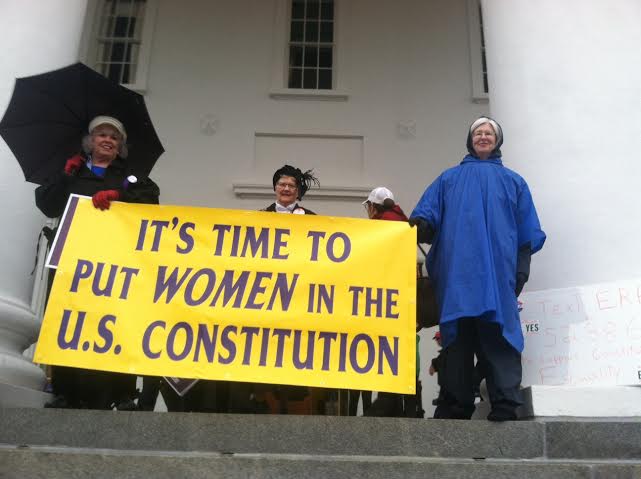 Virginia Gov. Terry McAuliffe joined a very lively, large crowd of women and a few men Tuesday morning in the Patrick Henry Building in Capitol Square to show his support for the ratification of the Equal Rights Amendment.

“Rain or shine, equal rights!” a group of women’s rights advocates and representatives from ERA advocacy groups shouted at the top of the Virginia Capitol steps this morning. 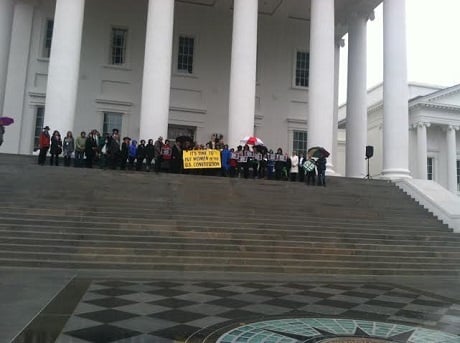 Introduced in 1923 by suffragist leader and National Woman’s Party founder Alice Paul, the ERA states equality of rights under the law shall not be denied or abridged by the United States or by any state on account of sex. Virginia is one of 15 states that have not ratified the ERA yet, guaranteeing gender equality in the U.S. Constitution. 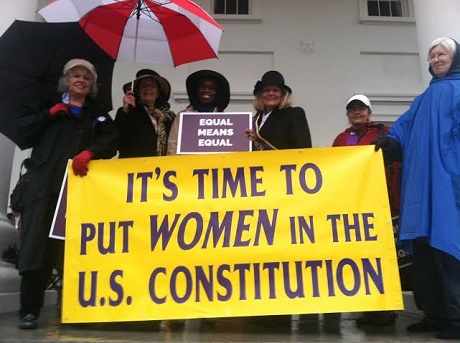 Local organization Women-Matter, Congresswomen, senators, Ralph S. Northam, Lieutenant Governor of Virginia, Nancy Rodrigues, Secretary of Administration of Virginia,the League of Women Voters of Virginia, students, local mothers in the community and other women’s rights activists spoke in honor of the suffragists who rallied for equal rights on the Capitol steps 100 years ago. The Centennial rally held today was to push Virginia to pass the ERA. 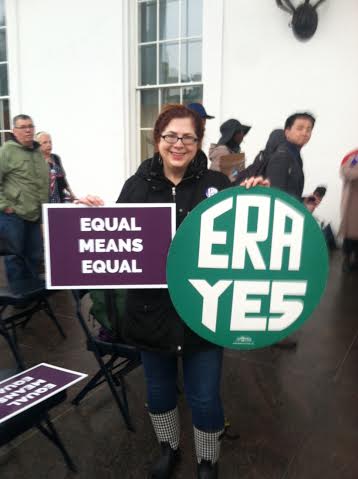 Keynote speaker McAuliffe was greeted with a standing ovation and cheers and took to the podium to discuss his views on the ERA and creating equal rights for all women in the Commonwealth.

“I told women I would be a brick wall to protect their rights and I’m proud to stand here today that brick wall is stronger than it’s ever been,” McAuliffe said. “We’ve very quickly with executive order right off the bat, no discrimination at all in our state work force based on who you love, gender, religion at all we just cannot have that here in the Commonwealth of Virginia.”

He touched on the improvements being made in healthcare and education.

“I’m putting a billion dollars of new funding into education,” he said. “Teacher pay raises are long overdue, we are fully funding teacher retirement plans two years ahead of time, I’ve put $139 million in the budget to put 2,500 instructional staff back in the classrooms. Thats hat this budget that i have proposed, I want to make sure every woman has access to the best education possible in the Commonwealth of Virginia.” 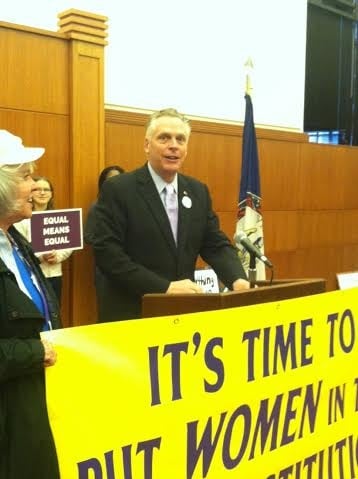 McAuliffe also mentioned his task force and pilot program put in place in 2014 to combat sexual violence on college campuses.

“It will allow us now the opportunity to have independent neutral investigations of criminal incidents of sexual violence” he said. “We need to keep our colleges safe for everyone. We are going to end campus sexual violence.”

Before closing, the governor congratulated the Virginia League of Women Voters organization for their efforts for women’s rights over the years.

“Virginia legislature did not show their support for the 19th amendment as you know until 1952,” he said. “We should make it easier for people to vote, not more difficult. The league has continued to shine light to make sure every women and man had the opp to go vote so I thank you for your dedication to the great work on this.”

We’ve been fortunate enough to get the ERA out of the Senate committee repeatedly, and I want to thank Leslie Bynre for starting that legislative effort,” Ebbin said. “Lets be persistent in getting it out of the House of Delegates whether it’s next week in this session if not we’ll be back until it does.”

Del Sam Rasoul, (D-Roanoke) is a member of the Virginia House of Delegates and spoke on the continuing discrimination facing women and people of color today.

“A guy with a last name Rasoul getting elected in Southwest Virginia you see one or two things in discrimination,” said Rasoul, “This is a common injustice that we all have to fight against. This discrimination is an ignorance that we must fight. I don’t understand why we have such a brick wall there that’s preventing the ratification of the ERA so as a member of the privilege and elections committee we’ve been working hard to have a fair voice.”

Senators Jennifer T. Wexton and Scott A. Surovell are Chief Patrons of SJ1, a bill that would ratify the ERA, and recently just cleared the Senate floor. The two spoke on the importance of getting their legislation out of the House since in the last six years, it’s been killed there five times.

“Im so happy to be here to celebrate this 100th anniversary of when the dedicated group of women and men gathered on the Capitol steps to demand that women get the right to vote,” Sen. Jennifer Wexton said. “We still have a ways to go…only the Constitution grants Constitutional rights.”

Sen. Scott Surovell also weighed in on his personal connection to the bill.

“In 1972 I was one years old and my mother came to this building across the street to testify in favor of the ERA,” he said. “She’s always told me how it important it was to her that’s why when I was elected to the Virginia state Senate the first bill i put in was ratification of the ERA.”

Sen. Barbara Favola also spoke on the matter advocating that the ERA would guarantee women the same rights and privileges as men in the working world.

“We’re more than half of our population, we’ve worked hard, were mothers we’re sisters, we’re daughters, and you know we get a lot of work done and that should be recognized,” she said. “One day we will find it easier to get equal pay for equal work passed, we’ll be able to get better family leave programs, we’ll have more access to health care and our country will be stronger and healthier.”

Leslie Byrne was the first woman elected to Congress from Virginia and has focused her efforts on getting the ERA passed. 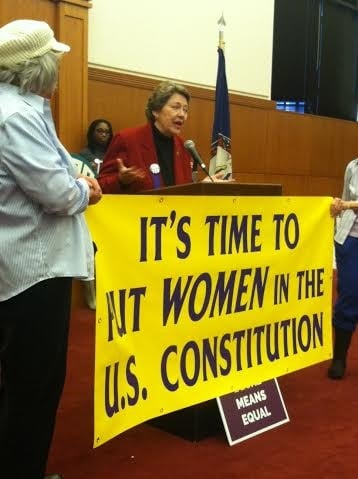 “Equality under the law shall not be denied,” said Byrne. “I wish that equality under the law was given as much attention as a well ordered militia right to bear arms. Wouldn’t it be lovely if those folks over in the General Assembly thought as highly as 3 and half million women in Virginia as a hand full of gun owners?

She stressed to the crowd it was their job to reach out to the GA and let them know the ERA needs to be passed.

“You better find a reason to make people vote for this,” she said. “Whether it’s their self interest, whether it’s their daughters, their wives, their mothers, you know the right to vote was passed by a guy that bullied by his mother. You do have the power. You have shown grit, you have shown determination, we will get this done.”

It wasn’t only politicians and individuals from women’s rights groups at the rally, there were also actual descendants from founders of the women’s rights movement.

“We hold these truths to be self-evident, that all men and women are created equal,” said Coline Jenkins, quoting her great grandmother, Elizabeth Cady Stanton, founder of the Suffragist Movement. 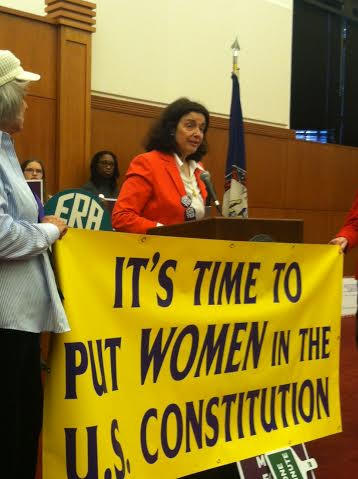 Jenkins was referring to Stanton’s Declaration of Sentiments, presented at the Seneca Falls Convention, the first women’s rights convention held in 1848.

Jenkins then directed her speech directly toward Del. Mark Cole and Speaker of the House William Howell, both in opposition of ratifying the ERA.

She exited the podium holding up the sign that read, ‘Equal Means Equal.” 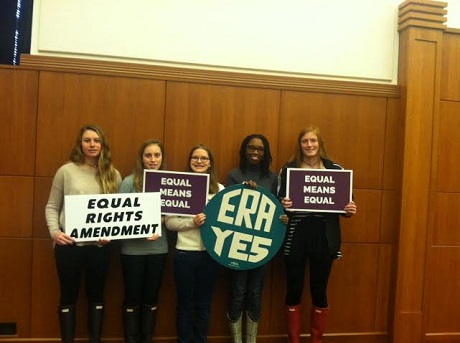 SJ1 is scheduled to be heard in the Priviledges and Elections Committee on Friday at 9:30 a.m.