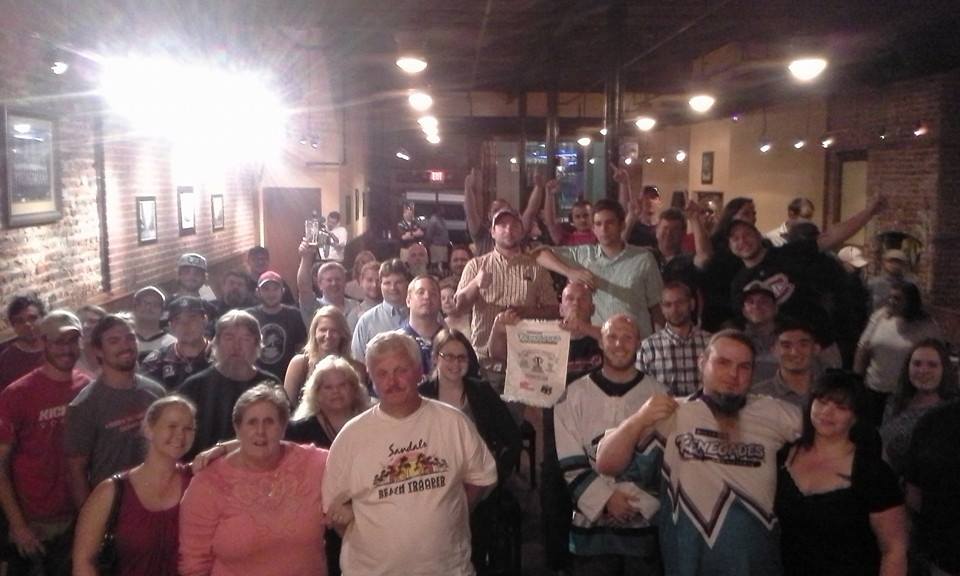 Hockey in Richmond Gets Debated by Former Owners and Fans

The first official meeting of the ‘Bring Hockey Back to Richmond‘ movement nearly took over downtown Capital Ale house last night. The topic of hockey in Richmond blew up over the last few weeks. Alan Sams, founder of the Facebook group, kicked things off with over a hundred fans in attendance. Guest speakers included Allan Harvie Jr., the former owner of the Richmond Renegades, Jon Lugbill, the executive director of Sports Backers, and Brad Robinson, the owner of the Richmond Generals hockey team, they discussed the future of Richmond hockey and the challenges they face.

After just a few weeks the timid Facebook group, which was merely a fan forum, has skyrocketed into a full on push for the return of the ice-sport. Going from 700 likes up to over 2,600 in just a few weeks does say something about the fans, and their enthusiasm in wanting hockey to come back to Richmond. The meeting covered an array of topics, mostly concerning what it takes to get and maintain a hockey team, and it’s a lot more than you would think.

“We have a city that needs hockey, we all know that,” said Harvie before pointing out the questions raised if Richmond wants to bringing a hockey back.

Harvie said he spoke with folks at the Coliseum and these were the top issues they had. “There’s a lot of interest in bringing hockey here, but interest and actually taking action are two different things.”

Harvie went on to discuss more about getting an owner here, and one of the things that crossed his mind was doing what Green Bay does, where the team is owned by the citizens of the town.

Harvie said he spoke to an attorney about it, but for now it’s just a thought. Nothing is certain, and money is definitely a certain issue. It would take a potential owner to shell out around a million dollars in order to get a team going.

“The days of the ‘90s are gone,” Harvie said. “I started the Renegades in 1990 with $1000, and sold it three years later for seven figures. Those days are gone. We have to be realists about it.”

Getting into a league is also an issue. The American Hockey League has the Norfolk Admirals, so there is a neighbor there, but to get into the AHL a team must be for sale, which would be around three-and-a-half to six million dollars just for the team. Other fees on top of that would add even more millions.

“these are just challenges that we’re faced with that need to be solved,” Harvie said.

Harvey also stressed the rumors about conditions of The Coliseum leading to the end of hockey in RVA are false. “The Coliseum aren’t the bad guys here. I’ve worked with the Coliseum for many, many years. That’s not an issue.”

Right now there are three rinks in Virginia without hockey, Richmond, Hampton, and Roanoke. “What about a league that’s more local? There are open facilities around. There’s a rink in Winston-Salem. A five team league starting the first year would be ideal. A lot of the larger, richer leagues started with five or six teams.” Harvie went on to elaborate on this idea, and what owners and investors would need to spend, and how something like this could happen.

“Ownership groups are more willing to consider it if there’s really strong fan support,” Lugbill said. “The money is real. What Allan was talking about is real. We put a lot of blame on ourselves, but sometimes ownership groups can get themselves into trouble. So with all that said, it was only a matter of having the right ownership group.”

Lugbill said hockey in Richmond was always dominated by a few individuals, creating too much work for those few folks to handle. “It’s easy to lose a lot of money,” he said.

Robinson, who purchased the old Skate Nation and Richmond Ice rinks to give his team, the Generals a place to play, helped support youth and junior hockey initiatives.

“My experience in dealing with (ice rinks) is that it’s a tough business. The challenge is not because people don’t want it, it’s how to make the economics work and it’s how to attract an ownership group. It’s an expensive sport. It’s expensive to operate,” said Robinson.

After the forum the speakers elaborated on the issues by taking questions from the audience. One fan asked about rivalries, and how they’re a vital part of hockey, and if they were other groups like us. “There are groups in Roanoke, there are groups in Winston-Salem. If you look it up on Facebook, you’ll find someone,” Sams said.

No matter the outcome of last nights meeting, the conversation around the return of Hockey here in RVA made great strides. A month ago, no one even thought hockey in Richmond could be a possibility, but today it’s gaining momentum.