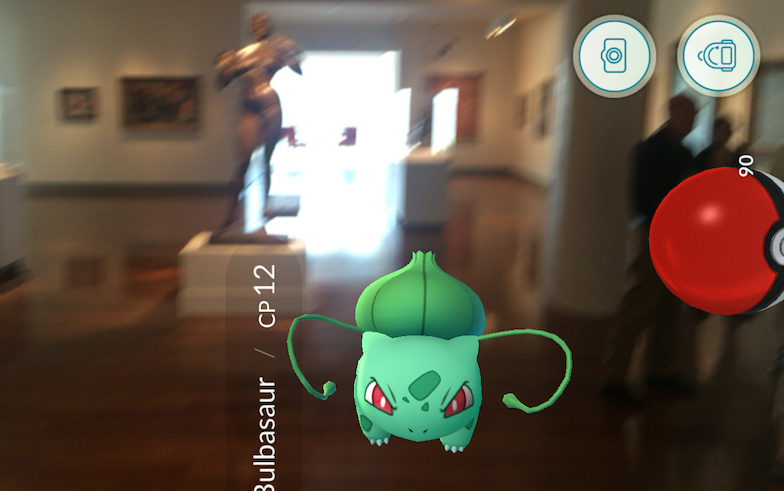 I caught a Bulbasaur in the VMFA’s New American gallery: Pokémon Go is alive and well in RVA

When I heard Pokémon Go had finally launched, I was excited to get out of my house no matter how hot it was. Turns out it was very hot but Pokémon Go might just be worth braving the elements. And with over 50K downloads in the first 24 hours, the team at Nintendo, the Pokemon Company and Niantic have released a truly unique and interesting variant on the beloved series.

When I heard Pokémon Go had finally launched, I was excited to get out of my house no matter how hot it was. Turns out it was very hot but Pokémon Go might just be worth braving the elements. And with over 50K downloads in the first 24 hours, the team at Nintendo, the Pokemon Company and Niantic have released a truly unique and interesting variant on the beloved series.

Pokémon Go is the new mobile app version of the beloved Nintendo game Pokémon which was first released in 1995. It has since spawned dozens of games, TV shows, merchandise, and a mess of other expensive things that parents have wasted their money on and kids(and adults) have fallen in love with.

Pokémon Go offers a new experience for the game. It’s free (with in game purchases), asks players to walk around the real world using GPS systems as a guide, and then gives them a chance to catch and battle the animals in real time.

This morning I charged up my phone, kicked on the app and started. Then it crashed. But then it started again and asked me to log in. You can use your “Pokémon trainer ID” or a gmail account which is easy enough.

You’re given a few Pokéballs to start with and then the three class base pokemon become available for you to catch near by (at least for me). Sadly, my first choice, Charmander, was in my neighbors back yard and I wasn’t trying to hope a fence, so I walked to the end of my block and caught my first Pokémon – a Bulbasaur. 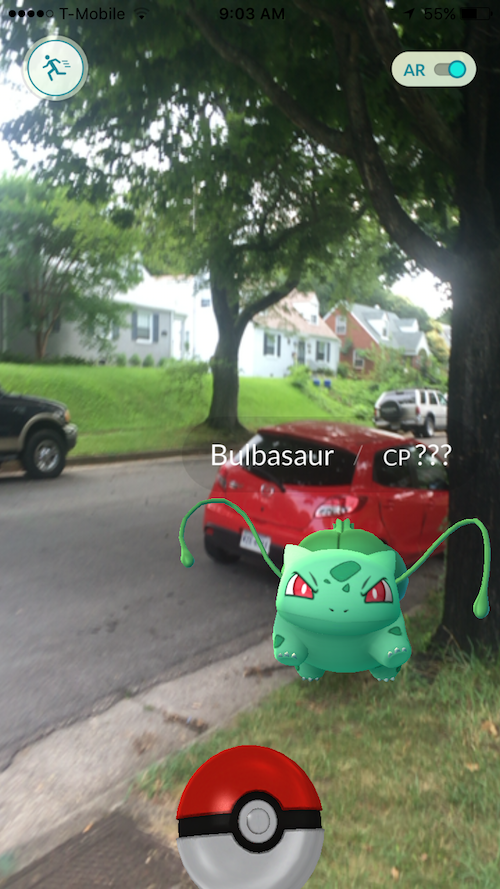 Then the game froze and crashed – but on restart it counted my first catch so I was on my way. From there, I headed to Byrd Park and struggled to find more, but I did discover a number of PokéStops near by. These real world locations, often statues, public points of interest or businesses, offer free Pokéballs and eggs by “spinning” a coin there. It’s a little silly, but once you try and catch a Zubat you’ll realize how easily you burn through Pokéballs. 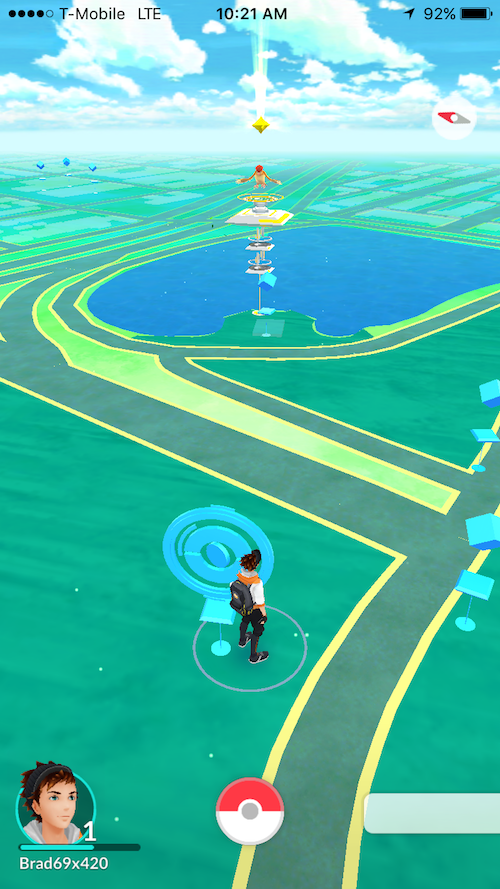 Next, I noticed rustling in the digital grass around me – sadly this was less of a hint to location of possible Pokémon and more a broad guide. But a blanked-out list of possible Pokémon showed up along with “paw prints” which are an actual guide to proximity. The closer the Pokémon, the fewer the paw prints. If it sounds a bit complicated, it’s not, but it does require some intense staring at your phone and following directions if you’re on the hunt for a particular beast.

But at the same time, I caught a number of wild Pokémon just walking down Carytown – about 4 to be exact (including two Zubats who burned through about 10 of my new Pokéballs – fuck Zubat.) 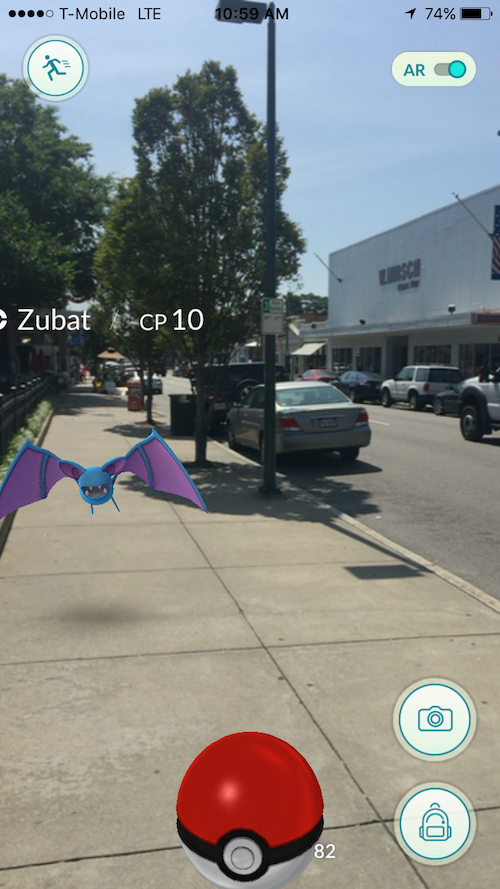 Sure enough, Carytown’s beloved card and board game shop One Eyed Jaques is also a Pokéstop so I stopped in and spoke with the store’s GM Rob Fary about what this could mean for the local shop.

“I got a respect for it, but it’s not my personal thing,” Fary said, comparing the Pokémon craze to another popular item from nerd culture, super heroes. “I’m not big into super heroes, but I have a great respect for comic books. Pokémon, it’s alive and well. It’s at its height since about 12 years ago. So things like this, I could see being very popular. Sadly, I do paperwork and the human resources side of things here, I don’t have time to travel all over the place catching things.”

Fary said he spoke to some friends who spent hours driving around in their car last night trying to hunt down Pokémon. He’d heard stories of people already ending up in bad neighborhoods and getting assaulted for their phones as they walked blindly towards “catching them all.” We couldn’t find a story corroborating this, but police have asked players to keep their heads up when walking around in public.

Carytown is actually full of Pokéstops, and even has gyms at either end (I’ll explain how gyms work in a second) – so I stopped at another beloved childhood store to ask how they felt being a Pokéstop.

“It’s Pokémon, I’ve been playing it since I was 6,” said Nicholas Waddell (pictured below), a Manager at World of Mirth. He had actually just walked out the door to go hunt some more down when I chased him down to ask him a few questions. He said he’d been following the development of Pokémon Go for some time and installed the game shortly after it went live last night. He spent the rest of the evening walking around the Fan with his friend and boyfriend finding Pokémon and finally capturing a gym. 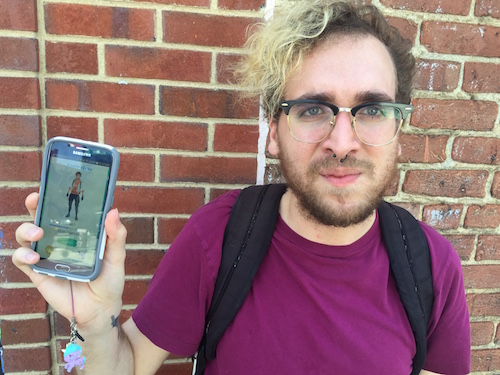 “I caught a Squirtle to start with,” he said. “Then there was a Bulbasaur right up the street. I think ghost Pokémon show up at night so I was really excited to see a Ghastly… but I didn’t catch that.”

So gyms, as Waddell explained, are the only place in the game you seem to get to battle in. You fight to capture gyms, and if you win them, you and your “team” (assigned by color) take control of the gym and can leave Pokémon there to defend it. Waddell conquered the gym at Joe’s Inn but woke to discover he had lost control.

“I left my Zubat there but he got killed, or fainted,” he said. “He was sent back to me though.”

A level 7 trainer, Waddell is also a manger of a toy store, and while the location is a
Pokéstop, he’s not sure if it will impact business. “I don’t know,” he said. “The stops, you don’t get anything for going in, so people could just roll by and not come in.” 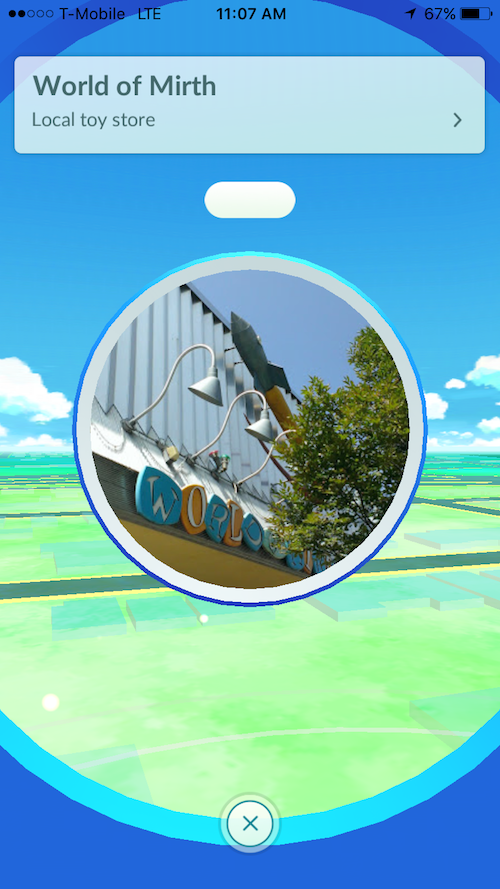 I wished him luck as he continued he journey. Meanwhile I rode to one last spot, The Virginia Museum of Fine Arts, before heading into the office. Sure enough, there were a number of Pokéstop on the grounds, one at Captain Nemo’s Accumulation and one at La Riviere. (seen below) 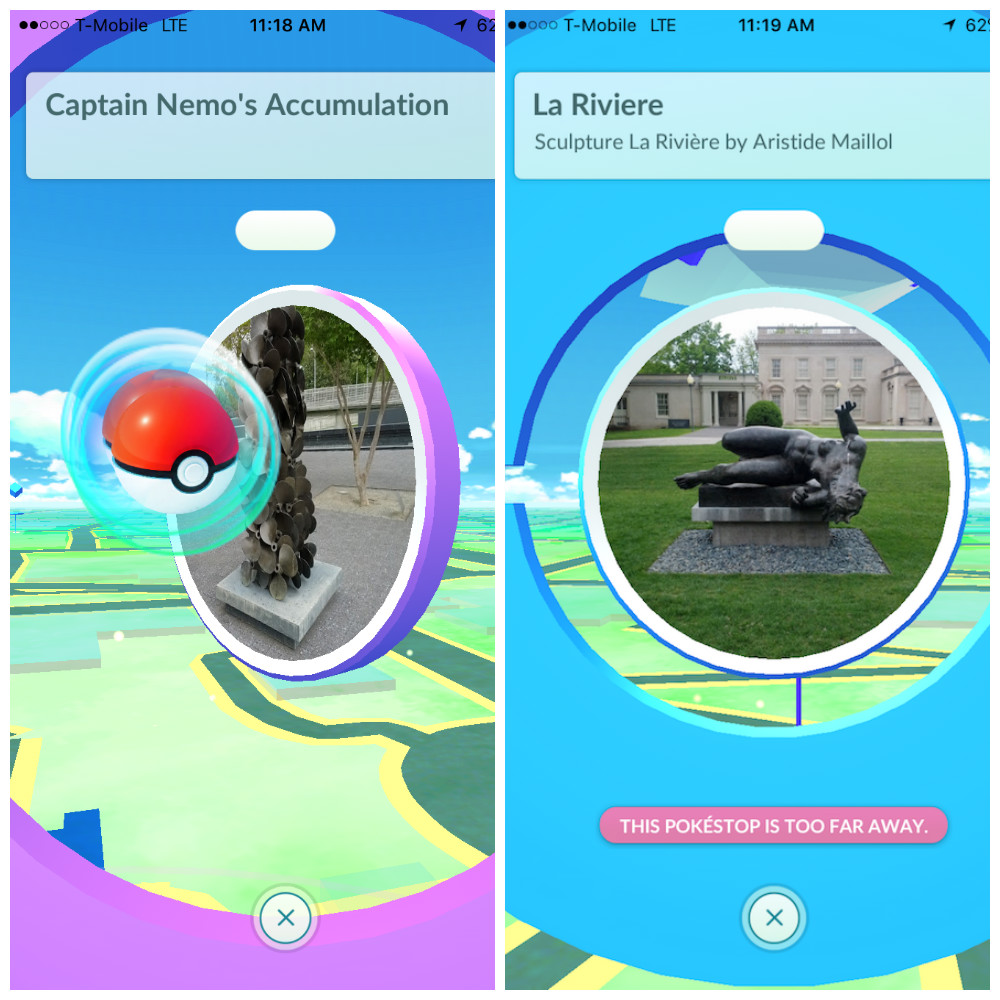 But what was even more excited, besides free Pokéballs, was Pokémon actually showing up in the galleries. That’s when I caught another Bulbasaur in the New American Gallery (top image).

I also found a Zubat in Kawase Hasui’s snow landscapes exhibit, but as I said, fuck Zubat. 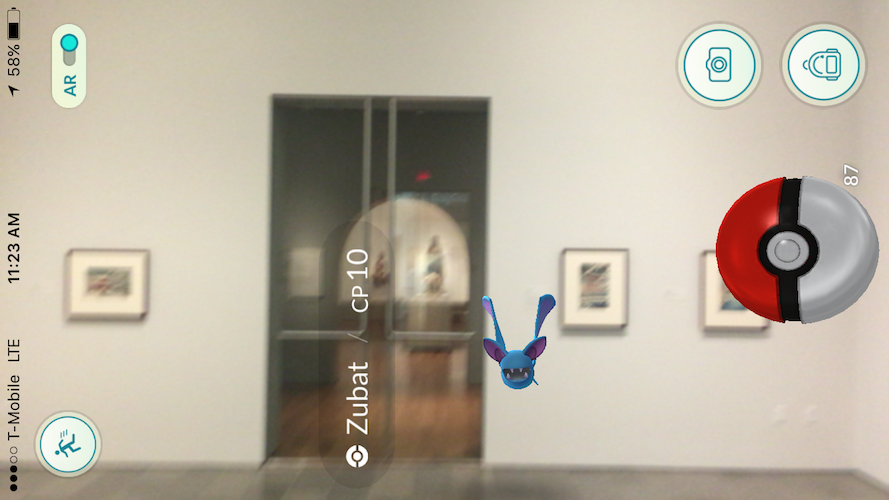 You can download Pokémon Go through your smart phone’s App store. And if you end up on our end of Monument, make sure you spin the coin (digitally) at our office’s Pokéstop in the Branch House!