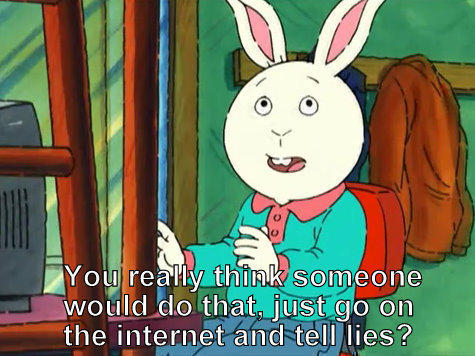 Is Norfolk’s mayor a member of the KKK? Or should you not believe everything you read on the internet

I know, it’s terrifying to imagine. People going onto the internet and making stuff up just to be an asshole.

I know, it’s terrifying to imagine. People going onto the internet and making stuff up just to be an asshole.

But it happens… all the time. (as illustrated by Buster Baxter below from the PBS show Arthur)

So when the hacktivist group Anonymous posted a list of Senators and other elected officials, including Norfolk’s Mayor Paul D. Fraim, who were supposedly part of the KKK, I was hesitant to believe the hype.

The leak, which can be seen here, is a shabby pastebin post with a list and some simple private info on each supposed KKK member. It certainly isn’t as coded as the Ashleigh Madison leak, nor does it really contain any evidence to suggest involvement with the hate group.

But that hasn’t stopped major news outlets from picking up the story and running with it.

The Editor over at Norfolk’s AltDaily, Jesse Scaccia, had an interesting perspective on the leak after he fell victim to some online-trolling when he ran for City Council a few years back.

“Anyone can try to ruin anyone in the Google age,” wrote Scaccia in a piece he published yesterday. “We all need to be aware of the role we play in these dangerous games.”

Check out Scaccia’s story below, and read the entire post here:

The situations aren’t perfect corollaries, but after I ran for Norfolk City Council I was nominated for school board. Members of the establishment were still bitter about my challenging their authority, so they enlisted Vice Mayor Anthony Burfoot to, essentially, call me a racist by citing a poem I wrote in grad school which he grossly–and I think disingenuously–misinterpreted. He called the paper, who called me for a quote. Bam. They ran something. It somewhat Internet blew up from there; The Huffington Post ran something.

And now–and forever–because some fool threw out some bullshit, my Google search will always be tarnished by the dark sides of the Internet and the news cycle.

It doesn’t help that the Anonymous group, Operation KKK (@Operation_KKK), claiming to have actual proof of high-ranking elected officials KKK involvement has already distanced themselves from yesterday’s leak (see tweet below), further calling into question the entire situation.

We respect the work of our fellow freedom fighters. However, we are unable to confirm, deny or take credit for any work that we did not do.

There’s some good work being done in the world of online data leaks, and if Operation KKK does come forward with some solid evidence of KKK connections at the highest level of government then more power to them. But until then, lets try and take things we read on the internet at face value (unless you read them here on RVAMag.com)