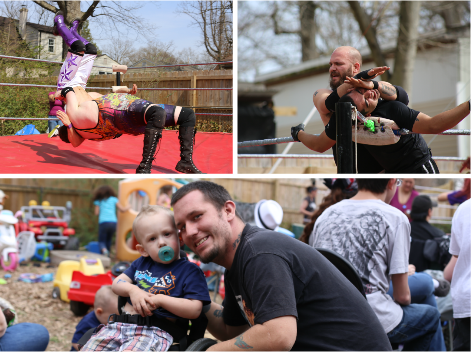 Kicking Ass For a Cause: RVA’s Backyard Wrestlers Raise Funds for Child in Need

Burried in Richmond’s South side neighborhood lies a sleeping giant.

Burried in Richmond’s South side neighborhood lies a sleeping giant. It has many heads, it swears, it lashes out at the society it yearns to be a part of, and throws itself into the sky from off the turn-buckle.

A close-knit group of entertainers and wrestlers from Richmond and the surrounding cities have gathered in the backyard of Matt Mackey’s house to put on a show, and it’s quite a show indeed with suplexes, ring dives, choke holds, and 540 spin kicks.

Their cause is just, Mackey’s son, Jaxon, needs surgery to treat a rare spinal defect. The condition limits the child’s mobility below the waist. He is unable to walk because of his abnormal growth. It has taken a toll on the family due to all the trips to hospitals in different parts of the country, let alone the financial burden.

Yet the Mackeys seemed determined to do whatever it takes to get Jaxon on his own two feet, even if that means a group of adults getting tossed around a makeshift ring for the screaming audience.

For Jaxon to be able to walk he is going to need extensive surgery and even more hospital trips. Mackey got his friends and family together to organize this charity event. “It’s fun for us, it’s fun for the kids and we just want to do what we can to improve Jaxon’s life,” said the proud father.

And what’s better than to have a bunch of friends come over for backyard wrestling. But this isn’t quite amateur hour. Mackey and his friends are trained pro wrestlers and his backyard is equipped with a full-sized wrestling ring. Mackey explained how he found the ring by a craigslist post and traveled up to Maryland to pick it up.

When my editor and I pulled up to the south side residence, there were about 10 motorcycles parked in the driveway. At first we weren’t sure if we came to the right place so we walked up to some guys standing out front wearing spandex, admittedly a tell.

With shaved heads, grizzled looks, and a number of perceiving and tattoos, they appeared a bit intimidating, but they were actually very welcoming.

We spoke to one of the wrestlers named “Anti.” He told us a little bit more about what we could expect. Anti came out to wrestle to support his buddy Matt and his son. In addition to letting us know about the fundraiser he talked a little about the wrestling that was about to take place.

Although Anti says it is based on WWE style of entertainment wrestling, he says “Its not fake, we’ve had plenty of people walk out with broken bones.” But he backs that up in saying that they’ve all been trained and that “Its worth it to us… as long as everyone’s having fun.”

After talking to Anti, we walked into the backyard to find a full-sized wrestling ring.

Kids were playing as the adults socialized and music blasted from a makeshift commentator box behind the folding chair rafters.

Off to the side there was a BBQ buffet where people were gathered waiting for the event to start.

The first two wrestlers were introduced and jumped into the ring. The referee took his stance and the bell was rung. The first thing I noticed was how acrobatic the wrestlers were as they climbed the ropes and dove onto on another. The crowd bantered back and forth as the two wrestlers grappled each other into submission.

After the first round I caught up with John Washington, one of the first wrestlers to perform that day. Unfortunately he lost to his rival Damon Andrews, but he was able to give me some insight as to how he prepares for a match.

“I Strive to be the best, go out there and give it my all,” Washington said. He seemed really dedicated to his craft so I asked him more on what it’s like training for this type of wrestling. He told me it could take hours or even days to master a new move.

After the first round I wondered what could possibly come next as the announcer introduced the next three wrestlers to get in the ring. Coheed and Cambria’s Welcome Home blasted over the speaker system as another wrestler, Reckless, emerged in skin-tight spandex.

Reckless, one of the day’s heals or enemies, picked a fight with the announcer when they cut his intro music short.

He climbed into the ring and the real fight was underway. It was a brutal 3 way match between the heavy-set Reckless and two other more fit combatants. Again, the action was fast paced and high-flying. The two smaller wrestlers worked together to lift the cumbersome Reckless in what could only be described as a mix of ballet and hobo-boxing.

It was impressive to say the least. These guys had obviously put some time into their craft.

Despite his aggressive demeanor in the ring, Reckless was very pleasant to speak with. He mentioned how he and a few of the other wrestlers had been traveling around doing shows together for a while. Their venues ranging from state fairs to what he described as a “Mexican restaurant Night club.” However this event has been the first time Reckless, Anti, Mackey and the other wrestlers had performed together in a few years.

“This is probably going to re-spark everyone’s interest in getting back in the ring…” said Reckless. “Once you get the itch its hard to quit.”

Showmanship is very important to this style of wrestling and these guys had it in spades.

The audience of Mackey’s friends and family yelled and cheered as I continued my conversation with Reckless. These wrestling matches are mostly improv but there is some planning involved.

Reckless detailed one match where he used a woman’s prosthetic leg as a prop against his opponent.

His opponents wife had the prosthesis and they agreed that at some point during the match he would exit the ring and use her leg in the fight. Reckless said in that show “the crowd went livid.”

One thing that was hard to miss was the motley crew of different wrestlers that showed up. It was a colorful cast of characters each with their own style and attitude.

One wrestler in particular, Courtney Prescott, describes his character as “In a word, Ignorant.” He went so far as to spray an audience member with bottled water. He even denied my initial request to speak with him, but eventually came around and we were able to talk a little about the event and what its like to be an entertainment wrestler.

“Realistically, safety is the biggest part of it, everyone wants to go back to work Monday,” Prescott said.

Prescott wasn’t the only wrestler to harp on the safety aspect of their craft. Wrestler Antoine Brittany said his only concern was knowing what his opponent was gonna do inside the ring.

“The opponent is putting his trust with your body. If you hurt him, then there’s no trust there,” Brittany said.

Talking to the wrestlers made it apparent they were very experienced and many of them even took training classes. In Antoine’s case he trained with members of NWA (National Wrestling Association), but his inspiration dates as far back as pro wrestling stars like Ric Flair.

This troupe of wrestlers seemed to have built up quite a bit of trust over the years judging by the high-flying moves and wrestling theatrics, but that doesn’t mean accidents don’t happen.

Wrestler John Martin left the ring scrambling for some peroxide while blood ran down the side of his face. “I caught 540 kick to the side of the head and didn’t protect myself,” he said with a half-smile.

His teeth clenched as he patted his head wound.

Although injured, Martin was in high spirits and was glad to see so many people come out for the cause.

Overall the fundraiser seemed to be a success and a big step forward for the Mackey family. They were able to raise over $1,000 in Jaxon’s name.

Hopefully the kid will be able to get the medical help he needs and Mackey’s wrestling friends can reunite for some shows.

For more information on how to donate to Jaxon’s cause check out their Facebook page for Jaxon and you can donate directly to their fundraiser page here.