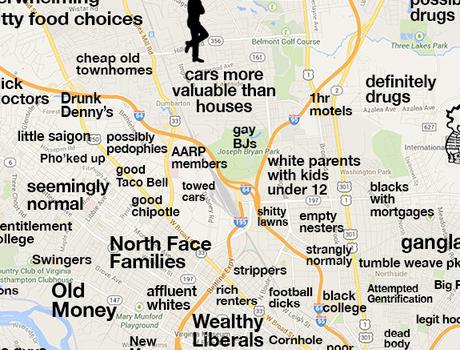 Let’s All Fight About This “Judgmental Map” Of RVA

We’re not exactly sure who’s behind the Judgmental Maps website, but their latest post has taken aim at none other than RVA.

We’re not exactly sure who’s behind the Judgmental Maps website, but their latest post has taken aim at none other than RVA. The map in question, credited to Ben Layman and Michael Wright, labels Richmond neighborhoods with such colorful epithets as “gay dads,” “wealthy liberals,” “poor republicans with guns,” and “gangland.” Interspersed throughout are smaller notations citing specific landmarks, such as “good Taco Bell,” “black college,” “football dicks,” and “vegans, tattoos, curly mustaches.”

True to its openly judgmental nature, this map is guaranteed to be polarizing. All of the notations on this map are going to land somewhere between “hilariously true,” “uncomfortably true,” and “frustratingly false” for everyone who looks at it. However, which notations will fall into which categories probably depends on the person reading it (I, for one, will totally vouch for the “good Taco Bell”). So I must ask–which of the designations provided by this Judgmental Map piss you off the most? Which ones crack you up the most? Tell us about it in the comments. And in order to get the full impact before you start ranting and raving, make sure you click the link below to see the hi-res version of the map, in all its glory.