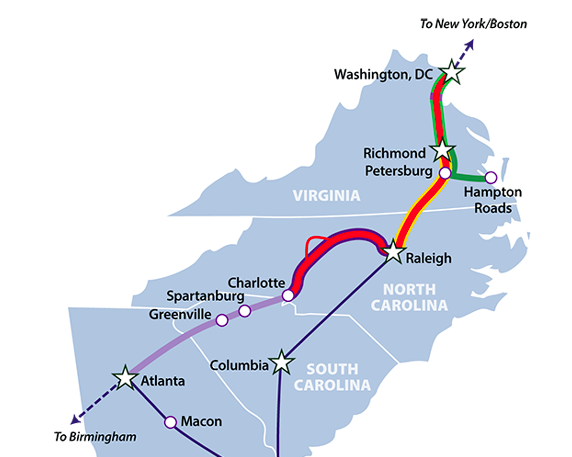 The Virginia Department of Rail and Public Transportation (DRPT) held a public information meeting at the DMV last Wednesday where they present their plans for a high-speed passenger rail project serving the Richmond to D.C. area.

“So far, we’ve gotten a lot of support for it,” says Project Manager Emily Stock. “Folks that are hoping it’ll happen sooner rather than later. And then there are also folks who are obviously concerned about their land if they’re very close to the CSX right of way.”

The CSX right of way is where existing tracks cut through Virginia. Amtrak passenager trains travel through public and private land on CSX, who handle freight and everything except people, owned tracks.

The rail is expected to traverse the 123-mile corridor along I-95 between Chesterfield and Arlington, from where you could take the Metro into D.C.

No formal presentation was given at the meeting, which was one of a three-part series of meetings held in Alexandria, Fredericksburg and Richmond.

Instead, a video slide show ran on loop and project team members stood with posters detailing their progress. Richmonders were invited to view the material and discuss their questions and concerns with the project team.

The project aims to include rail infrastructure improvements intended to improve travel time, service frequency and timeliness of passenger rails between Richmond and D.C.

Stock says the project hopes to improve the travel time and reliability of rail service by adding a third track system, among other changes.

“Our goal is to make incremental improvements throughout the corridor,” she said. “So eventually we will have better speeds, but also better reliability because trains will be able to pass each other more easily.”

Reliability is a concern for Richmonder Aaron Williams. Williams doesn’t own a car and already uses public transportation to get around the city.

“One of the biggest troubles of not owning a car is regional travel,” he said. “So better, more frequent, rail service to DC, to Newport news, to central North Carolina, would benefit me greatly.”

Possible benefits to Richmond go beyond easing the commute. Stock sees the possibility of job opportunities expanding to the north and south for Richmond residents.

The project would also bring D.C. residents who may not normally make the trip to Richmond to easily visit the city for events like River Rock and the annual Richmond Folk Festival.

The DC to Richmond project is part of a larger planned Southeast High Speed Rail (SEHSR) corridor planned to connect D.C. to Jacksonville, Fla. This segment will link the SEHSR corridor to the Northeast Corridor which travels to Boston.

DRPT hopes to hear public opinion on where the rail should stop in Richmond. Possible locations include stations on Main Street, Boulevard and Broad or Staples Mill Road.

Richmonder Bernice Baker came out to the meeting because of her questions concerning how the project will impact existing infrastructure in the region. “I’m wondering if we’ve got a high speed rail, will we do away with [Amtrak services], or will it supplement?”

She was also looking for information on how the project will impact the neighborhoods and the environment along the corridor and how quickly the new rail could get her to D.C.

“I think it’s better for our country for people to have access to public transit and not [need] to have an independent mode,” Baker said.

The public is encouraged to submit comments using the interactive comment form on the project website at here.

Topics: high speed rail in RVA, RVA to DC by train, SEHSR, The Virginia Department of Rail and Public Transportation