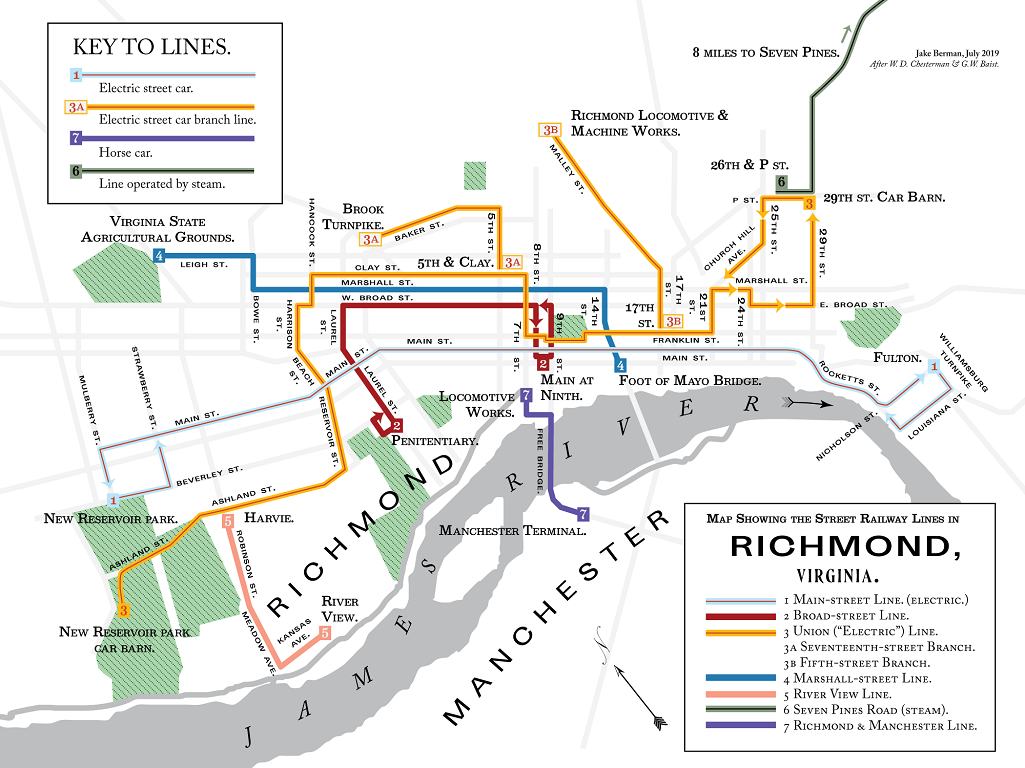 Artist Jake Berman has been creating maps of bygone streetcar systems around the US. Now he’s turned his focus onto the first electric streetcar system ever, which opened right here in Richmond in 1888.

Believe it or not, there used to be a way to get around Richmond that didn’t involve struggling to find an opportunity to turn left off of Broad or dealing with drivers who don’t want to share the road with bicycles. Jake Berman, an artist from New York, drew a map of Richmond’s old streetcar system, showing how Richmonders at the turn of the 20th century made their way around town.

Berman, who has made a project out of mapping the country’s old transit systems, was inspired while sitting in traffic. “I was living in LA at the time and I was stuck in a traffic jam,” Berman said. “I was frustrated and started thinking, why can’t I take a train to work?”

After going down a rabbit-hole of research, Berman discovered that, like Richmond, Los Angeles was once home to a successful electric rail system. Interested in this mode of transportation that no longer exists in many places around America, Berman started working on a collection of sleek maps that depict historic transit lines in several cities.

When designing his maps, Berman researches fonts and commercial ads that were used at the time the streetcars were being used. This gives viewers the feeling that they are viewing a transit map straight out of the early 20th century.

”What I’m trying to capture is a certain snapshot of a city at a particular time,” Berman said. “There are lots of streets on my Richmond map that don’t exist anymore, because they’ve been demolished or re-routed. There are landmarks that would have been very recognizable to someone a long time ago, but nowadays that’s just not the case.”

Sites such as Virginia State Penitentiary, the Locomotive Works, and the Virginia State Agricultural Grounds figure prominently on the map. While these sites are often overlooked today, Berman’s map helps to shine light on a history that is usually forgotten.

The Richmond Planet estimated that upwards of 80% of Richmond’s black population participated in the boycott. The Virginia Passenger and Power Company, which operated the streetcars, declared bankruptcy within the first three months of the boycott.

Although stricter segregation laws were passed in the years after 1904, the boycott is remembered as an important and crucial aspect of Richmond’s struggle for civil rights.

Richmond’s streetcars came to a halt in 1949. The streetcars were dramatically burned, signaling the end of rapid transit in Richmond until the introduction of the GRTC Pulse bus route in 2018. Richmond was not the only city to say goodbye to streetcars after World War II; in fact, many cities throughout the US also shut down their streetcar systems in the late 1940s.

It seems that these days we are doomed to a world devoid of light rail systems. Berman doesn’t anticipate this changing anytime soon. “I think that for now the United States is going to be a place mostly for driving,” he said, noting that most Americans live in the suburbs today. “Most of the suburbs that were built after WWII are just unnavigable unless you have a car.”

“Things could be different. Transportation infrastructure wasn’t handed down on Mt. Sinai,” Berman said. “If people are lamenting the fact that they’re stuck in traffic, or if they have to go five miles to find the nearest grocery store, then people should think about why that is. It doesn’t have to be like this.”

Regardless of how you get around, Berman’s maps provide a beautiful visual aid for imagining a future in which everyone has more options for navigating throughout the city. Check out a full-size version of Berman’s map on Reddit here. 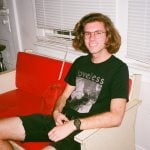