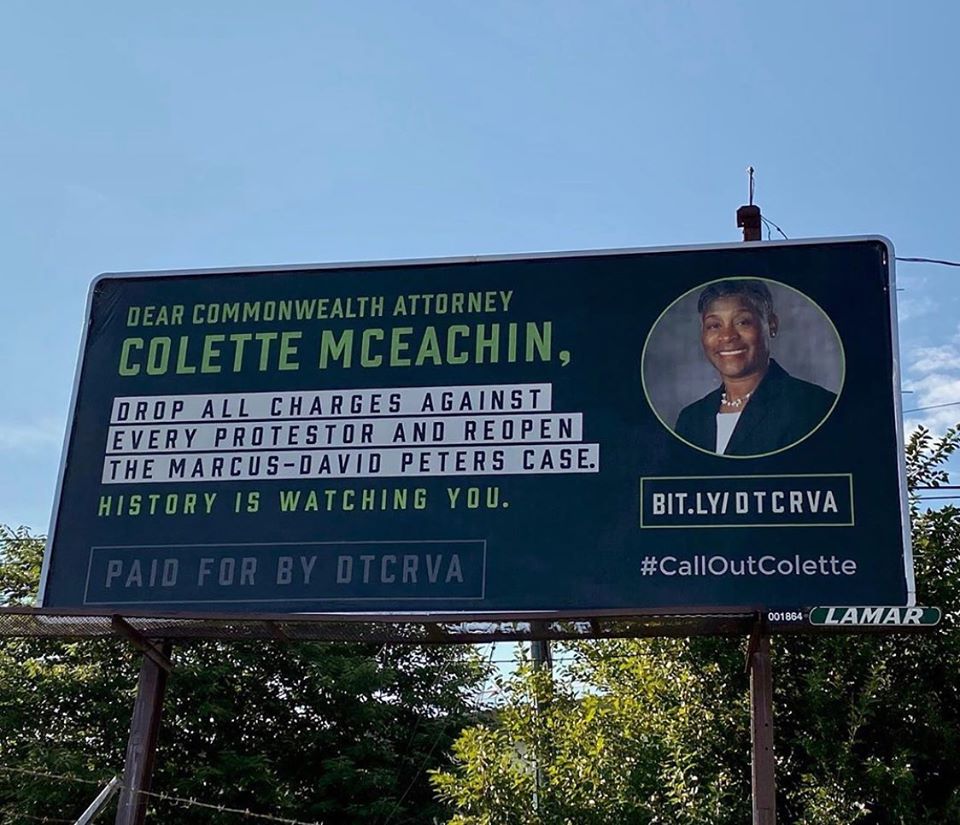 A variety of advocacy groups around Richmond are calling for Commonwealth Attorney Colette McEachin to drop all charges filed against participants in recent Black Lives Matter protests. One group has even posted a billboard.

Driving to the Richmond City Jail, you can hardly miss Commonwealth Attorney Colette McEachin’s face. It’s plastered on a billboard overlooking Oliver Hill Way, and it is not in favor of McEachin’s work as an attorney. Instead, it serves as a demand that she drop all charges against the hundreds of individuals who’ve been arrested and charged with crimes during the recent protests in Richmond. It also asks that she reopen the Marcus-Davis Peters case.

The billboard was paid for by Drop The Charges RVA, a small group of individuals with experience in advertising and communications; it was funded through anonymous donations. DTCRVA leadership said the billboard was made possible by the groundwork done by Nolef Turns, SONG (Southerners On New Ground), the Richmond Community Bail Fund, and other activist groups in the area.

“We are just using our skills to amplify the voices of those doing the groundwork,” a DTCRVA leadership member said in a text message.

Charges facing individuals arrested during the wave of Black Lives Matter protests over the past few months range from misdemeanors that include violating the 8 PM curfew set in the first few days of the protests, to more serious charges such as disturbing the peace and assault of an officer.

Nolef Turns, a local organization dedicated to helping individuals who’ve been charged with a crime get back on their feet, has been working to get charges expunged for those arrested for protest-related offenses since the protests started in late May.

Though Nolef Turns is committed to helping those who have been convicted, the goal where protest-related crimes are concerned is to hopefully avoid a conviction altogether. In Virginia, the state background check includes one’s arrest record, not just their conviction record. This is why getting the charges dropped altogether is vital, according to Nolef Turns Executive Director Sheba Williams, because the process of getting arrest records expunged is a long, drawn-out procedure that someone standing up for social justice shouldn’t have to go through.

“The only people who are eligible for an expungement today are non-convictions. So you go through the process of the court, you pay your bond, you pay for an attorney, you take time off of work to go to court. Then you’re not convicted, but you still have this thing on your background check,” Williams said. “You have to go before the court where you got this charge to request that they expunge it from your record, and that’s the part that we do.”

SONG, a local organization calling for LGBTQ liberation among all races, ethnicities, religions, and backgrounds, has also been fighting to get the charges against protestors dropped, organizing protests of their own and calling on McEachin to drop the charges.

A frustrating part about this particular mission, according to Rebecca Keel, a statewide organizer for SONG, is that McEachin has said numerous times that she will not listen to demands of her constituents. In Keel’s opinion, it’s the responsibility of elected officials to listen to the people they represent.

“I personally voted for Colette McEachin, so I’d like to be listened to by her, but she is refusing to do so,” they said. “I think that that’s a big indicator that a politician is not ready to serve a community, but rather ready to continue to serve laws that do not work. Colette McEachin is serving systems of oppression, rather than her constituents.”

Among those who were arrested and are also calling on McEachin to drop the charges is the group RVA26. RVA26 is a group of individuals of varying races and backgrounds who were part of the 233 people arrested on one of the first nights of protesting, according to group member Marwa Eltaib.

The group name actually originated from the first 26 individuals who were arrested and held on a jail bus that night for “eight or nine hours.” Those 26 people, joined by many others as the night went on, all experienced different outcomes, as some were able to go home after they were released from the bus. while others were kept overnight and into the next day. Eltaib was one of the latter: arrested, crammed into a bus with others in defiance of social distancing guidelines, strip-searched, and left in a jail cell. While there, she says she witnessed what she called “traumatizing” events, including people screaming for medical help or having mental breakdowns.

Eltaib said despite being handcuffed, watching people’s hands turn black and blue from the restraints of handcuffs and zip ties, and not getting a phone call during her booking, she still has gratitude for part of the experience — that the white people who were present were using their privilege for good, and standing by the protesters of color.

“The people that were arrested were more disproportionately Black and brown people, but we still had a good amount of white allies with us that were vocal,” Eltaib said. “It was very traumatizing and horrible, but even still, we were in so much privilege knowing that our community was surrounding us and that we had legal representatives on the outside. And I knew that we had people looking for us and waiting.”

Using their experience to help those who are now getting arrested and facing the same treatment and battles as they once did, members of RVA26 are attempting to build relationships with those currently incarcerated.

“It gets very lonely, and overall mentally,and spiritually draining, being stuck in those jails,” Eltaib said. “So being able to be a level of support for people that are still incarcerated, and then raise funds for that, is what we’re trying to do.”

Richmond Community Bail Fund (RCBF), an organization which supports those who are incarcerated by helping to raise funds for those who can’t afford bail, has focused on protest-related charges in recent months. They too are calling on McEachin to drop the charges against protesters.

RCBF has been around since the spring of 2017, said Luca Connolly, co-director of the organization. Since the protest began, members of the group have passed out flyers at the protests with the organization’s emergency number on them, so individuals who get arrested can call RCBF for help when they get their one phone call.

“There’s usually a hotline volunteer who’s [asking protesters], ‘Do you have the support hotline?’’’ Connolly said. “It’s great now because everybody’s like, ‘Yeah, I have it.’ That feels good. I have met people who have it tattooed on their body, and somebody projected it onto the monument in Marcus-David Peters Circle. You need to be prepared for the worst.”

The organization also builds relationships with those incarcerated, providing support with legal fees, legal advice, child support assistance, clean clothes, and rides home. Connolly said there’s also a hotline number that people can call if they’re calling from outside a jail, which helps provide support for those whose loved ones have been arrested.

RCBF is financed through 100% grassroots fundraising said Connolly, meaning they take no money from foundations or big corporations. She also said they primarily ask for money from white people and people of wealth.

“We kind of understand our work as a reparations-based framework, moving white wealth to liberate black people who are experiencing mass incarceration or police violence,” Connolly said.

Discussing protest-related charges in an interview with RVA Magazine last month, McEachin said she would look at the cases on a case-by-case basis instead of dropping the charges of all protesters as a group, which is what these various organizations are pleading her to do.

“There’s not going to be a general review. It’s a very individualized review, which is what I would think people would want if they were charged,” McEachin said. “Given what I know now, I think there will be some charges left at the end of my review.”

Protesters are facing an array of charges, some of which may sound worse than others. However, Connolly feels that it’s important not to separate the fate of individuals based on what they’re being charged with.

“We are asking Colette McEachin to drop all charges against all protesters,” she said. “No one should experience prosecution for exercising their first amendment right to protest.”