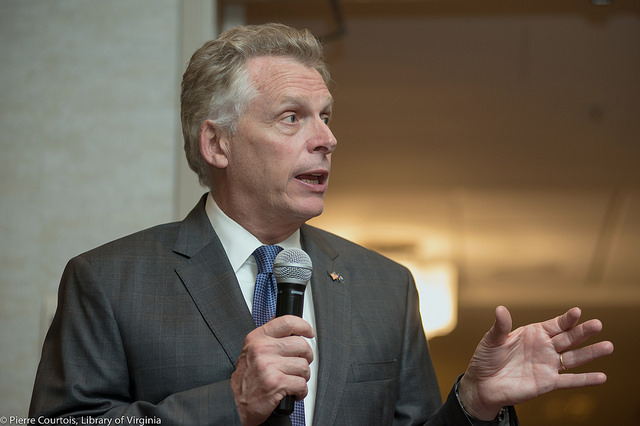 Gov. Terry McAuliffe has vetoed Republican legislation preventing local governments from raising the minimum wage, an issue that has been debated across the country.

Gov. Terry McAuliffe has vetoed Republican legislation preventing local governments from raising the minimum wage, an issue that has been debated across the country.

McAuliffe last month vetoed House Bill 1371, which states, “A locality shall not enact by ordinance, resolution, or otherwise any policy that requires an employer within the locality to provide an employee with a wage or employment benefit that exceeds the requirements of state or federal law. Any such local policy shall be unenforceable.”

“This legislation attempts to restrict wage growth and impedes future labor agreements,” the Democratic governor said in his veto message. “Virginia’s efforts should be focused on increasing wages, which will improve the lives of our families and aid our efforts to build a new Virginia economy, rather than placing artificial restrictions on their future growth.”
The General Assembly will reconvene on April 20 to consider overriding this and more than 30 other vetoes issued by McAuliffe. It takes a two-thirds majority in both the House and Senate to override a veto.

That is unlikely to happen with HB 1371, which easily passed the House, 65-34, but barely cleared the Senate, 21-19. Both votes were along party lines.

Democrats generally favor raising the minimum wage. The Democratic governors and legislators in California and New York recently approved bills to raise the minimum wage there eventually to $15 an hour.

Twenty-nine states and the District of Columbia have set their minimum wage above the federal level of $7.25 per hour, according to the National Employment Law Project, which supports a higher minimum wage. Virginia adheres to the federal minimum wage.

On Thursday, advocates for raising the minimum wage are planning to protest at 300 locations worldwide, including in Richmond, to demand $15 an hour.

“Fast-food workers will go on strike in Richmond and join local home care and child care workers for a massive protest,” according to the advocacy group Progress Virginia.

Many business groups have opposed increasing the minimum wage, saying it would cause higher prices. Measures preventing local governments from raising the minimum wage are popular with both multinational corporations and small business owners across the country. Oklahoma enacted such a law in 2014.

Virginia is a “Dillon Rule” state, meaning localities can do only what the state government gives them permission to do. This legal principle keeps policies standard across the commonwealth and makes it easier for businesses to operate, said Del. Jackson Miller, R-Manassas. He is the chief sponsor of HB 1371.

“This bill prevents different localities from having different requirements,” Miller said. “The less red tape you give them, the easier it is to do business.”

Opponents of HB 1371 say it would keep people in poverty.

“This bill systemically prevents localities from choosing to pay workers enough so they can raise their families with dignity,” said Anna Scholl, executive director of Progress Virginia.
McAuliffe agreed. In his veto message, he said, “A number of localities have enacted wage policies designed to allow the employees of contractors performing services for those localities to generate enough income to allow them to live and raise a family in the area. Companies not inclined to participate at these wage levels need not contract with the localities. House Bill 1371 would undermine these laudable policies to no apparent advantage.”
Miller said he doesn’t oppose a higher minimum wage. But he wants to wait for the federal government to raise it.

“By sticking with the federal requirements, we’re helping the pro-business environment we have here in the commonwealth,” Miller said.

During the past legislative session, Democratic lawmakers introduced three Senate bills and five House bills to raise the minimum wage; all were killed in committee.