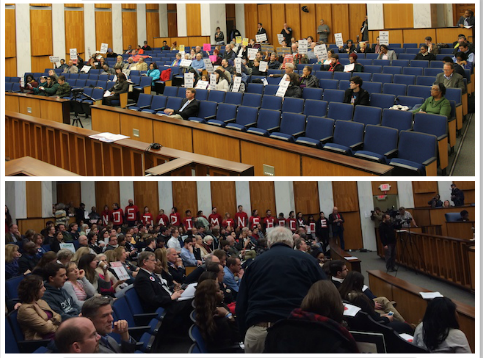 Monday’s City Council meeting was seemingly the most divided Richmond’s been since 1865.

Monday’s City Council meeting was seemingly the most divided Richmond’s been since 1865.

People of all ages, races, and districts of Richmond went to the podium to give their take on the Mayor’s Revitalize RVA project. Any concerns anyone had that the issue was falling along racial lines got squashed Monday as Councilmen Hilbert and Baliles and Councilwoman Graziano joined the ‘yeas’ on what had previously racially divided vote. But the outrage on both sides from the public was still visible.

Public attendance in City Hall had been slowly increasing for weeks, but when a resolution which expressed the council’s support for Mayor Jones’ project showed up on the meeting agenda, our dear elected officials staring back at a packed house.

A filibuster-esque public comment period followed. The picket signs were bigger, the voices were louder, and the bags under everyone’s eyes were darker. For over three hours dozens of citizens spoke.

Attitudes became a bit uncouth. Those at the podium got interrupted by the crowd. An anti-stadium protester spoke in favor completely sarcastically (only to be dismissed by Samuels). Pro-stadium speakers were called yuppies. Samuels sounded like an elementary school teacher, and jokingly claimed he’d “turn this building around and go home!” if citizens didn’t begin showing one another respect.

Maybe delirium began to set in, but all in attendance began to speak more candidly as the hours came and went, including Councilwoman Michelle Mosby.

“I’ve heard a few things which were said where slavery should be the main focus… There are no signs in here that say ‘Slavery First.’ Everything in here talks about the stadium. So that’s amazing, that that’s the only thing that’s being said,” said Mosby.

“I remember riding down Main Street, I believe. And on the side of a building, there was a portrait of President Obama as The Joker,” she continued. “I don’t remember a whole lot of rigmarole about taking that down. Nobody said, ‘This is so close to our historical site.’ He stayed up there until something happened with the business owner, and then it was taken down. But there was not this room full of people about it being so close to our heritage, and it was a disgrace.”

Mosby’s point, albeit emotional, is valid. Shockoe Stadium has become a bit of a scapegoat for the project, and those opposed don’t mention the planned slavery heritage museum, supermarket, parking decks, and apartments which would also be coming to the Bottom.

“It’s only until it affects us personally that it becomes an issue. Nobody came down to say, ‘Let’s work on rapid transportation.’ Because people are jobless. Somehow, somewhere in there, we’ve got to be our brother’s keeper,” Mosby said.

Mosby voted in favor of the resolution, and President Samuels voted against it. But despite their disagreement, Mosby’s passionate disposition was echoed by Samuels later on, when he said, “We can do better than what’s in the Boulevard and what’s in the Bottom right now.”

The City Council, despite how they may feel about Revitalize RVA, really appears as if they want to make the Bottom a better place one way or another. The difficult part is figuring out how.

People are getting out of their homes and into City Hall. In previous meetings where the stadium had been discussed, there were maybe 30 people. Monday had more than 400.

To state the obvious, it’ll be difficult to craft a plan which pleases everyone. Citizens have ideas on how to bolster the Bottom, as does the Council, as do business owners, as does Mayor Jones.

And while it’s Mayor Jones’ plan which is currently being considered, it’ll always be difficult to predict if any plan will blend with all the stakeholders in Richmond. The rapid spike in public input could be an indicator that a popular vote might be the way to settle this.