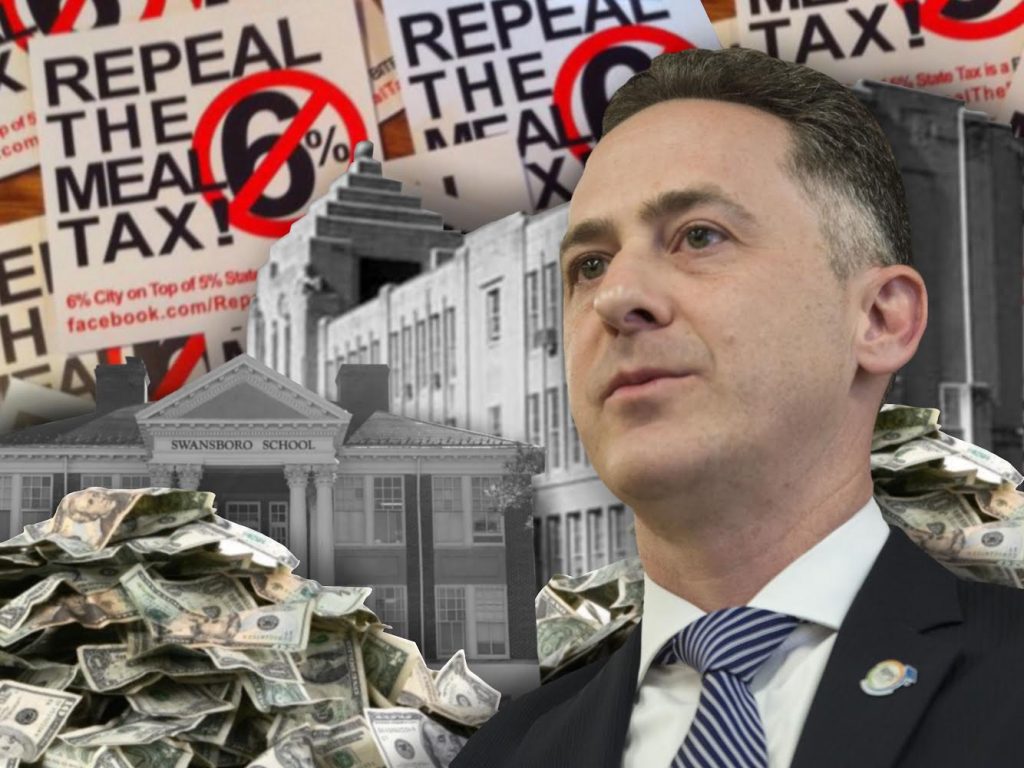 Two months ago, students, parents, and teachers mobilized to support an increase in Richmond’s meals tax in support of much-needed renovations for the aging infrastructure of Richmond Public Schools. Mayor Levar Stoney proposed the plan in response to the overwhelming city-wide vote to prioritize school facilities.

Parents called their city council representatives while teachers and students shared stories of what it meant to schools so long neglected. The meals tax was an insufficient but necessary measure, and to the mayor’s credit, he campaigned for it hard after its initial proposal. As the vote neared, the RPS community had to face down a hoard of arguments commonly used to defund schools: The funds are mismanaged, our government is bloated, and there is waste that could be cut. Very quickly it became clear that this was not simply a conversation about the cost of a dinner out.

Rather than a straightforward conversation about funding allocation for public services, the meals tax vote was a touchstone for Richmond’s long history of racialized disenfranchisement at the hands of private interests. Robustly funded democratic government and public schools in particular benefit Richmond’s majority-black working class, people who cannot afford to send their kids to private schools and who benefit from public jobs where democratic oversight protects against discrimination and offers more sustainable employment.

City Councilpersons with the more affluent and white constituencies were the slowest to come around on the meals tax, if they did at all. Both online and in public comments at city council, speakers dispensed with euphemisms and drew explicitly racist caricatures. The conversation illustrated the worst of dog-whistle politics. In a sector that employs black Richmonders we heard about “waste” and the need to “cut fat.” In a sector historically managed by a black administration and a predominantly black school board we heard about “mismanagement.”

These arguments are anchored in racism, but by presenting themselves as race-neutral, they give cover to political leaders. By appealing to legitimate concerns, which are usually created by the starvation of the public sector, they gain traction among broader swaths of people even among people who are committed anti-racists. Corporate interests have attacked democratic government because they want to rule unilaterally, and they don’t want the check on their power or profits represented by majority will. However, they’ve been successful in winning the defunding of democratic government, public institutions that are left are starved of their ability to be responsive, and that makes it advantageous terrain to further discredit government.

While racists and those influenced by racist messaging were a big part of the opposition to the meals tax, they were not alone. There was also progressives, including grassroots African-American activists, who pointed out that the city budget has historically favored corporate giveaways and who believed priority should be placed on eliminating those before diners were asked to pay more. These progressives argued that they supported fully funding schools, but they begged us to remember what happened with the last meals tax. Were they right? Will the new meals tax fund schools, or will it simply increase the flow of money to corporate interests in Richmond?

In 2003, City Council raised the city’s tax on meals from 5 to 6 percent to help pay for the privately owned CenterStage Theatre, later renamed Dominion Energy Center. The project’s board of directors included the corporate elites of Richmond, who’ve been made powerful through a steady stream of calculated political donations. Activists at the time protested, feeling the public subsidy was a result of undue influence and not what was best for the city. However, the board, including power-players like Jim Ukrop and chaired by Dominion CEO Tom Farrell, pressed on. Tens of millions of public dollars went to the project in initial investment and ongoing operations subsidy.

The activists’ concerns proved well-founded. Many members of the public could not afford tickets to the venue they subsidized, and in 2014, they had to pay more, when project managers asked for additional funds to pay for delinquent real estate taxes on the property.

As Richmond struggles to raise money to fund school maintenance, enter Jason Kamras, Richmond’s new superintendent and the highest paid in our history. Kamras recently proposed hiring five of his former colleagues from D.C. Public Schools at individual salaries of $180,000 per year. That’s close to $70,000 per year more than their respective predecessors, and tens of thousands more than they made in D.C.

Public education advocates and other activists objected, but much like the Dominion Energy Center, Kamras is a project of Richmond’s corporate elite. The search committee which recruited Kamras also included Ukrop and was also chaired by Dominion CEO Farrell. The committee openly opposed public engagement, its corporate members acting without the public interest at heart. Similar to the public being asked to subsidize a venue they can’t afford to attend, the public is now subsidizing a Kamras cabinet, which pays four to five times the earnings of the median Richmonder, while sending our kids to schools that don’t have the resources to meet their basic needs.

In a narrow vote on March 19, the school board accepted Kamras’ new cabinet 5-4. Third District school board member Kenya Gibson released a statement in the lead up to the meeting expressing opposition:

“…The existence of high central office salaries in cash-strapped urban school systems is not unique to Richmond. In Detroit, administrative salaries were among the highest in the nation, while the system was on the brink of bankruptcy. In Philadelphia, a student died in a school lacking a full-time nurse while the system employed a medical consultant earning a three figure salary. These cities suffered from a top-down approach that heaped resources on a small number of administrators, leaving students, parents, and teachers without what they needed to be successful. We cannot repeat those mistakes here…”

During the school board meeting, many representatives tried to avoid discussing the pay rates of the new cabinet in open session. Kamras suggested he wouldn’t know how to talk about the matter in open session, and Page implied that it was inappropriate to discuss pay rates, seemingly backed up by the lawyer for the school board. Salary ranges are, as a matter of standard practice, included in job postings. The unwillingness to discuss them, in this case, was not due to legal mandate; rather it can only be understood as trying to protect Board members from having to publicly discuss a very unpopular vote.

Public education advocates want more funding in order to meet the needs of students and educators. We do not want more resources to go to pay exorbitant salaries at the top. Even worse than this particular misuse of funds is the perception it presents to the public. Many will assume if this type of greed and poor prioritization is allowed for at the top, then it must be throughout the school system.

Don Harrison, a Richmond journalist and progressive thought-leader who had opposed the meals tax weighed in the next day with a Facebook post:

“The Betsy DeVos-ization of Richmond Public Schools begins. So tell me again why we needed to raise the meals tax? So that these outsiders — including some who are leaving D.C. schools in disgrace — can draw exorbitant, record-setting salaries?”

Kamras and the school board majority did a supreme disservice to our schools by playing into the arguments used against funding. It only took a day before the Richmond Times-Dispatch, a strong mouthpiece of the idea that democratic government is synonymous with “waste,” published “The Gravy train pulls up to RPS.” Rather than offering a nuanced critique of the corporate takeover of our schools the article vilified schools wholesale, arguing not for a more democratic distribution of funds, but against public investment altogether.

A week after the school board vote, Richmond City Council unanimously passed a motion to establish a city-led audit of Richmond Public Schools. As a policy, it offers the public more of the same: Undue scrutiny is placed on public services buckling under the weight of overburdening and underfunding. More than policy it was political theater, performed for Richmond’s corporate donor class and at the expense of Richmond’s majority black student population, teachers, and support staff. It’s heartbreaking to see that it remains good politics to attack our schools when they need support; it’s also a reminder of who has a voice in our city and who does not. Echoing the wishes of the donor class, the Times-Dispatch quickly followed with a new editorial, “Time for an audit of the Richmond Public Schools” which criticizes Stoney for arguing that school funding will, in fact, require additional revenue.

As the narratives surrounding our school play out it is clear that neither Kamras nor his cabinet members will bear the burden of the backlash against gratuitous pay. It will be RPS students, parents, teachers, and support staff who will pay that price. It’s a win-win for Richmond’s corporate interests. They install their political representatives, who in turn misuse public funds, and when that misuse results in loss of faith in government, corporations and corporatizing administrators benefit.

Kamras has argued that these salaries are justified in order to attract the highest quality talent. But many Richmonders will find it hard to believe that the best candidates for these positions, the people who truly have RPS at heart, would take excessive salaries from such a starved school district. When corporate leaders like Ukrop and Dominion’s Farrell have undue say in the use and allocation of public funds, we get results that no democratic process would ever choose.  Kamras, in his opening gambit, plowing through democratic processes, in order to secure gratuitous pay is disappointing, but the fact that our political leadership didn’t stop him is shameful.

Gary Broderick is a candidate for school board in Richmond's 7th District. He's a community organizer who has worked with parents and teachers in Richmond, a former Learning Assistant at Eastway Elementary in Durham, NC, and a former organizer with the Durham Association of Educators. He began his Public Education activism after the City of Philadelphia announced it was going to close 23 schools. With 18 other concerned citizens, he participated in civil disobedience to prevent the closings. He also played a leadership role in the teacher-led #StudentsDeserveMore march demanding more funding for NC Schools from then Republican Governor, Pat McCrory.