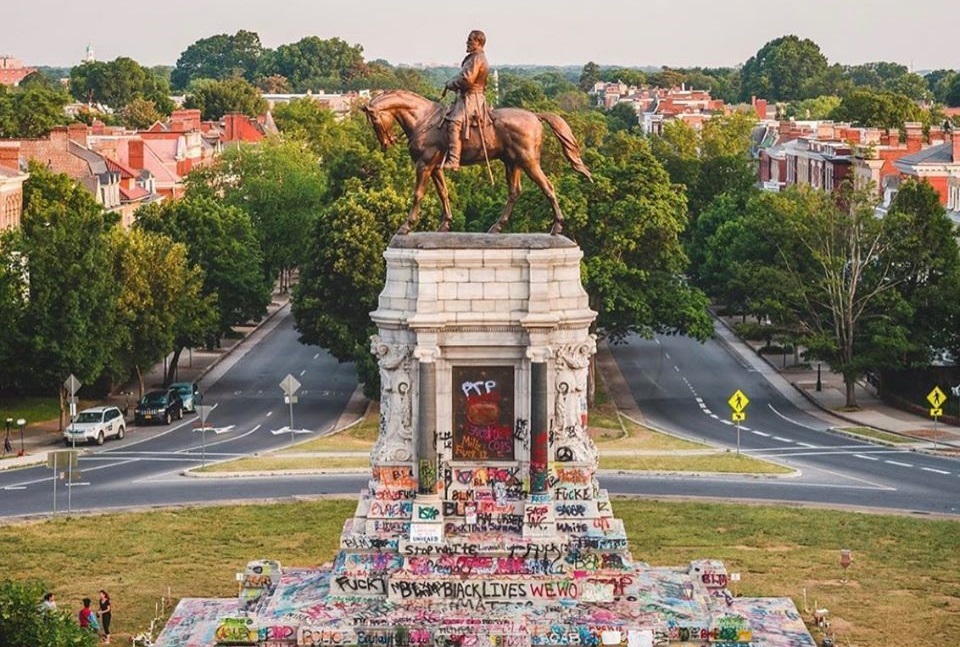 Monument Avenue’s Confederate monuments are slated for removal, but landscape architect Annie Lynch raises a more fundamental question: when they are gone, what will we do with their pedestals?

An empty pedestal signals either an ending or a beginning.

Earlier this month, Governor Ralph Northam announced that the statue of Confederate general Robert E. Lee that presides over Monument Avenue will be removed. In his announcement, the Governor acknowledged that the future location of Lee’s statue will be the subject of community engagement efforts and public debate in the coming months. While the removal is currently the subject of multiple lawsuits, the state government continues to work toward the eventual removal of the statue. The fate of Lee’s vacated pedestal, however, was not addressed.

Recognizing that pedestals serve as city infrastructure is central to appreciating how Confederate monuments function in public space. Lee’s massive, sculpted base cannot be functionally distinguished from the form of the traffic roundabout; this merger is designed to blur the extent of the monument and cement this figure as immovable, like the road itself.

Drivers trying to access downtown Richmond or the interstate are funneled around Lee’s imposing pedestal, a design that ensures that the monument effectively dictates the city’s movement. As essential transportation infrastructure, citizens are unable to avoid, challenge, or change the monument and, by association, its ideology.

We must recognize that the removal of the statue does not constitute the removal of the monument. An empty pedestal serves only to remind us that the figurative statue is but one component of a larger spatial system, designed to elevate a single historic narrative and obscure those that would counter it.

On Monument Avenue, to stop at the removal of the monument figure may be missing an opportunity to refute the terms set by those designers, planners, and government agents who used these monuments to reinforce racial terror. Repopulating emptied pedestals with figures worthy of memorialization can address the underrepresentation of the city’s Black leaders in public space; the obvious merits of this approach have led to its adoption in many Southern cities.

Deconstructing the pedestal, however, offers a more thorough rebuke of the Confederate project. After the pedestal’s deconstruction, many may exclaim in frustration: “But the removal is not complete; the traffic circle remains!” Indeed, if we see the remaining circular patch of grass designed to support Lee’s monument as a critical component of a nefarious city-planning strategy, our site of work must expand to include the whole of Richmond.

Beginning with the deconstruction of the pedestal, the city could author an expansive definition of monumentality and memorialization that critiques broad historical narratives, honors and amplifies local forms of memory practice, and elevates the memorial qualities of lived, everyday experience.  Strategies that set a precedent for an expanded monumentality can be found in some of Richmond’s completed and ongoing projects.

The excavation of Lumpkin’s Slave Jail in Shockoe Bottom, begun in 2005, serves as a particularly apt example of how erasure can be countered through the deconstruction of urban infrastructure. Richmond’s Slave Trail also recovers the geography of the city’s suppressed history through the creation of a network of sites that, together, constitute a living memorial to the enslaved persons brought to the nation’s largest slave port. These methods of deconstruction, recovery, and dispersal could be leveraged in Richmond’s historically Black communities such as Jackson Ward, Oregon Hill, and Carver Residential, many of which have been severely harmed by Richmond’s recent infrastructure projects.

Widespread excavations that rely on community involvement and landscape design could build off of the existing network of discovery, remembrance, and celebration of Black life in Richmond. Monument Avenue, once stripped of its pedestals, could be reconstructed to play a role in these efforts, as a site for display of excavated soil and artifacts from sites throughout the city.

For decades, the design and planning disciplines have been complicit in constructing the physical environment of racism. The removal of Confederate monuments, redefined as a city-wide project, calls upon designers and planners to work with Black communities to create a new memorial landscape that excavates obliterated spaces, and with them silenced histories.

The strategy I outline seizes upon the city and state’s renewed sense of urgency regarding Confederate monument removal and leverages it towards a more fundamental reimagining of the city’s infrastructure of memory. How might we begin to rewrite the history of Richmond without the use of pedestals and plaques? As we celebrate the remarkable progress the removal of Monument Avenue’s Confederate statues represents, we must challenge ourselves to understand this moment as only the beginning.

Annie Lynch is a landscape architect from New York City. Annie’s design work focuses on sites of memory and contested history within the context of restorative justice movements. She is a designer with the landscape architecture firm Studio Zewde.