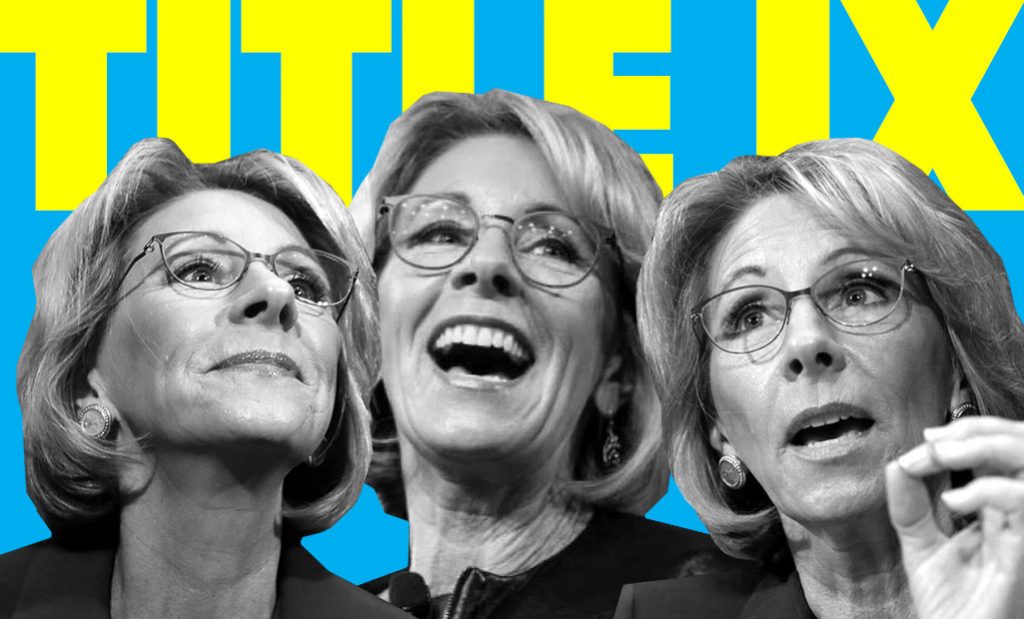 Education Secretary Betsy DeVos announced that the Department of Education would be reviewing campus sexual assault guidelines passed by the during the Obama Presidency. She stated, among other things, that “through intimidation and coercion, the failed system has clearly pushed schools to overreach…the sad reality is that Lady Justice is not blind on campuses today.”

There was, of course, an immediate and expected uproar from the left.

In fact, my initial instinct was also to be angry — just because it was Betsy DeVos. My general loathing of her charter school policy and support of President Trump, who is shaping up to be the main antagonist of my 20s, makes me want to disagree with just about everything she says.

So why do I find myself saying, weirdly, that I agree with DeVos on this issue?

While I consider myself far, far, to the left, it is also important to be able to see both sides of a story — especially in politics, and especially when lives are hanging in the balance.

It’s true that the Obama-era guidelines encouraged universities and colleges to take sexual violence seriously, when in truth, most were not. As a woman, I have experienced in my lifetime the negative stigma surrounding sexual assault, and the gradual shift in attitude to a more accepting society over the last few years.

But at the same time, the rules were ultimately flawed. An easy example of this is the potential loss of federal funding. If schools don’t take sexual assault allegations seriously, they lose it. Pretty simple, and a fitting punishment until you think about its implications on college campuses.

The flaw here is that this Obama-era legislation expects colleges and universities to fully and properly persecute sexual assault cases out of fear — rather than an inherent desire for justice or empathy. I can point to countless examples of systems implemented under terms of fear,  notorious for their extremity and lack of tolerance or mercy. The government’s actions during the aftermath of 9/11, for one, and the subsequent increase in xenophobia and Islamophobia that is still alive today.

American educational institutions replied to these stricter guidelines as those frightened of losing federal funding often do – by overcompensating. A recent article written by Emily Yoffe of The Atlantic highlighted this very issue.

Yoffe wrote that chemical biology student Kadwo Bonsu, a junior at the University of Massachusetts at Amherst, was the son of Ghanian immigrants and the only black member of his fraternity. He was an avid jazz musician and had plans to pursue his two passions, science and music, upon graduation.

According to the article, Bonsu smoked some weed with a fellow white, female student and they got to talking — then kissing. She made it clear that she didn’t want intercourse, to which Bonsu replied that was fine. Eventually she started performing oral sex, and it was then that she realized how high she was, and that she was uncomfortable with the situation.

“The encounter continued for a few more minutes, during which, she [R.M.] wrote, he cajoled her to stay—’playfully’ grabbing her arm at one point, and drawing her in to kiss—then ended with an exchange of phone numbers. R.M. had not removed any clothing,” wrote Yoffe.

She left, and soon felt, according to her statement, that she had been sexually assaulted — R.M. had felt a completely valid pressure to not leave him hanging, and thus she had stayed. Because she felt expected to, which sucks. And now, she felt violated.

Eventually, R.M. pressed charges that didn’t pan out. Nevertheless, the university placed restrictions on Bonsu that eventually led to a campus ban. He was ostracized from his fraternity, from his jazz band, from everything he had loved. He was eventually found not responsible for sexual misconduct, but still the school held up its ban. He tried to apply to other schools but was not accepted.

It’s uncomfortable, because no one wants to side with the perpetrator, but the truth is that the university was acting unfairly because of governmental pressures.

“The interim restrictions, the full-bore investigation and adjudication even though R.M.’s own statement does not describe a sexual assault—were mandated or strongly encouraged by federal rules that govern the handling of sexual assault allegations on campus today,” wrote Yoffe.

This isn’t a singular event. Definitions of sexual assault have become increasingly vague and troubling, under pressure of federal mandates and negative press.

At Brown University, a training video on consent expressed that “consent is knowing my partner wants me as much as I want them.”  This is absurd because of its vagueness in direction, and because it implies that partners should just know when sex with their partner is consensual. Consent is about having an open and honest conversation, not about reading minds.

At the University of Tulsa, and many other schools, guidelines state that students cannot give consent while under the influence, without specifying what amount of alcohol consumption is too much, and where the line must be drawn. If someone consents at one beer versus eight shots, does that count as sexual assault?

As recent as last month, four feminist scholars from Harvard University wrote a letter to the Department of Education addressing this very issue:

“Definitions of sexual wrongdoing on college campuses are now seriously overbroad..they often include sexual conduct that is merely unwelcome, even if it does not create a hostile environment, even if the person accused had no way of knowing it was unwanted, and even if the accuser’s sense that it was unwelcome arose after the encounter.”

With increasingly harried and imprecise methods of defining and addressing sexual assault issues, universities have created an environment of fear and guilt surrounding this issue.

As the authors of the letter wrote, “the definitions often include mere speech about sexual matters…they are so broad as to put students engaged in behavior that is overwhelmingly common in the context of romantic relationships to be accused of sexual misconduct. Overbroad definitions of sexual wrongdoing are unfair to all parties, and squander the legitimacy of the system.”

In fact, populations of men and women defensive of their behaviour, rather than understanding of the seriousness of sexual assault have become increasingly common. They are a product of a hostile environment where students feel that any of their actions could be construed as sexual assault or harassment.

Sexual assault is a somber, unrelenting monster of an issue. In my time as a college-going female, I have seen sexual assault chip away at its victims, leaving fragments of women I once knew to be brighter, happier.

Title IX, in some ways, has created a malicious atmosphere prone to people inclined to blame the victim, and make light of the consequence of sexually assaulting someone.

However, what stings the most for me is that most administrators are blind to the adverse effect of their policies.

They’re overcompensating to make sure they adhere to government standards of addressing sexual misconduct, and don’t really care about the consequences because they care too much about the funds.

What is apparent in all of this though, is that universities don’t care about me or my level of comfort, or how safe I feel walking alone at night — as long as funding is on the line. So long as this threat exists, schools will first do everything they can to keep their heads above water — even if it means following a ridiculous set of rules.

Ultimately money and fear, the true vices of humanity, tends to trump empathy and proper understanding. And frankly, I don’t know how the government didn’t anticipate that when they passed the guidelines that used money to instill justice.

Title IX was originally used to empower women in the 1970s, and to a certain degree it reignited the women’s rights movement. Title IX originally codified the notion that institutions could not discriminate based on sex and this set of guidelines supports, rightfully so, the idea that students who suffer from sexual assault and harassment are being deprived of equal and free access to an education.

Prior to Title IX, however, women like me were not considered equal to men. Men were given more academic opportunities, like scholarships, while women were considered unequal — only 1 percent of athletic budgets went to female sports played at a college level.  Title IX changed all that. While there are definitely more battles to be won, we’re still slowly moving towards true equality.

Yet, Title IX’s modern interpretation is setting us back. These battles, battles for safe campuses and equality, need to be won with justice and a societal sense of empathy and respect for women. Not with fear of losing federal funding — ultimately, fear will always backfire and lead us to a place from which it is even harder to recover.

There is a counter-argument to all this, I know. That something is better than nothing. But if it’s a flawed something, does that still ring true?