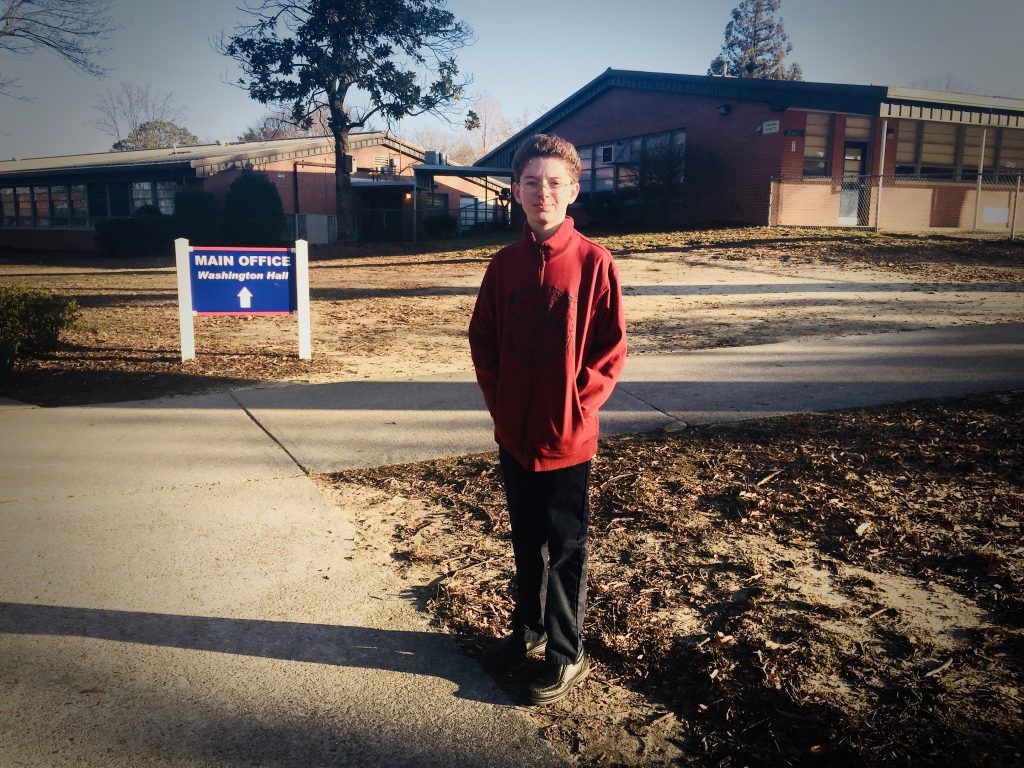 Wednesday morning I woke up angry. Yes, angry that I had to wake up at 6:30 am, that I had to edit my Model UN position paper, do my Spanish homework, and prepare for my algebra test. But mostly I was angry because I had to do a walkout. Any form of protest is wonderful, especially a school walkout, but the fact that this one is necessary is infuriating.

I was angry that no legislature in America had passed serious gun reform laws, even in Florida, where the Parkland shooting survivors started walkouts and the nationwide march for our lives movement. The NRA, which started out as a perfectly fine organization for hunters and gun owners, has become an organization that corrupts the government and promotes fear in our country. If I have not made it clear already, I walked out of class in the #NEVERAGAIN movement.

We are doing this not to take your guns, but to promote common sense.

The rights to self-defense shall not be infringed, but gun regulation alone doesn’t come close to infringing. Regulation is not taking your guns, it is making sure guns stay away from the people who shouldn’t have them. Regardless of party, most Americans agree that some people shouldn’t own guns, such as undocumented immigrants, people suffering from serious mental health problems, domestic abusers or people with felony convictions, and anyone with the means, motive, and opportunity for a mass shooting, or any shooting for that matter.

For the past few weeks, in both Student Council and IB Summit, Tuckahoe Middle School Principal Ann Greene led student discussions around the walkout and gun discussion while making it clear that the administration could neither endorse nor oppose a protest. Her goal was to maintain a safe environment. The end result was a school-authorized, but student-led walkout. My parents signed the online form a week or so before giving me permission to participate.

It was a poor decision of the school board to issue passes for this protest, as it was meant to be student-led and against school rules. This would have shown the legislature that middle school children were willing to suffer the consequences for standing up for gun reform–something that grown men in Congress have proven unwilling to do.

Today though, in Spanish class, we had a substitute who didn’t understand exactly what was happening with the walkout, so after some confusion, I figured out that I would get a wristband in block six when we were to leave class.

When the clock struck 10, I walked out with a handful of students from my class. We were among the first. Staff directed us to the football field as others came out in clumps, wearing the same wristbands, all headed the same way, until the section of the field we were in was full.

I snatched a few pictures and a video before an administrator announced over a megaphone that pictures and phones were forbidden. I took some more anyway. I asked some students for their thoughts on the event and gun regulation, and they wrote them down in my little notebook. Some students didn’t want to use their name, and I’ve redacted the last names of the rest in the interest of privacy as all are minors.

“I’m glad I took place in my first protest and I was glad to see how many people joined us,” an anonymous student wrote.

“It is nice to see Democrats and Republicans unite out here,” Charlie C. wrote, referring to a few conservative classmates who joined us.

“Sure, use [guns] for self-defense, but don’t let mentally disturbed people have them,” another anonymous student shared.

“I don’t think everyone knew what a silent march meant,” Emmett B. said about our chatty classmates.

“Instead of banning guns, [we should] prevent certain people from gaining them because if you have a mentally unstable person and give them a rifle, they will shoot 20 people. How is giving them a pistol going to change that?” Joseph M. said.

“I think people should have been more respectful because I heard a lot of people talking while we were commemorating people who were killed,” Gus D. wrote, echoing Emmett’s sentiments.

“I think it was disrespectful to the people who were trotting around aimlessly, but okay for the people talking about how gun regulation could have prevented this tragedy,” said another anonymous student, trying to draw a distinction between classmates who were passionate about the issue and others who were just having normal banter.

“I think that most people left because they wanted to miss class. This was a serious tragedy and I don’t that it’s fair to ditch so that you can miss class,” said another anonymous student.

“We should have walked out the whole day,” said a final anonymous student.

After that, I went up to Officer Medina, the resource officer assigned to our school. He wore either a taser or a pistol by his side but seemed nice. Medina, taking a positive view, said the protest, “shows that regardless of the tragedy we experience in life, we will always remain united.”

In the end, I’m still angry, but now, I’m angry with a purpose. We can change this. If we sulk around all day because of congressional disregard of the tens of thousands of people dying yearly, what will change? Now, we are walking out, marching, protesting, using our voice, and fighting tooth and bone for action. The current student-led resistance is more than my classmates and I could have ever hoped for, and more than an inactive Congress could have ever feared.