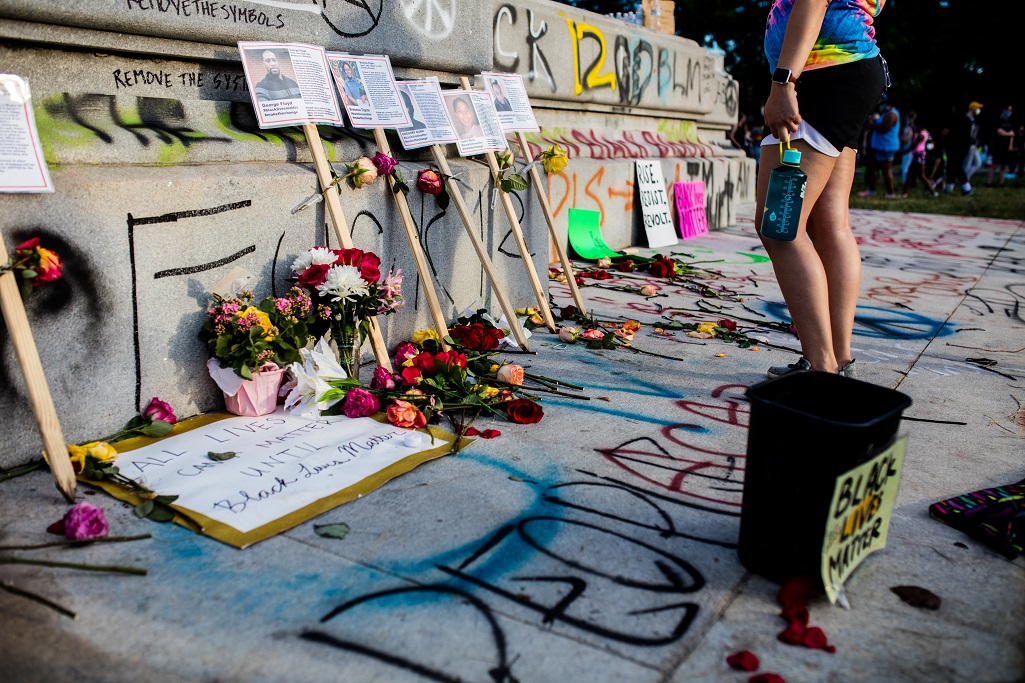 Rabbi Michael Knopf ponders the changing relationship Richmond’s citizens have with Confederate monuments in the wake of the protests against police violence that have transformed the city.

The recent wave of anti-racism protests have produced at least one tangible outcome: Sometime soon, Richmond’s Confederate monuments will be removed. As I have argued before, this move is both welcome and long overdue.

However, as plans are drawn for removal, leaders should note and consider the change that has occurred over the past week in how we — and especially people of color — are engaging with these Lost Cause icons.

Since the protests began in Richmond, demonstrators have covered the monuments, particularly the Lee Monument, with empowering movement messages like “Black Lives Matter” and “End White Supremacy.” As one friend put it on social media, it is as though everything people of color and their allies have thought about or written on those monuments in invisible ink over the years became legible overnight.

The newly redecorated and recontextualized monument is truly striking. Evidently, I am not the only one who thinks so. Over the past couple of weeks, people have taken to gathering at the base of the Robert E. Lee Monument to read the messages, to reflect, to pray, and to add their own notes, prayers, art, flowers, and memorials to black victims of police violence. This erstwhile shrine of white supremacy has been reclaimed by people of color and transformed into a tabernacle of justice.

Those of us in the Jewish community might see parallels between what’s happening today at the Lee Monument in Richmond and how our people have historically engaged with a different kind of monument, the Western Wall in Jerusalem.

The analogy is imperfect. The Western Wall is the remnant of the ancient Jewish Temple, something Jews thought of as good. The Lee Monument, on the other hand, like the other statues on Richmond’s eponymous avenue, was erected as propaganda of the so-called Lost Cause, a movement to reassert white supremacy in the South after the Civil War. They were put up in order to distort history for nefarious political purposes. Richmond’s statues were always bad, and their destruction is a positive development.

But there are ways in which the analogy could be meaningful. According to Jewish tradition, the Wailing Wall is a symbol of what is broken in our world, and a reminder of how we have individually and collectively contributed to that brokenness. It is a place to remember how we have broken faith with God and with each other, and to commit ourselves to rebuilding what we have destroyed.

A little background: in the year 70 CE, Roman legions sacked Jerusalem and destroyed the Holy Temple, the epicenter of ancient Jewish religious life and, metaphorically at least, God’s dwelling place on earth. All that remained amidst the rubble and ruin was the Temple Mount’s western retaining wall. In the years that followed, the Western Wall became a gathering place for Jewish pilgrims to mourn the Temple’s destruction. Over the course of centuries, it became commonplace to leave notes with prayers in the cracks of the wall. Eventually, this site of community, prayer, and grief would go by a more evocative name, the Wailing Wall, because of the tears shed there.

The tears that Jewish worshippers shed at the Wailing Wall have been laden with penitence and longing. Penitence, because when the ancient rabbis autopsied the destruction of the Temple, they insisted that it happened because Jewish society was mired in unfettered, free-flowing hate. The Wall reminds us what happens when we allow hate to run rampant. Hopefully, it also moves us to advance inclusion.

And we have cried out longingly at the Wailing Wall because Jewish tradition equates the destruction of the Temple with the perpetual brokenness of our world. As God’s metaphorical house, the Temple symbolized the brotherhood and sisterhood of all humanity. Consequently, the destroyed structure, embodied by the Western Wall, reminds us of the persistence of injustice and disharmony in our world. The Wall forces us to confront the world’s ongoing brokenness, impels us to yearn for restoration, and inspires us to be agents of repair.

On some level, perhaps we are today seeing those same messages in Richmond’s refaced Confederate monuments: that unrestrained hate has resulted in catastrophe; that many of us who benefit from white privilege, even if we are not guilty of any specific wrongdoing, bear responsibility for systemic injustice; that there remains profound brokenness in our world that we must collectively repair. Now that the monuments have been exposed for what they always were, now that those of us who believe in racial equality and pluralistic democracy have asserted power over them, now that they have been slated for removal, perhaps we are now relating to them less as the idols of white supremacy they were created to be, and more as symbols of what white supremacy has broken in our society.

It is undeniable that the monuments were erected to advance a racist agenda, and that they have been a cruel reminder for decades of lingering racial inequality. And yet I wonder if, over the past week, people have begun to relate to them  more as reminders of the ways in which racism continues to break us apart, and signposts calling us all to advance the cause of justice.

That doesn’t mean I think the monuments should stay. On the contrary. And I also recognize that as a person who presents as white and who has benefited from white privilege, my views on the subject ought to matter less than the voices of people of color. I only offer the thought that perhaps, in place of these monuments, we might consider erecting something that, like the Wailing Wall, evokes our collective repentance and yearning, something that reminds us of our most cherished values and that calls us to repair our society through them. Maybe this means we should just remove the statues and leave behind the empty, graffiti-tagged pedestals. Or maybe we should build new monuments altogether, symbols of inclusion and justice.

Whatever we choose to do, it is my hope that these sites remain what they have become in recent days: reclaimed and newly hallowed ground for people of color and their allies; spaces for our diverse community to gather together to bewail what is broken in our world, to dream about what could be, and to recommit to the work of repair.