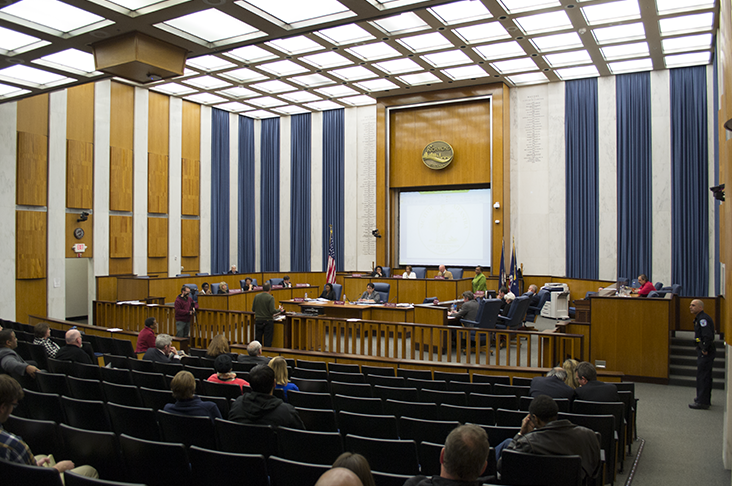 Him and Dirk Graham, owner of Bottoms Up Pizza, politely went back-and-forth in front of the council expressing opposing viewpoints on Stone Brewery coming to Richmond.

“My restaurant is 5,000 square feet, this is a 30,000 square foot restaurant,” said Graham. “It’s six Bottoms Ups in one.” Graham went on to talk about the potential effects of the Brewery on other restaurants in the downtown area.

“For every tax dollar you think you will generate from this project, you will lose that from [other businesses] that will be lost,” said Graham

Stone Brewing Co. is expected to open a massive brewery and restuarant location along Richmond’s Riverfront. Stone said they could bring as many as 400 jobs and $20 million in spending getting the business up and running.

The council was voting to amend the details of the official agreement between the City and Stone Brewery to transfer land essential to bringing the new massive brewing operation to Richmond.

Council voted to push the decision to a special meeting on March 2.

The agreement would give the former Intermediate Terminal Building from the city to the Economic Development Authority in order to facilitate the Brewery’s riverfront restaurant phase.

The project will have the EDA convert the building, currently valued at $1 million, to a riverfront restaurant and beer garden. The terminal has sat dormant for decades. The project is estimated at a cost of $8 million dollars.

This ordinance’s original patron was Councilman Parker Agelasto, but the amendments were the work of the council as a whole. Two council members made an unpublicized trip to Stone Brewing’s San Diego facilities.

Councilwoman Cynthia Newbille paid for her own trip, but Ellen Robertson’s trip cost the public $1069.24.

Also pushed to a future Council Meeting was an agreement on how revenues from the development could be used. The agreement was an amendment to the original resolution allowing Stone Brewery to come to the area. The resolution received heavy scrutiny by a few represented at the meeting, most vocally from Bottoms Up owner Graham.

“Every dollar that will be generated by Stone Brewing will be returned twofold in rent and taxes,” said Ondrak. “That’s a massive investment in the city over 30 years. That’s not anything that I think deserves any further contemplation.”

When Ondrak asked those who were there in support of this project to stand at the end of his comment, about half of the remaining audience stood up. He indicated that more people had been present earlier but left confused, thinking the resolution would be moved to the next meeting without public comment.

One of the many supporters of the project that followed Ondrak was Craig Spitz (green sweater, image below), the CFO of Stone Brewing. The CFO urged the council to move forward on the land use so that Stone Brewery can order brewing equipment that has a long lead time.

He also reminded the council the reason that the city is developing the project is so Stone Brewery can sign a lease agreement for the next 30 years.

“I’m not coming in with the financial wherewithal to build my own brewery and build my own restaurant,” said Spitz.

Dorsey was then ejected from the meeting.

Another ordinances, asking for the Mayor to move funds from the Shockoe Infrastructure Improvements project in the budget to the School Maintenance project, was also pushed to the March 9 meeting.