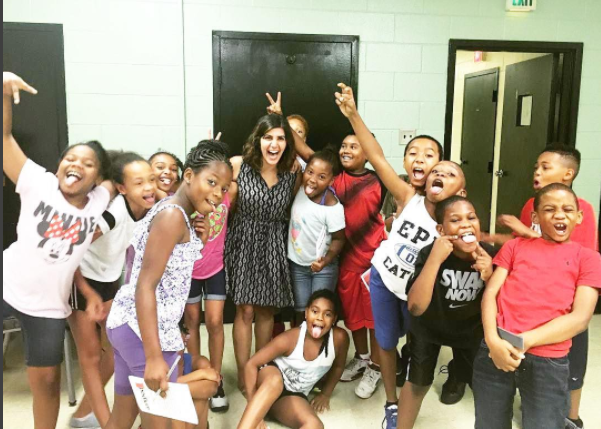 Richmond Public Schools continues to have one of the lowest graduation rates in the state, but one program seems to be changing that while increasing students interests in creative writing.

Richmond Public Schools continues to have one of the lowest graduation rates in the state, but one program seems to be changing that while increasing students interests in creative writing.

Aerin Mills was able to find his voice, write about his interests, and gain a sense of community with help from the program in question – The Podium Foundation.

“My big thing was creative writing,” said Mills, now a sophomore at VCU who volunteers with Podium after taking part in the program in high school. “I like to tell stories, play around with characters, scenes, things like that.”

Established in 2008, The Podium Foundation provides Richmond Public School students with an opportunity to develop their writing and communication skills through workshops and mentorship programs. The goal of Podium is to connect students with professional writers, authors, and editors who can help students achieve their full potential. To that end, the Foundation publishes a literary journal comprised entirely of student writing that is selected and edited exclusively by students themselves. 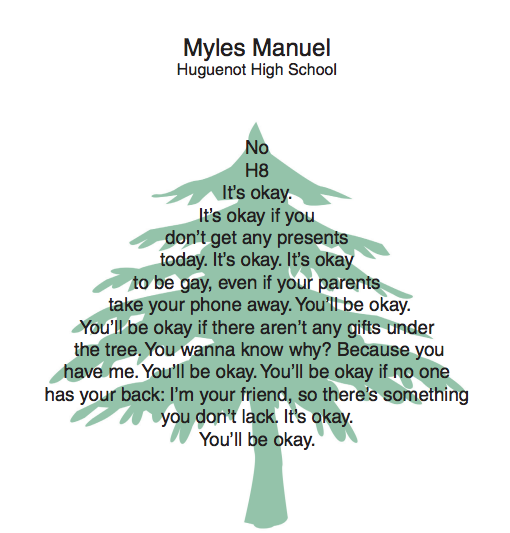 A poem by Myles Manuel of Huguenot High School, from Podium’s 2015 Holiday Zine

“The other thing that we’re seeing is that the students who are in our program for at least three years in high school- not everyone comes in as a freshman- one hundred percent of them graduate on time,” says Executive Director and Co-Founder Lindy Bumgarner. “And we’re tracking 80% of them go directly into some kind of post secondary education.”

According to 2014 numbers obtained by the Richmond Free Press, RPS has a graduation rate of 80%, well below the state’s average of 90%, and below neighboring counties like Chesterfield (90.2 percent), Hanover (95.5 percent) and Henrico (89.9 percent)

When it was originally created, Podium only directed programs for high school students. However, about three years ago, the organization expanded into Richmond’s middle schools.

By offering its programs to middle schoolers, Podium could offer a safe place for middle schoolers to go after school and provide access to academic enrichment programs. 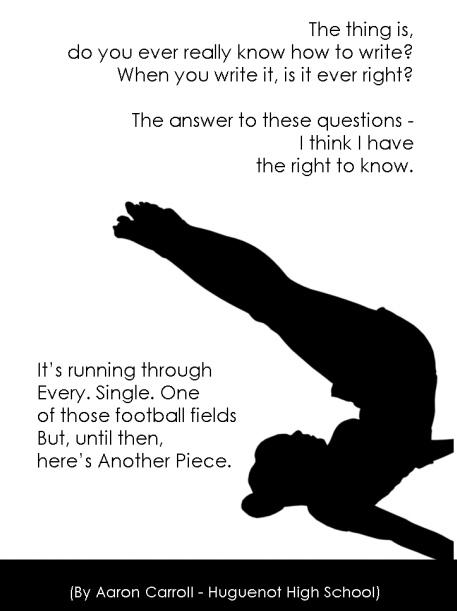 A poem by Aaron Carroll of Huguenot High School from Podium Journal V. 6

“We wanted to start working with sixth graders so that they would have two years of writing and communications programs to get them ready to successfully pass eighth grade, pass that critical eighth grade writing and reading SOL,” said Bumgarner. “Also, by developing a relationship with middle schoolers, the hope would then be that they would have a great time with mentors and then continue on with podium in high school”

The Podium Foundation’s expansion into middle schools actually provided an opportunity for high school students to become more involved as well, as they developed their own program to address the younger student’s needs.

“They created [the Writing Mentorship Project] because they wanted opportunities to give back, to network with each other across different schools and to meet professionals,” said Bumgarner. The end results is a five week summer intensive where older students instruct and mentor the younger ones. During the year, their work continues in area middle schools in the form of an after school program.

Though Podium focuses on developing writing skills, students who graduate from high school after participating in Podium don’t tend towards any one career.

“Some of them, yes, want to be artists… but some of them are very interested in STEM fields,” said Bumgarner. She said she’s had Podium alum end up in graduate schools and law programs – she recalled one in particular who graduated with a degree in psychology and returned to Richmond, working in health and human services non profit sector.

In Podium workshops, students get the chance to try their hand at prose fiction, drama, autobiographical nonfiction, and persuasive writing, though Bumgarner notes that poetry is particularly popular with students. In these workshops, instructors go over a specific topic for that day, and then students, along with the workshop coordinator, write together for an hour or more.

The most popular period of the meeting, though, is when students can volunteer to share some of their writing at the end. 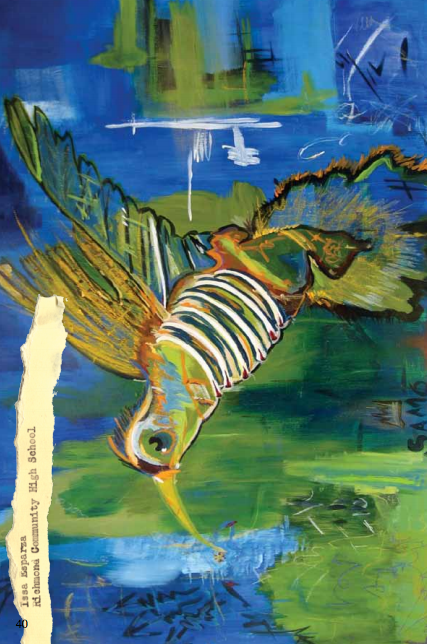 “They respond and give feedback and critiques to each other,” said Bumgarner. “And that is very powerful to watch, because they’re very supportive of each other and they know how to get at the heart of it. They ask really meaningful and important questions of each other’s work, and it’s really great to see them going through that thinking process.”

Dean McKnight, Curriculum Coordinator, has been with Podium for four years. He is responsible for creating and adapting a year-round plan on how Podium can best reach its students.

“We begin our session by saying, what are you interested in?” said McKnight. This question, and others, help to define and individualize programs as well as get kids excited about curriculum that is catered to them.

McKnight has a lot of experience with the craft of writing, having studied with David L. Robbins, co-founder of the James River Writers, at VCU. Even with his background and education, he finds himself learning from the very students he is teaching.

This comes about when students come to him for help with a problem in writing craft that he himself has struggled with. “It not only forces you to approach it from a different perspective, you are able to collaborate,” he said. “We provide each other a backboard on which we can express ideas. And sometimes, they will say something even now where you say, oh, that’s an interesting way to look at that.” 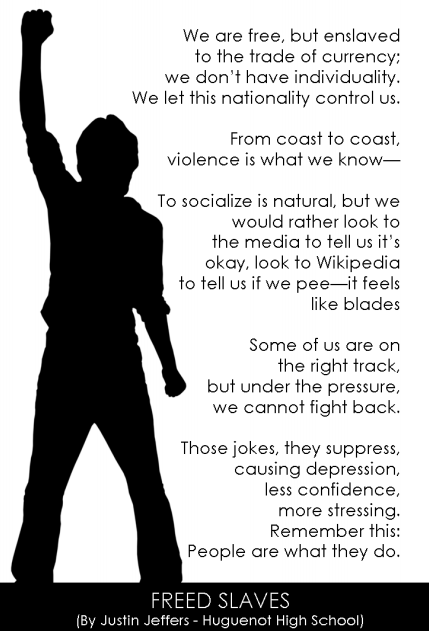 A poem by Justin Jeffers from Huguenot High School from Podium Journal V. 6

It can be a lot of work, coordinating lesson plans for students at different locations across Richmond, but for McKnight, it’s worth it. “We exist exclusively for our youth,” he said. “We’re going to do everything in our power to provide them with opportunities to engage in those skills with which they are already interested.”

Mills took advantage of some of those opportunities, attending a Young Writers conference at the Edgar Allan Poe Museum which Podium helped him to find. He was also published in Podium’s literary journal his senior year.

Because he had made submissions to the journal and worked on its editorial staff through most of his time as a student, Mills’s publication came as a real honor to him. “A lot of care is put into the pieces that make it into the literary journal,” he said. “It’s hard to be like, ‘oh, this is the best,’ or ‘this piece is better than that.’ It’s a lot of how the different pieces can synergize with each other, and how they are contextually.”

Beyond networking and publication, Podium gave Mills the chance to study literature outside of the academic canon, helping him to understand the kind of books that most people are likely to pick up and read.

“I think Podium gave me a lot of opportunity to learn how contemporary writing works,” said Mills. “Because a lot of the time in public schools, they talk about ‘Catcher in the Rye’ or ‘Lord of the Flies’ or something like that. It’s not really the contemporary writing that’s really popular in a lot of young adult fiction now. And I learned this from Dean [McKnight] specifically, he kinda helped me to realize that we read these older books for a reason, but they aren’t the basics. They were something that was popular then, but popularity in literature changes, and relevancy and contemporariness is super important and Podium helped me with that a lot.” 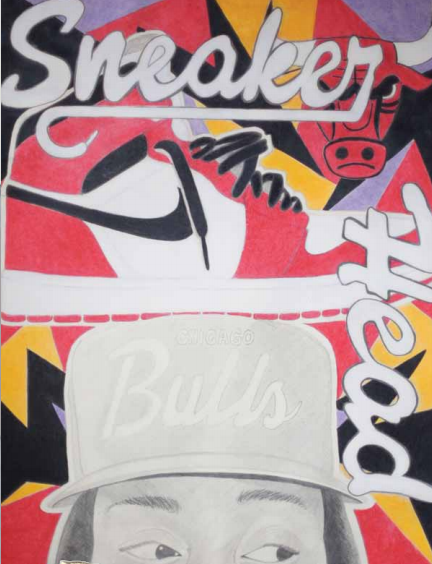 The biggest impact that Podium had on him though, was to give him a sense of community. “It was cool to see, oh yeah, there’s people across the city doing stuff, the same things I am, like writing their emotions and telling their stories and getting published as such young writers,” said Mills. “It’s really a huge opportunity, to say that you’re a published author at such a young age.”

Private donations are critical to the success of the Podium Foundation. These donations allow Podium to support students who struggle with hunger at home with take-home meals and to provide school supplies for students who cannot afford them.

If you or someone you know is interested in getting involved directly, Podium invites professional writers and educators to volunteer for the organization. You can learn more by contacting the Podium Foundation directly.