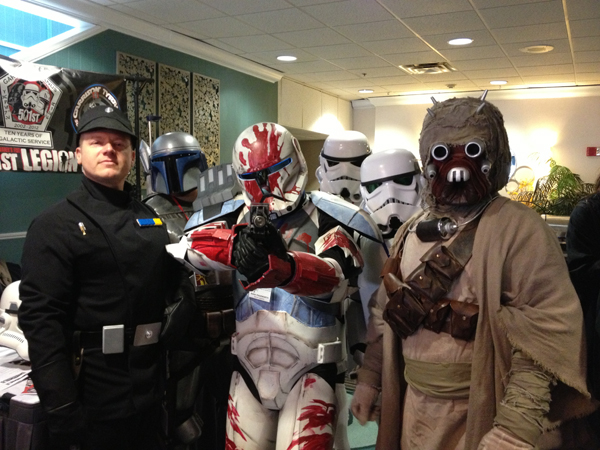 RavenCon is bringing everything under the sci-fi/fantasy umbrella to Richmond this weekend and it’s going to be a blast.

RavenCon is bringing everything under the sci-fi/fantasy umbrella to Richmond this weekend and it’s going to be a blast.

The convention is in its ninth year, and you’ll find an art show, a “masquerade” costume contest, a game room which never closes, and much more. Mike Pederson, the RavenCon Convention Chair, said he couldn’t pick an aspect which he’s most excited about if he had to.

“(But) there are some new things this year that I’m definitely excited we’re adding. A Magic: The Gathering tournament, which we’ve never done before, three local high schools are bringing their robotics teams in for a [two-hour] robotics demonstration,” said Pederson. “And for our kids program we’ve got a bunch of spy training panels for kids, and I think the kids are gonna have a blast. I wish I could do it.”

Sci-fi and fantasy enthusiasts of all ages, interests, and pursuits won’t have any trouble finding something to do. While the convention itself has gotten bigger every year, their annual costume contest has grown even faster.

“I expect an extremely good turnout for [our Masquerade] this year because everybody loves cosplay these days,” Pederson said. “I guarantee there’ll be people who change costumes four or five times over the course of the weekend.”

The gaming sphere of RavenCon won’t be console or PC-based, but mostly played with cards, on boards, or pen-and-paper role-playing. Badass Zombie Killers, Dungeons & Dragons, Star Wars Saga Rules, and Pathfinder Society are just a fraction of the games at RavenCon. Their first-ever Magic: The Gathering tournament isn’t coming without fanfare either.

“The company that does Magic will release new decks periodically, and the week after the convention is an official release weekend. So we have the tournaments we’re doing, and two of the three will be field-deck pre-release tournaments,” Pederson said.

“So they’re cards that have never been seen before, just now getting to the public this weekend. That’s gonna bring in a good crowd and make for some fun times.”

You can take a break from the competitive side of RavenCon by checking out their art show. Pederson said it’s impossible to predict what will be on display from year to year, but there’s always a lot of paintings, watercolors, pencil sketches, digital media displays, and jewelry displays.

Mike Pederson emphasized the convention will always stick to its roots, regardless of how many new aspects find their way into the show.

“Despite the fact we have a palette of different things going on all weekend, we still consider ourselves primarily a literary convention,” Pederson said. “We do a lot of writing workshops, and focus a lot on books and fiction. At the heart of it, we love books.”

All of this is setup by people who genuinely have a passion for science fiction and fantasy.

“Well it’s a volunteer-run organization. Everyone does this because they love science fiction, they love conventions, they love the world of fantasy. So when you’re dealing with a 100 percent volunteer [staff], it’s a little like herding cats,” Pederson said with a laugh.

“But we all do it because we love doing it. The RavenCon staff has been working together for almost 10 years now, and we’re a tight-knit group.”

Complete event schedules can be found on the RavenCon website. It’s happening this weekend, April 25-27th at the DoubleTree by Hilton Hotel Richmond – Midlothian.

A full weekend ticket costs $45, daily rates for Friday and Sunday are $15, and Saturday costs $30.