If you weren’t at the Richmond Convention Center this past weekend, you should have been.

Check out more photos from cosplayers at Wizard Con here.

The weekend’s event drew thousands of excited fans who came to interact with pop culture, sci-fi and comic-book icons as well as different tiers of fandom-celebrities in what we hope will be just the first of many Richmond Wizard Cons to come.

Friday afternoon, the first day of the event, started out pretty slow and quiet. There was speculation that Wizard World would likely not return next year if the turnout stayed lackluster all weekend. However, Saturday’s crowd at least doubled in size, as fans from near and far came out to experience the con.

The overall smaller convention, in comparison to larger cities (i.e. San Diego, whose convention center could fit most of Richmond’s population), allowed time for fans to really interact with and talk to celebrities they wanted to see; a similar sentiment was expressed among the celebrities and artists we spoke to.

Jason David Frank, of Green Power Ranger fame, spoke with us for a few minutes about his role in the Wizard World scene and his desire to get some fresh tattoos in Richmond (we had a few recommendations of local shops). 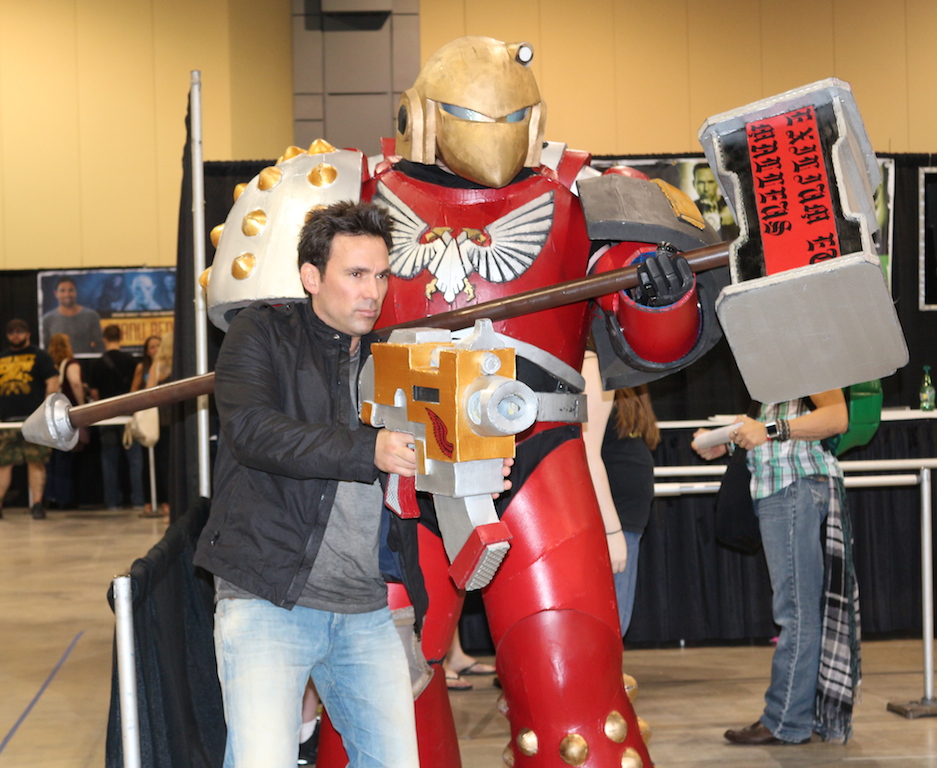 He was present all weekend, spending a lot of time with his fans and also hosting the costume contest on Saturday night. He explained how he loves coming out and meeting the fans and, even after twenty years of work, still feels humbled, “I always tell people, when I’m morphing, I put one leg in at a time.”

From a full family dressed as the Guardians of the Galaxy crew, to the expected superhero costumes, everyone was dressed to the nines.

Wandering along the vendor stalls, it became pretty obvious this was an all-inclusive event – the air was alive with the shrieks of kids running around in costumes fighting bad guys, while their parents and countless others haggled for deals.

Fans both young and old came out to see their favorite artists and celebrities. Bruce Campbell hosted a panel that seemed to empty the main room, while Adam West and Burt Ward discussed Batman in their panel with their diehard fans. 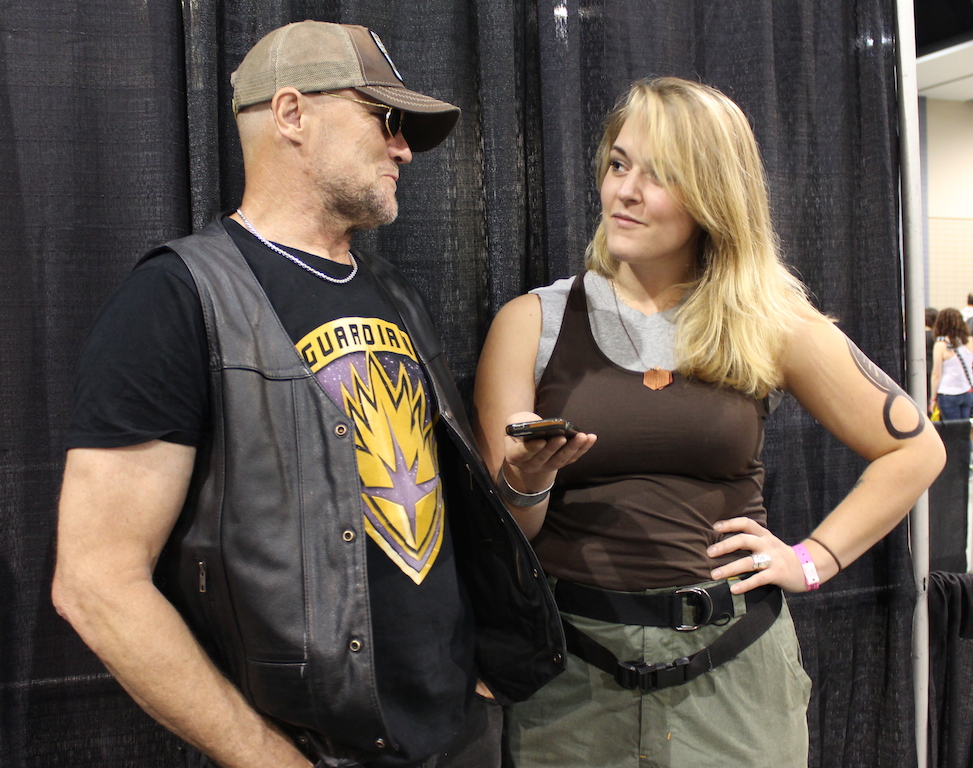 Michael Rooker, who you’ll recognize as the bounty hunter Yondu in Guardians of the Galaxy and the misunderstood bad brother Merle in AMC’s The Walking Dead, spoke to us a bit about working on the set of Guardians of the Galaxy explaining that, “[he] was the only handful on the set.” He also apparently got pretty toasty the night before with Ron Perlman at Penny Lane, later venturing to 3rd Street Diner, something he said he very faintly remembered – as is Richmond custom.

The costume contest, the line for which was pretty impressive and lengthy, was a huge hit, with a Best in Show win by a fan dressed as a Space Marine, having spent “too much time” on his costume, which consisted of 40 lbs of PVC pipe and foam. 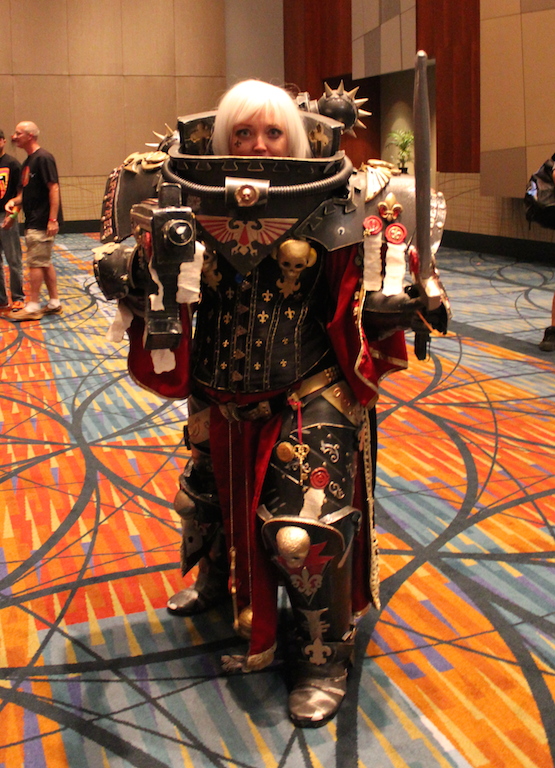 There was also the 12-year-old girl who won Best Female Villian, with the costume she built based off of a villain she’d created herself. The fan favorite was a costume duo featuring a seven-foot tall power loader costume, which you’d recognize from Aliens.

Immediately following the contest, the after party started at Capital Alehouse downtown, where some people didn’t bother changing out of their costumes before getting serious with booze and dancing.

I never suspected that the Joker was such a good dancer or that Wolverine was going to offer to buy me drinks. The party eventually moved to Rockband night at Emilio’s in the fan, where Cyclops was spotted getting rowdy to “Baby Got Back,” while other comicon attendees partied just as hard out of costume.

All said and done, some of the best conversations we had this weekend were with the artists. We spoke to Neal Adams (DC Comics), Sam Ellis (Adventure Time, Archer), and John Cappello, a VCU alumni/NY transplant who came back to Richmond for Wizard World.

We sat with Neal Adams, who has helped define modern DC characters like Superman, Batman, and Green Arrow, for a lengthy interview.

Our conversation went everywhere from comics, how he’s rarely impressed by costumes, and how he’s hoping people learn to come to comicon and purchase things from the vendors and artists instead of going straight for celebrities.

He also had a great experience at Comfort, praising the fried chicken the cooks whipped up for him.

Sam Ellis, a lead illustrator on FX’s Archer, had a taste of Sugar Shack when a fan snuck him donuts, with security thinking the fan just had comics in the box. Ellis said he is looking forward to coming back to Richmond for a signing in the near future (he’s also proposing a Sugar Shack sponsorship…any bites?).

John Cappello and his fellow writer/illustrator, Kwan Wilson, travelled to Richmond for the comicon, having had experiences at various comicons in New York. Cappello, spoke to us at length about his newest series “The Wonderful Wheels,” in which a young girl takes over her own story, withdrawing into her mind after a tragic accident that left her bound to a wheelchair.

Kwan is currently working on a series called Grits. He sold out of signable-swag before the weekend was even over, showing how important it is to check out every artist’s table at these events, as you’re likely to find something you just can’t walk away without. (You can find John and Kwan’s work at here, and here.

The best takeaway from this weekend was the diverse crowd, especially in relation to age, and the fact that Richmond finally earned its badge as being a worthy city to host such an event.

Coldon Martin, a Richmond-based fan, was one of the few people we saw in Trekkie gear, with the exception of his friend, Austin Marks.
“The cross-generational factor was really cool to see…seeing a bunch of kids experiencing [the comicon],” Martin said. “Along with getting to know all these cultural touchstones that we grew up with. It’s really touching. Despite all the gaps between us, it’s like we’re all on the same page for a weekend.”

After a public vote by those in charge of the event, it appears Wizard World does plan on returning next year for another weekend of comics and costumes.

Biden shows a strong lead over Trump in Virginia, and Senator Mark Warner is on track for re-election, but mail-in voting remains a more... READ MORE

At Marcus-David Peters Circle this summer, a small library popped up during protests to educate the public about liberating the working... READ MORE

Biden shows a strong lead over Trump in Virginia, and Senator Mark Warner is on track for re-election, but mail-in voting remains a more... READ MORE

At Marcus-David Peters Circle this summer, a small library popped up during protests to educate the public about liberating the working... READ MORE