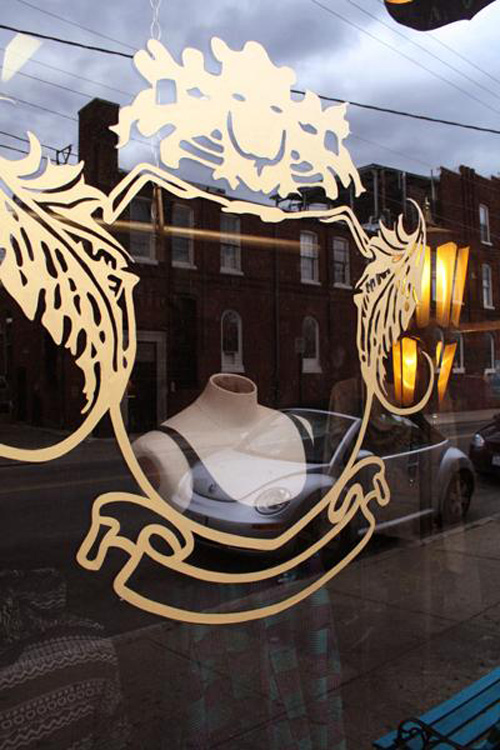 If you have not done so already, please read Chris Dovi’s piece for Style Weekly on the recent actions against Rumors and other local businesses http://bit.ly/jcwfj

I’m sitting in an empty room of a Fan bar at 2:30pm on a Thursday, drinking margaritas with Casey Longyear and Marshe Wyche (as well as some friends and supporters) of Rumors Boutique, and we’re celebrating. An hour earlier under the hard fluorescent lighting of a downtown Richmond courtroom, their hearing for failure to pay taxes and an expired city business license was at the top of the docket.

If you have not done so already, please read Chris Dovi’s piece for Style Weekly on the recent actions against Rumors and other local businesses http://bit.ly/jcwfj

I’m sitting in an empty room of a Fan bar at 2:30pm on a Thursday, drinking margaritas with Casey Longyear and Marshe Wyche (as well as some friends and supporters) of Rumors Boutique, and we’re celebrating. An hour earlier under the hard fluorescent lighting of a downtown Richmond courtroom, their hearing for failure to pay taxes and an expired city business license was at the top of the docket.

At 1:15, as I descended the escalator to the lobby, I was happy to find that after my hunt for the right courtroom, they were still sitting there, waiting. As always the pair was fashionably poised, handbags and dresses that would otherwise be hanging on mannequins in their shop were draped instead from their shoulders. As Casey discussed her defense strategy with me, a well dressed man with Richmond City credentials and what appeared to be an apprentice in tow approached our small congregation. After cordially introducing himself, he offered a deal, a plea bargain of sorts.

The Rumors argument against failure to pay taxes on revenue generated by the shows that they hosted had apparently resonated: all of the money collected at the door went directly to the bands, and was therefore not taxable income for their business. The issue of a city business license, having expired two months before the much publicized CAPS raid, was a different story, and neither of the proprietors felt legally justified in disputing the charge. The offer was this: plead guilty to not having a license, and the charge for unpaid taxes would be dropped. They would incur a $1,000 fine, which would be suspended for three years, and, pending a lack of future violation, disappear. They would pay only the $70 court fees.

While the attorney came across as slightly condescending, with a deliberate manner of speech inherent in both earnestness and deception, he did seem to be working in the best interest of the defendants. I suspected ulterior motivations, perhaps political or career oriented, but a city policy of targeting local art and culture had freshly stirred a healthy dose of cynicism towards those voluntarily involved in the judicial system. He repeated several times that he was not trying to shut them down, and made every attempt to downplay the severity of the situation, at one point saying “you didn’t have your license, shame on you.” He played his cards well, and there was a universal sense of ambiguity as to whether he was prosecution or defense, posturing as an institutional proponent of local art and entrepreneurialism in the harsh face of an unsympathetic bureaucracy.

As we were called into the courtroom, the attorney informed Casey that if anyone asked if she had been convicted of a crime, the answer from this point on would be “yes.”

The Judge accepted the agreement, articulating the requisite forfeit of a right to trial and council, as well as the fact that the charge was an otherwise jailable offense. The hearing was over well inside of twenty minutes.

Surprising was the fact that, despite institutional excuses for legal action against these unconventional performance spaces, centering on public safety concerns for inappropriately zoned structures, the issue of missing permits was not brought to the Judge’s bench.

Victory tastes good, in this case like lime, salt, and tequila. But the question of selective enforcement against a bourgeoning community of mutually beneficial artists, performers, venues and businesses cannot be answered by the favorable outcome of one hearing. It remains: Why is a program designed for preventing the deterioration of neighborhoods by signaling out havens for drugs and violent crime being vigorously applied to an innovative use of retail space? This question is particularly relevant when the positive influence a vibrant arts scene can exert on a town, neighborhood, or city is taken into account.

The Rumors case begs particular attention. Casey and Marshe were not involved in a tactical evasion of taxes, nor were they harboring ABC or drug violations under the guise of artistic expression. They are here, in Richmond, not out of necessity, but because they are inspired by the diversity, energy, and potential of our city.

When they opened their shop, they had no plan to host bands. But with the closing of the Nancy Raygun, the need for a new show space was brought to their attention, and they stepped in to help touring acts who suddenly found themselves without a place to perform. The vision evolved into providing a culturally respected forum for performances that would otherwise be relegated to dingy Oregon Hill basements, allowing them to escape the stigma of less coveted venues.

Recently, they started a new project: The Richmond Women’s Collective. The concept is simple; to attain non-profit status and operate as an event planning and promotional team, throwing benefit parties and shows to support local, independent businesses owned by women. These events will ideally be held at a wide range of venues, hopefully including (but not limited to) a sufficiently-licensed Rumors.

As a city with the building potential that inspired Rumors to open, we cannot afford to allow the gasket of CAPS to deflate the growing movement towards grassroots urban revitalization. It is clear that while the letter of the law has been followed in the recent series of raids, the spirit of the initiative behind those laws has been lost.

If Richmond is to grow into the southeastern capital of art, music, and culture, the energy behind this movement needs to be fuelled by City Hall, not extinguished by the efforts of indifferent law enforcement agencies trying to boost their numbers. They could have more easily and efficiently notified these entrepreneurs of their violations, warned against potential prosecution, and avoided the brutish spectacle of a large scale raid.

This is where we, the citizenry, media, business and arts community, need to step in. This is not a matter of national policy, and we are not ineffectual demonstrators screaming at the impenetrable walls of governmental hierarchy. The people at the helm of this crackdown are sitting next to you at your favorite restaurants, walking their dogs down your street, and making decisions that affect your life, our future, and that of the city.

As we pay our tab and stand up to leave, Casey gives me a handwritten letter, torn out of a thrift store notepad. I’ll leave you with this:

“We have events to help the local arts community, not to make a profit. Many people might say it’s not worth the time to have these community events without financial gain, but by supporting our community, they ended up supporting us.

We not only got support from the bands and their friends, but many people came into the store that normally wouldn’t have entered the boutique.

It gave us the opportunity to stay open later for sales, and many
people made purchases we paid taxes on during these events.
Donations were not always in the form of cash.”

To get involved:
Christina Newton of Curated Culture will be meeting with the Mayor Tuesday, June 2nd, send any concerns you would like addressed in this meeting to:
314 Brook Road
Richmond, VA 23220
Or call her at 804.344.1508
www.firstfridaysrichmond.com
Save Richmond Art And Music Facebook page: http://bit.ly/TllhQ