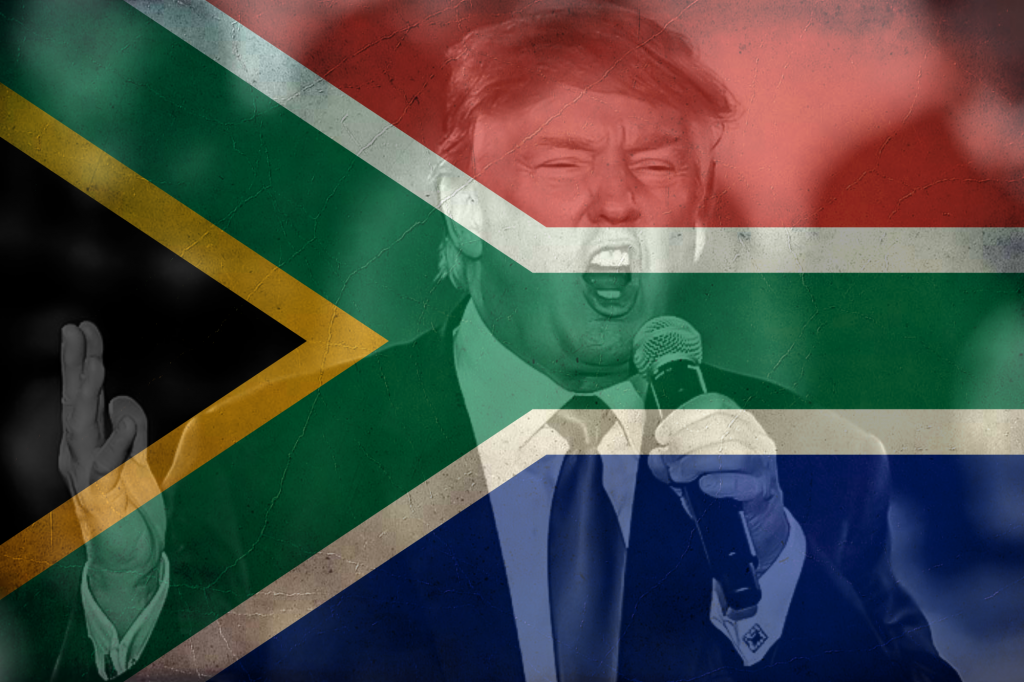 Last summer, my VCU study-abroad students and I stood in the dim but pretty interior of a little house made of corrugated tin in the Soweto township of Johannesburg, South Africa. With us was Thulani Madondo, a 2012 CNN hero, a vibrant, fast-talking South African who was recognized for founding the Kliptown Youth Program and supporting hundreds of Kliptown students in their efforts to “lift themselves out of poverty through education.” ‘

Kliptown is one of the oldest sections of Soweto, home to more than 40,000 people who live without running water, plumbing, or electricity. Overcoming this type of poverty is nearly impossible in South Africa, yet Madondo could tell story after story about the successful students he has guided through his programs, including the 17 Kliptown Youth Program students who have graduated from university.

And yet, as we stood there in June of 2017, in the largest township in South Africa where more than 1 million people live in similar conditions, Madondo only wanted to talk about one thing: How we could have voted for [President] Trump when the world watches?  It was the same at every place we visited, and my students were no longer surprised. As soon as our American accents were noticed, South Africans would engage with us in a state of near-constant bewilderment. “This is who you picked to replace Obama? Don’t you know that what you do affects us too?”

This is what makes Trump’s tweet about protecting “white” farms in South Africa so troubling and obviously nefarious for both Americans and South Africans. For those of you who missed it, yesterday the president tweeted, “I have asked Secretary of State @SecPompeo to closely study the South Africa land and farm seizures and expropriations and the large-scale killing of farmers. ‘South African Government is now seizing land from white farmers.'” 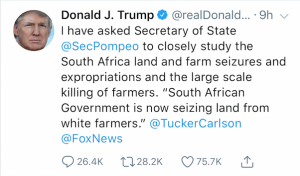 Hearing the deep unrest from South Africans about the US election was a curious juxtaposition: Their concern with the US presidency felt like a warning from a people who knew and deeply understood the dangers of a corrupt president, and usually, our conversations ended with that same sense of bewilderment. At the same time, I was having these conversations in South Africa with my students, their highways were lined with political signs pleading with South Africans to rid the government, the country, of their own power-hungry and corrupt president, Jacob Zuma.

Like all townships in South Africa, Soweto is populated almost exclusively by black Africans. This history of townships in the country is intimately tied with South Africa’s apartheid past. As the government codified discrimination and racism into law – apartheid means “separateness” in Afrikaans – people in power enacted laws to move black and other non-white Africans from their homes and restrict their populations to townships like Soweto outside of Johannesburg and The Flats outside of Cape Town. It was a feat of brute force in response to a deep and basal fear: The European explorers who first touched the coast of South Africa in 1498, and colonized Cape Town by 1652, would become the white Afrikaners of today. However, this original Dutch colony and its modern descendants have always been just a small fraction of the overall population.

The fear that apartheid-era Afrikaners felt about their place in of South Africa and the domination they used to control it became part of their national identity, and shaped the apartheid regime into one that attempted to reduce access to resources and restrict the rights of Africans without white skin.

The language of apartheid stoked that fear while hammering at what could be lost if whiteness were swamped. D.F. Malan enacted apartheid in 1948, telling other Afrikaners, “Let us stand together, let us preserve our nationality and with our nationality our national character.” In 1964, the Minister for Coloured Affairs, P.W. Botha, told parliament that “I am one of those who believe that there is no permanent home for even a section of the Bantu [black Africans] in the white area of South Africa and the destiny of South Africa depends on this essential point. If the principle of permanent residence for the black man in the area of the white is accepted then it is the beginning of the end of civilization as we know it in this country.”

This is language equating whiteness with being civilized, underlined by the fear of being attacked and overwhelmed by blackness. This kind of racist language has been adopted by white nationalists and supremacists globally – including here in the US.

When neighboring Zimbabwe gained independence in 1980, a majority of the white people who had lived there, including Afrikaners, fled. Robert Mugabe, president of Zimbabwe until a coup in 2017, eventually resorted to tactics including violent seizure of lands from white farmers in an attempt to redistribute farms to black Africans. These policies failed for a variety of reasons and plunged the country into economic chaos. Yet the discord in Zimbabwe illustrated for decades everything the apartheid-loving Afrikaners had feared: blackness coming for what white Africans had worked for. As they watched, it was easy for some Afrikaners and other white Africans to fall back on the original sin of apartheid: the idea of baasskap – white supremacy, or white domination, specifically in the face of an unstoppable black population.

So the words of Donald Trump wrote on Twitter stoke old and deep fears used to perpetuate the mythos of white supremacy and are racist at their very core.

A classic dog-whistle to remind white South Africans – but more importantly, white folks in his fan base in the US, they are vulnerable to uncontrolled people of color. And that people of color must be controlled. As with everything the 45th President of the United States says, it is irrelevant that it is not true: deaths of white farmers in South Africa have dropped each year for decades, and they are but a tiny fraction of the overall murder rate in the country.

Additionally, the government of South Africa has been very clear in their response that no one, in fact, is seizing any land from white farmers. In fact, the South African government has already voiced their concern to the US Embassy. The South African Times has reported, “Dirco also urged the Charge d’Affaires to indicate to Washington that the people of South Africa‚ of all races‚ are working together through Parliament and other legal platforms to find a solution to this historic challenge and that President Trump’s tweet serves only to polarise debate on this sensitive and crucial matter.”

There are some profound similarities between South Africa’s apartheid history and US Jim Crow laws, segregation, and the Indian Removal Act. Trump’s Tweet is yet another call-and-response based on the vein that unites all of these policies: invoke the fears that cocoon the white supremacy of South Africa, and hear it reflected back from his racist fan base in the US. As my students learned, who we elect in the US does matter on the world stage. For both the US and South Africa, we have decades of reckoning left to achieve any type of racial reconciliation after the end of these policies. In the meantime, there are far more pressing concerns for each country than a false narrative about farms being taken. For both countries, the overwhelming concern is a black population in need. In need of clean drinking water, equal access to resources, and, as Madondo in Kliptown might say, opportunities for young people of color to rise out of the cycle of poverty.

At a time when hate crimes in America are at a five-year high and white supremacists feel free to walk the streets and openly run for political office on essentially baasskap platforms, this Tweet from our President directed at white South Africa isn’t just about South Africa.  It’s about our lingering demons at home and is another aim at stoking the fires of white supremacy that are burning in the US and Europe to spread beyond the local to a global scale.