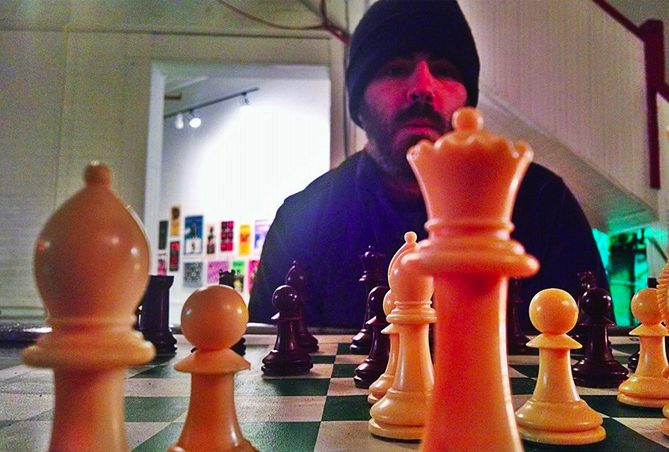 There’s a new club on the rise in Richmond for those of you who prefer your battles on a checkered board. RVA Pieces, Richmond’s newest chess collective, might be just what your mind needs to stay sharp and socialize.

There’s a new club on the rise in Richmond for those of you who prefer your battles on a checkered board. RVA Pieces, Richmond’s newest chess collective, might be just what your mind needs to stay sharp and socialize.

RVA Pieces was formed by Dave Murray a little over a month ago. Murray, a Richmond native and resident for over 20 years now, wanted to give chess-lovers like himself the opportunity to meet up and socialize over a couple games of chess.

“In short, it the beginning of a casual chess club,” said Murray. “[I created it] as a means to give the many chess players that I know who live here in the city a forum to connect and arrange games and so on.”

Murray has been using Gallery 5 as the venue for battle, and he admits the club is still in its infancy. “We can all meet and play, study, and formulate what sort of chess club we will become,” he said.

Murray said Richmond has a fairly active chess community and that you kind find different kinds of players around town.

“Go out to the barber shops around town and you will see groups of old school cats banging pieces back and forth, trading verbal barbs,” said Murray, who called chess a language.

“[It’s] a metaphor for life and study in workflow and problem solving,” he said. “It has a draw from the casual amateur to ranked players.”

When he’s not busy playing chess with RVA Pieces, Murray also volunteers over at Gallery 5.

“Aside from copious amounts of coffee and reading,” said Murray, “I put a fair amount of time volunteering at the aforementioned Gallery 5. I also am involved with Tom Doland’s annual Spiral project. I tend to gravitate to creative ideas and community driven projects. That and I also enjoy simple stuff like the river and the city on the whole.”

In the short time that the group has existed, RVA Pieces has become fairly popular in the community and over Facebook.

Murray said part of the inspiration for the club came after the passing of his friend and a local chess enthusiast Bob Hardtimes.

“I can’t think about chess and RVA and not think about him,” said Murray. “[I] Wish he was around to see this happening, I can’t help believe he would have approved.”

Murray believes the group could expand even further beyond chess.

“As it stands we have ample space and are all about folks playing whatever,” said Murray. “I have seen a GO board floating around, and someone was talking about Magic cards and another about bringing Backgammon. [We have many] open minds and such. I really want it to grow into whatever it becomes naturally.”

As for the future of RVA Pieces, Murray said he would love to see some tables placed in Monroe Park if the city continues to reshape the park. But first, he first wants to see how many people get involved, and encourages gamers of all levels to participate.

“Again at this point, this is a totally relaxed environment for chess and gaming,” said Murray. “Yeah, there are rated players, but there folks that are beginners and in between as well. If you have an interest, come on out.”

RVA Pieces has weekly events over at Gallery5. For more information, check out their Facebook page.