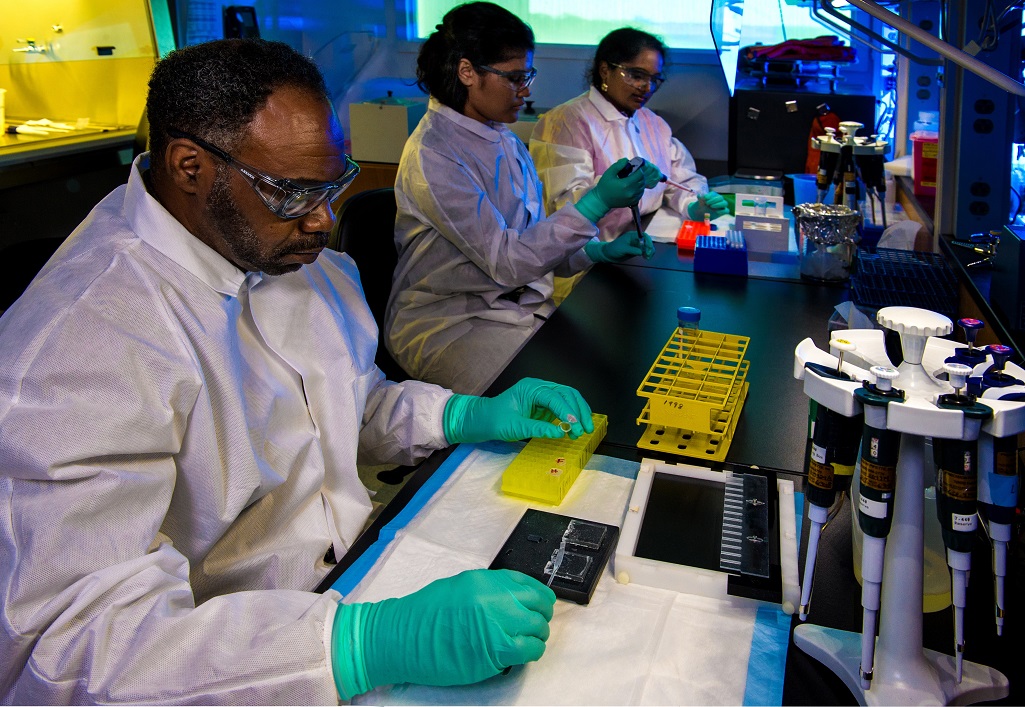 Earlier this month, black professionals in STEM and academia staged a one-day strike to point out systemic racism in their field. RVA Mag spoke to some local participants.

On June 10th, black members of the academia and STEM fields participated in a virtual strike commemorating the social injustice that has garnered more and more attention recently in light of the police killings of George Floyd, Breonna Taylor, and too many others.

The strike, which was reported on social media under hashtags including #SHUTDOWNSTEM, was created in order to demonstrate the loss of productivity to companies if black people did not work, said Kellianne Richardson, a STEM worker and doctor of pharmacology and toxicology.

“I was happy that virtually we created an affinity space where I felt like my voice could be heard,” Richardson said. “Even though there were no echoes of any response to the civil unrest that has been occurring, or for the PTSD it may create for black employees that feel like they really are really hurt by the human rights violations of George Floyd.”

Richardson said she’s disappointed in the STEM field for not taking a stand or making statements regarding the Black Lives Matter movement. While she appreciated the supportive statements from many companies in the wake of the protests, she said local companies like PPD, kaléo, and GlaxoSmithKline had yet to say anything about the Black Lives Matter movement.

“I was happy — I didn’t know that so many other types of industries were going to make a stand or say something about black lives,” Richardson said. “But I was really surprised that in STEM, there was no answer.”

Richardson said she didn’t want to share the company she works for right now due to concerns about reprisal from employers.

“I’m excited to try to share the opportunity to speak out but, you know, living in a small city like Richmond, you don’t want to be like Colin Kaepernick,” Richardson said. After drawing attention for kneeling during the national anthem to protest violence against black Americans, Kaepernick, a former NFL quarterback, found himself unable to secure a contract at the peak of his career. He’s been without a team for four years now.

“I don’t have millions of dollars, so that I could go without employment for four years until someone decides they’d like to be on my side,” said Richardson. “So it’s actually taking a risk to even say something.”

During every level of education she’s gone through, Richardson said she’s faced some sort of discrimination and systemic racism. One of many instances was when she was attending Oberlin College, an institution in Ohio known for its arts programs, where she earned her Bachelor’s degree.

After telling an individual that she earned a full scholarship to Oberlin, the person replied with “Oh, what sport do you play?”

“So the assumption was if I was in college, it was because I was playing a sport,” Richardson said. “I’m a smart alec, so I said ‘I play my brain.’’

After Richardson finished her undergraduate studies, she went on to apply for a job at Associated Press when she was 22 years old. The woman interviewing her made a comment about Richardson’s age, comparing her to her daughter who was the same age as Richardson. The woman said she wouldn’t trust her daughter with this much responsibility, implying Richardson shouldn’t be trusted with this big of a job either. At the time, she didn’t fully understand that this was something that shouldn’t be said to her during an interview. In hindsight, though, she feels that the comparison was totally unfair.

“Being from a black family, my culture is to work hard, and my culture is not to complain,” Richardson said. “How someone non-black would present at 22 years old, may have a different level of maturity than someone of a very self-driven first-generation college student from a black family. That person is going to have a lot more motivation, a lot less to fall back on.”

Richardson said this tone-deafness explicitly impacted her ability to find a job after college. Despite having a bachelor’s degree, she ended up working at an airline for only $8.50 an hour. She ultimately returned to college and completed a PhD in order to improve her prospects.

This inability to find a job based on systemic racism and underlying discrimination is a battle that Jaleesa Timberlake, another woman in the STEM field, has had to fight as well. Timberlake, who earned her undergraduate degrees in interdisciplinary sciences and Spanish and earned her Master’s degree in pharmaceutical science, currently works at a local company facilitating research for pharmaceutical companies prior to the approval of the drugs.

Even at this local company, Timberlake says there are almost no minorities in leadership positions.

“It’s still pretty obvious as a minority that it is very hard to climb up the [corporate] ladder,” Timberlake said.

Despite having three degrees, Timberlake echoed Richardson in saying she had an extremely tough time finding a job. Once, she interviewed alongside one of her white co-workers for a STEM-related job at a local company. Timberlake thought knew she had more experience and qualifications than her white co-worker, but she still didn’t get the job.

When she asked why, the company told her that they decided to go with someone “more qualified.” However, since she knew the woman who got the job, Timberlake knew this wasn’t true. She considers this rejection a decision based on race.

“For lack of a better word… it just sucks,” Timberlake said. “It sucks because you know that you’re able to do the job.”

Timberlake said she thinks she hasn’t been called back for certain jobs based on just her name.

“As much as I hate to say it, my name is Jaleesa Timberlake, so before I can even get a callback, I get the email of a rejection,” Timberlake said. “I feel like my name was something more Anglo-Saxon, like Jessica or Jennifer, it would be easier to not really know firsthand that, ‘Hey, this person is African American.’”

After numerous failed attempts to get ahead in her field, Timberlake said she’s decided to pharmacy school.

“For my last hope, I just got into pharmacy school. I’m going to go back, and hopefully that will be a determining degree,” Timberlake said. “What is there more to do? It’s sad that I even have to rack up almost $300,000 worth of debt just to try and seal the deal and close every single loop. I’m almost out of options. I don’t know what else is there to do.”

When it comes to combating racial injustice in the STEM field, Richardson said the least the STEM community could do right now is to offer some affinity space and listen to black workers, especially since they’re coming to work in the middle of a pandemic. Another thing STEM companies, and companies, in general, can do is to conduct exit interviews for those who’ve left the company, as Richardson said black people often leave companies because of racism.

“You have times like now where companies look around and say, ‘We don’t have any black employees. I wonder why,’” Richardson said. “Well, they left, and they had very specific reasons they may not have shared with you.”

Richardson said black people in the STEM field often “trade racism for a meritocracy” — meritocracy meaning the assumption that the person most qualified for a job will be the one who gets it. However, in the wake of brutality and killings conducted by police officers, she said this assumption of meritocracy has disappeared in the United States, as these officers clearly don’t care what merit these black individuals have.

“No one asked what Mr. Floyd certifications were when he had that knee on his neck for eight and a half minutes,” Timberlake said. “So, it was a real affront to black professionals everywhere because it said, ‘You know what? Your life doesn’t matter. It doesn’t matter what you do, how you conduct yourself. If you have your hood up or down. If you’re in broad daylight. If you’re doing right or wrong.’”

Top Photo by CDC on Unsplash

The COVID-19 pandemic has made it possible for doctors to move patient checkups to the phone, a positive step for many doctors and... READ MORE

RVA Magazine sits down with Alexsis Rodgers, a community activist and mayoral candidate for the City of Richmond, to learn more about her... READ MORE

The COVID-19 pandemic has made it possible for doctors to move patient checkups to the phone, a positive step for many doctors and... READ MORE

RVA Magazine sits down with Alexsis Rodgers, a community activist and mayoral candidate for the City of Richmond, to learn more about her... READ MORE