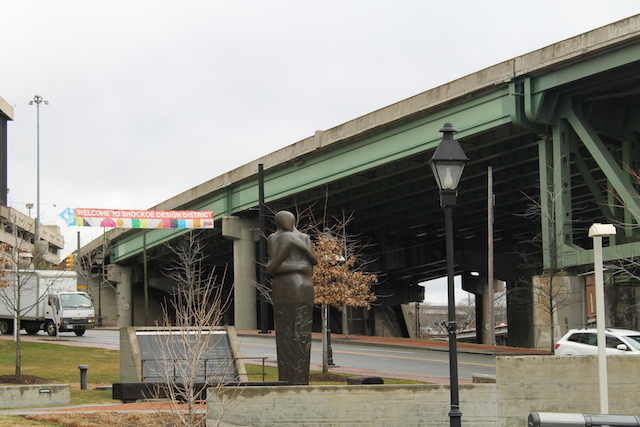 The main location of Mayor Jones’ coveted project to revitalize Shockoe Bottom is currently stark and uninhabited. There’s not much more than a street sign at the corner of 17th Street and Grace Street right now, but in a few years it may be where home plate is at the Flying Squirrels’ new home.

The main location of Mayor Jones’ coveted project to revitalize Shockoe Bottom is currently stark and uninhabited. There’s not much more than a street sign at the corner of 17th Street and Grace Street right now, but in a few years it may be where home plate is at the Flying Squirrels’ new home.

Some citizens of Richmond want to preserve Shockoe’s history. Others want to revitalize downtown by any means. City Council can’t quite decide if they support Mayor Jones’ plan. But as for the local business owners in Shockoe Bottom, well they’re now getting their voices heard.

Bob McNulty, owner of Siné Irish Pub & Restaurant, was emphatically in support of a stadium.

“I’m in strong support of it, very much so. I think this is the final piece of something that can transform the Bottom into a better place than what it is now,” McNulty said.

Gary Young of Richmond Cigar Factory has been in Richmond for about 20 years, said he’s seen a lot of changes go up and down. He doesn’t get as much foot traffic as McNulty, and said he’s half-and-half on the prospect of a stadium, but still thinks the area stands to benefit from the possible revitalization project.

“I find it a positive approach. It adds more traffic and more flair to downtown, the historical part,” Young said.

“I hope that it helps put Richmond back on the map in a lot of good ways, you know you have the Redskins stadium, you have VCU building it up, so this would be another area that could have a little sprucing up in some kind of way.”

David Bess, owner of Cha-Cha’s Cantina, has been in Richmond for eight years and likes the positive vibe and change of demograph going on downtown. He said it’s great that more college students are moving in downtown, but there just needs to be something to get people out of their apartments.

“For the summertime, I think it would bring more people downtown for the local businesses. More Richmonders would be more aware of the revitalization that is occurring downtown — a lot more apartments and new restaurants are opening up every day,” Bess said.

But Bess is not without his concerns. Having been in Richmond so long, it’s clear he cares about the welfare of the city and doesn’t want the city to gamble on the stadium and lose.

“I’d hate for us (Richmond) to spend money and really not see the broad picture. Let’s make sure the city does not put us into debt and dig ourselves a hole that we cannot get out of. There’s all this revitalization and the positives occurring, but I personally would hate for us to dig a hole that we can’t get out of, and then the City see itself in a decline, in financial trouble,” Bess added.

And it’s not just restaurant owners that have given the possible stadium thought. Anthony Lupesco, owner of Shocke Denim, shared Bess’ ambivalence and emphasized the need to remember Shockoe’s dark albeit important history.

“Honestly, at this point, I’m still kind of conflicted about it,” Lupesco said.

“I think it could have a really positive impact on the area, but I think they really need to figure out the memorial portion, flesh that out better than they have. I think, commercially, it could have a great impact. We need a grocery store down here, I think that’s awesome. It’d be nice to hear a more concrete plan and see a little more effort, maybe there has been and it hasn’t been publicized, but it doesn’t seem there’s as strong of a vision for the memorial as there is for the commercial aspect of it.”

Lupesco’s concern for preserving Richmond’s history is shared among a strong vocal minority of citizens who’ve been clear with their disapproval at recent City Council meetings.

Another concern is the problems that already exist in Shockoe Bottom. Evan Matthews, owner of Kulture, said it seems like Shockoe Bottom’s always forgotten about and swept under the rug.

“If you go two blocks west of 18th street, all the sidewalks and crosswalks have been redone, and then you get to 18th street and it’s just crap down there. The roads are crap, the parking is awful… They’re building all these condos and have all these businesses down there with no place to park,” Matthews said.

“I think once they actually get it up and running and open, it could potentially be awesome for that area, but it’s gonna take them what, 3-5 years to complete that project? So what’s gonna happen to the already bad traffic problem and bad parking problem in the Bottom down there? If they’re gonna do it, (they have to) get off their butts and do it already.”

The common denominator in each business owner’s opinion is they feel a stadium has the potential to be good for the city. David Bess summed up their concerns best.

“I think as a whole the Mayor is trying to do his best to revitalize downtown. Personally, I’m an advocate of the stadium…But again I would not want that to jeopardize the future of the city over a stadium,” Bess said.

Last week, City Council President Charles Samuels said it may be another month before the public will know whether a stadium will be coming to Shockoe Bottom.